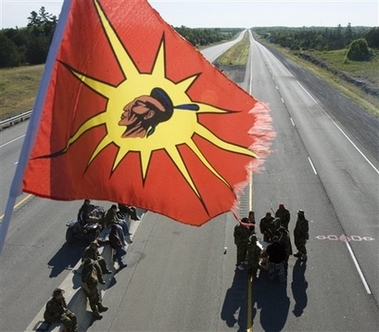 More than a dozen Tyendinaga Mohawks in southern Ontario are facing arrest for opposing an expensive new police station, paid for in part by the Federal Government of Canada, and for demanding the closure of a second landfill that is believed to be destroying and contaminating local water sources. An estimated 80 per cent of the community’s water wells are currently contaminated.

A total of 27 criminal charges have been laid, all of which are said to be in connection to a set of protests that were held on October 27 and 29.

However, as a November 5 statement from Tyendinaga Mohawk Territory explains, the charges seem moreso aimed at silencing those from the community “…who maintain scrutiny over Band Council operations and spending.”

“[It] amounts to an unprecedented attempt to criminalize and jail any effective opposition that exists in the community. This is an attack on our families, our children, our culture and the way we think. This has moved beyond a simple community dispute. The federal government is making a final push to eradicate those people who believe in the strength and power of the Mohawk Nation and who will stand in its defence,” the statement reads.

As for the police station, the community’s concern is that the Tyendinaga Band Council, with the support of the Federal Government, is ignoring the water crisis. They say the money used for the needless building, which cost $1.9 million, should be allocated toward providing safe water and for addressing poor housing conditions in the community.

Concern over the quarry operation, on the other hand, is stemming from “the tremendous speed with which [it] has been established and grown in size,” continues the November 5 statement. “Community members are aware of the extremely rigorous environmental study and assessment practices that are required before quarries and aggregates can be established elsewhere in the province. Such laws do not apply on reserves and concern as to whether environmental and safety assessments have been properly conducted and meet recognized professional standards.”

“These fears have increased in recent weeks as households in the direct vicinity of quarry operations have experienced water problems and collapsed wells for the first time ever.”

“The quarry is operated by Build-All Contractors, a company owned by [Tyendinaga] Police Chief Maracle’s brother. The site preparation and overseeing of the building construction at the site of the new police station was also awarded to Build-All, the Police Chief’s brother, in an untendered contract.”

“With army helicopters and fighter jets circulating the Territory today, the Federal Government of Canada is making it clear that it intends to exercise what it views as its interest in community affairs.”

For background and more information, please head over to the Tyendinaga Support Committee website, www.ocap.ca/supporttmt/.

From venezuelawearewithyou.blogspot.com – The community has asked that outside supporters contact the Band Council and respectfully express your concerns that community consultation take place, before the police station is brought to Tyendinaga Mohawk Territory, against the wishes of community meetings and discussions that have taken place so far.

I am calling to express my concern at the impending arrival of a new police station in Tyendinaga.

We recognize that this initiative is partially funded by Canada’s Ministry of Public Safety, headed by Stockwell Day. However, we have been informed by community members that there is a great deal of community concern over the lack of consultation by Band Council. Please take the time to consult.

Please hold off on the immediate implementation of a $2 million police station, while the community’s concerns about clean drinking water and the Culbertson Tract Land Claim remain unresolved. We are asking that you take the time to consult properly.

You may also want to contact the federal government about their financial support of the station over water and housing issues, as well as their refusal to resolve the Culbertson Tract land claim.