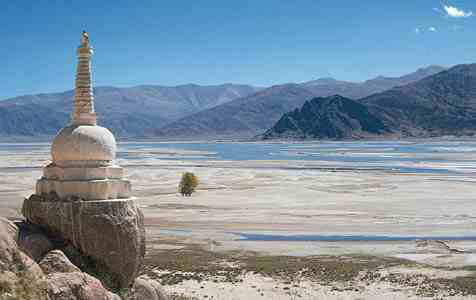 Hundreds of Villagers in the Tibet Autonomous Region (TAR) are “facing off against armed security forces” over a planned gold mine on what the Tibetans consider a sacred Mountain.

“Tibetans have historically worshiped the site,” explains a May 24 report by Radio Free Asia (RFA). But now the Chinese mining and timber company, Zhongkai Co., has been authorized to go ahead with their proposed gold mine.

The villagers have declared that they are “ready to die” to protect the sacred site.

According to one villager, the standoff began after “a contingent of police and security forces arrived” on May 16. The Tibetans began protesting several weeks earlier.

When the security forces appeared, the villager continues, as many as 500 Tibetans gathered on the road that leads to the mine site—and have stayed there ever since.

“Today another four vehicles with roughly 30 to 40 soldiers in them went to the protest site. But the Tibetans all put religious books on their heads and are vowing to resist even if it means sacrificing their lives,” he adds.

The villagers also say that the soldiers and police have declared that they are willing to “force their way through” to get to the site.

This ongoing standoff is connected to a much wider scheme to ransack Tibet of its mineral resources, particularly its gold.

According to a 2007 report by Students for a Free Tibet (SFT), there are at least seven foreign mining companies in Tibet right now: five of them from Canada and two from Britain.

The People of Tibet have absolutely “no voice when it comes to how their natural resources will be used”, says the SFT’s Stop Mining Tibet campaign website.

This ongoing standoff is unfortunate proof.

Based in Canada, Stop Mining Tibet is pushing for a moratorium on all resource extraction in the occupied region “until the Tibetan people can freely determine the use of their own resources – particularly non renewable resources.”

It is an immense challenge, but also one that we must take on as diligently as those Tibetans who are putting their lives on the line right now: in the name of justice and the preservation of their way of life.

Sign a petition to Support the Call for a Moratorium