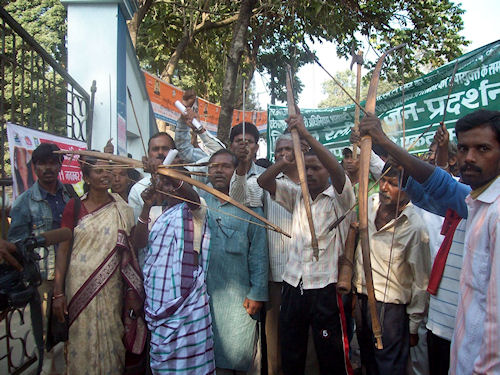 Thousands of indigenous people from Talsa village in northern Jharkhand, India, must now face the prospect of displacement—in addition to lung cancer, skin diseases and physical deformities as a result of a nearby open cast uranium mine, which has operated for decades. The Uranium Corporation of India Limited (UCIL), who runs the mine, is attempting to gain control of the villager’s land for a new tailings pond. The village is doing everything in their power to resist. Gladson Dungdung, a Human Rights Activist and writer from Jharkhand, reports.

The state of Jharkhand known as the abode of Adivasis (Indigenous People), containing 40 percent of India’s minerals, has been witnessing a series of people’s resistance against unjust development for decades. The industrialization has been chalked full of investor uncertainty and city dweller middle class cries foul but the anger of the Adivasis against the land acquisition for development projects is not calming down in the state. In a fresh incident, thousands of Adivasis from the Talsa village near Jamshedpur entered into the offices of the Deputy Commissioner of East Singhbhum at Jamshedpur on May 19, to resist the Uranium Corporation of India Limited’s (UCIL) drive to acquire their land for its new tailing pond near Turamdih mill.

The villagers started gathering in front of the Deputy Commissioner’s office in the morning. They were armed with the traditional weapons – bows, arrows, axes, swords and sickles. The agitators with placards, banners and traditional weapons were up in arms against the PSU under the leadership of the village chief Durga Charan Murmu. The Adivasis became angry when UCIL informed them of its land acquisition drive through a public notice last month. The company proposes to acquire 276.62 acres of land for its tailing pond project. The tailing pond will be used for dumping waste generated from UCIL’s Banduhurang mines. The villagers have been fighting UCIL for compensation since 1983 but their issues were never addressed, and now they have have joined hands against the company’s new project.

The Adivasis demanded that the Deputy Commissioner should come out of his office for receiving the memorandum. They rejected the officers’ plea to submit their memorandum to sub-divisional officer Kartik Kumar Prabhat who was present at the spot in the capacity of the Magistrate. After a hue and cry of the district administration, the villagers agreed to submit their memorandum to the Additional Deputy Commissioner (ADC) H.N. Ram who arrived at the spot. “We have taken the memorandum and would look into the demands made by the villagers,” H.N. Ram said. The villagers called off the protest after the ADC promised the villagers to look into the matter and take the appropriate action.

The painful suffering of Talsa village began with the notification for land acquisition in 1983-84. According to the agreement made between the Talsa Gram Sabha and UCIL management in 1983, the company promised to provide employment for two to three members from each displaced family. Accordingly, the UCIL management started making appointments and providing jobs to 45 displaced persons by 1988. But in 2000, the management suddenly decided to resume the extension project and went ahead without fulfilling its commitment. The majority of those displaced between 1984 and 1985 were not rehabilitated properly and left in isolation.

According to the 2001 Census , the total population of Talsa village is 912. The village is highly dominated by Adivasis with the population of 889. Presently, the village population has increased—therefore approximately 1500 people will be completely displaced if the company acquires the land. These villagers have already given half of their agricultural land to the UCIL but now the company plans to acquire the entire village. The villagers are strongly resisting it.

Section 144 (a law that prevents the assembly of five or more people and gives the government “absolute power” in “urgent cases of nuisance or to apprehended danger”) has been imposed by the Gram Sabha after a meeting of villagers on May 10. According to the village head Durga Charan Murmu, the UCIL failed to meet its promises made in 1983 therefore Adivasis don’t want to give their lands to the company at any cost. “Most of the villagers depends on agriculture for their livelihood, we have a place of worshiping our God and our culture is based on land therefore we don’t want to lose our remaining land any more,” Murmu said.

The people of mining areas live in constant threat due to radiation as there are open cast uranium mining projects being operated. After the uranium ore is mined and processed, the “yellow cake” is sent to the Nuclear Fuel Complex in Hyderabad for enrichment. The waste is then brought back to the UCIL complex for further extraction. Finally, the waste is dumped into the ponds, which is open and unprotected. In the last year during the rainy season, the radioactive waste from the tailing pond of Turamdih uranium mines spilled over into the village’s wells, ponds and fields. The UCIL admited it but denied its threat to life due to radiation. But the fact is aquatic creatures died, fishes got strange diseases and crops were affected therefore the villagers had stopped using water of the pond and wells.

However, the UCIL claims that it has not seen any effect of radiation on its workforce. But the people’s lives are in danger in the uranium mining areas of Jharkhand. Precisely, because on the one hand, they lose their land and do not paid sufficient compensation as promised, and they also suffer from chronic diseases like lung cancer, skin disease and physical deformities caused by radiation on the other. In fact, lives have been lost, cattle have died and human suffering is ongoing but the state who’s duty it is to protect the rights of these people, instead promotes the nuclear terror in the name of development. Therefore, the Adivasis of Jharkhand have decided not to surrender their land for any project and fight against such terror, which has carried with it a heavy cost on the villagers for decades.

Gladson Dungdung is a Human Rights Activist and Writer based in Ranchi, Jharkhand. He can be contacted at gladsonhrights@gmail.com gladson@jharkhandi.com. Note: the writer’s blog is www.indigenousindia.blogspot.com