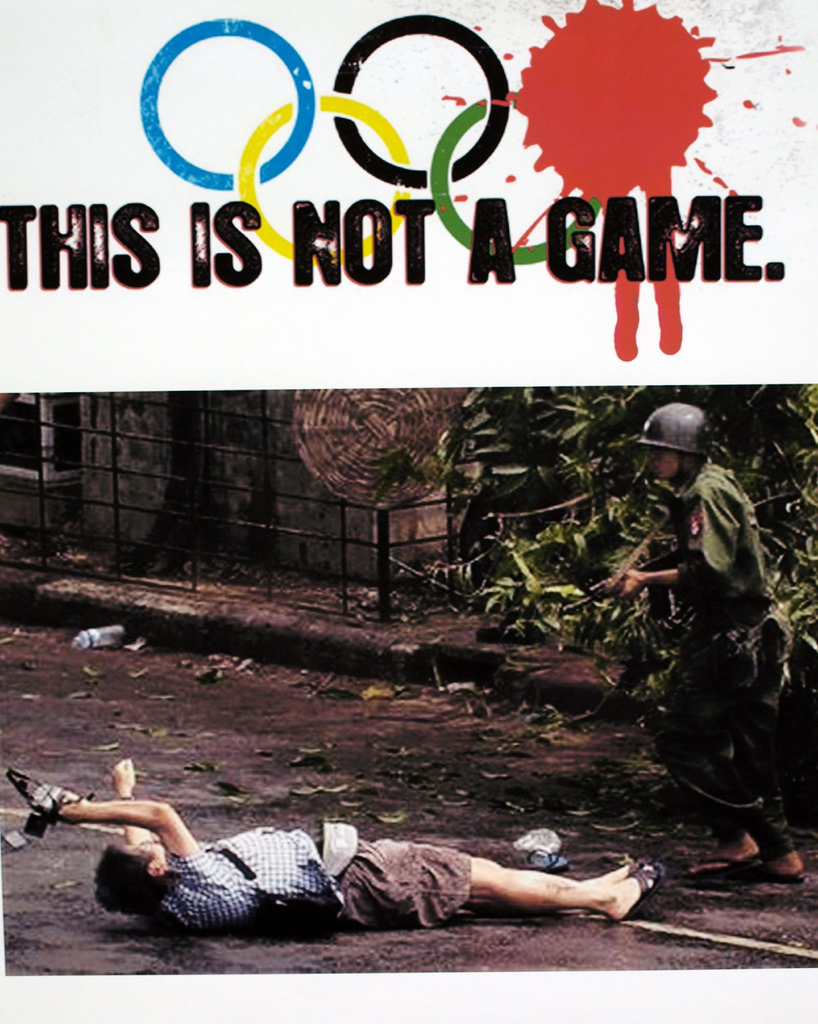 The London 2012 Olympics have some ‘killer sponsors’

Image by Taekwonweirdo, on flickr. Some rights reserved
Support our journalism. Become a Patron!

When we think of the Olympics, we conjure up images of honour, integrity, and fair play. It’s a celebration. A tradition. A peaceful time when athletes from around the world can challenge themselves and let us share in some of that “Olympic pride”. We can even take some of that pride home with us in the form of t-shirts, key chains, and gastroenteritis.

But what about the dark the underbelly of the games? It’s always been there, hasn’t it? Like a wounded kid at the supermarket that everybody tries to ignore.

There have been so many controversies over the years, not to mention crimes like slavery, child labour and human trafficking. Oh, and displacement. Did you know that more than 2 million people have been displaced for the games just in the last twenty years?

The Olympics committee loves to tell us they’re above all that insanity, but they’re neck deep in it.

For more proof, we just have to look at the sponsors of 2012 Olympics in London. Three of them are being targeted in the new Greenwash Gold Campaign by London Mining Network, Bhopal Medical Appeal and UK Tar Sands Network.

The campaign was launched today, April 16th, the official start of the 100 day countdown to the 2012 Olympics.

The BBC reports that Meredith Alexander, commissioner of the 2012’s sustainability watchdog, recently quit her job in protest over Dow Chemical Company’s involvement in the Games.

“The Dow Chemical Company has a long, sordid, history of environmental crimes spanning many decades,” says Greenwash Gold. “It produced Agent Orange to be sprayed up on innocent Vietnamese people; it developed napalm into a lethal weapon of mass destruction; it has bribed officials in order to register banned, dangerous pesticides; and it has regularly poisoned the rivers and the air around its factories. After World War II, who do you think employed the Nazi scientist known as “the Devil’s Chemist”, found guilty of “enslavement” and “mass murder” at Nuremberg for his role in the Buna factory at Auschwitz? Step forward Dow Chemical.”

Then there’s Bhopal. Colin Toogood, from the Bhopal Medical Appeal, recently stated: “The Dow Chemical Company are the owners of the Union Carbide Corporation wanted, in India, on the criminal charge of culpable homicide. The Bhopal disaster site has never been cleaned up and highly toxic chemicals are now found in the drinking water of over 30,000 poor people. If we can clean up the London Olympic site in readiness for the games, why can’t Dow take responsibility for cleaning up Bhopal.”

The Bhopal Disaster took place in December 1984 when a Union Carbide pesticide factory in Bhopal, India, released 27 tonnes of lethal gases, killing around 25,000 people and maiming over half a million others.

Viewers of the recent National Aboriginal Achievement Awards in Canada will remember this name, since they also sponsored the nationally-televised event (along with a couple other notorious mining companies: Teck and Goldcorp).

The metal for the 2012 Olympics medals is being provided by Rio Tinto.

Cherise Udell, the founder of Utah Moms for Clean Air, recently stated, “I was delighted to learn that the 2012 Olympic committee was aiming for the greenest Olympics ever. Then I heard that Rio Tinto metal from our controversial Utah mine would be used to make the medals. In Utah, Rio Tinto are the number one emitter of toxins known to cause harm to human health. Every year, between 1000 and 2000 Utahns die prematurely due to chronic air pollution and Rio Tinto’s Bingham mine is responsible for about 30% of this.”

Elsewhere, in Australia, the company’s Ranger Uranium Mine inside the Kakadu National Park routinely spills radioactive water into the surrounding area. Since day one, the mine has been strongly opposed by local Indigenous peoples.

In Bougainville, in the Pacific, the company is attempting to reopen a copper mine which caused such catastrophic pollution that local people closed it down. Rio Tinto was directly involved in the Bougainville civil war in which 15,000 people died between 1989 and 1997. (Incidentally, during the Spanish civil war, Rio Tinto “applauded Franco’s forces for assassinating strikers and a group of radical miners who occupied their mines”.)

And back to the US, Rio Tinto was involved in a major controversy that led to the destruction of Eagle Rock, a sacred site to the Keweenaw Bay Indian Community (KBIC) in Michigan. The company also has a legacy of pollution in Wisconsin, and it is planning more destructive projects in Alaska, Minnesota and Arizona.

A name that we all got to know after the Deepwater Horizon disaster in the Gulf of Mexico, BP “landed the prestigious title of ‘Sustainability Partner’” for the 2012 Olympics – which is quite remarkable since “[it] is one of the most unsustainable companies on the planet. It is entirely focused on extracting every last fossil fuel it can get its hands on, including tar sands, the most destructive industrial project on the planet. If the Canadian tar sands are fully exploited as planned, they will contribute more than 10% of all the carbon emissions that humanity can afford to emit, ever, if we are to prevent runaway climate change. Extracting oil from tar sands also destroys swathes of boreal forest, uses huge amounts of fresh water, and causes soaring rates of illness in local communities” says Greenwash Gold.

“The irony of BP sponsoring the “Greenest Olympics ever” is actually palpable in the Gulf of Mexico. Although the BP media machine professes all is well in the gulf, oil and tar balls still wash ashore with dead dolphins, turtles and other animals; people are sick from toxic exposure, and fisher communities have lost their livelihood,” comments Bryan Parras, Gulf Coast Fund for Ecological Health and Community Renewal.

“How quickly the world forgets that on April 20, 2010 — the 40th anniversary of Earth Day— the United States experienced the largest oil drilling disaster in history. BP’s blowout introduced 200 million gallons of oil and 2 million gallons of toxic dispersant into the Gulf, the effects of which we are still dealing with today.”

This is not a game
As the late Howard Zinn reminds us, “we can’t be neutral on a moving train”. Nor can we be neutral in a stadium or in a comfy chair at home when those who helped to bring us the games are wreaking havoc around the world.

We can pretend, but that doesn’t change the facts. By doing nothing, we’re enabling them to do more; and if we’re benefiting from their malignant labors, we’re also partly responsible for them.

So before you settle in with your large cup of flavored sugar water, make sure you know who’s doing what – and if you’re feeling emboldened, do something to support those who are being chopped down and crushed in the name of peace.