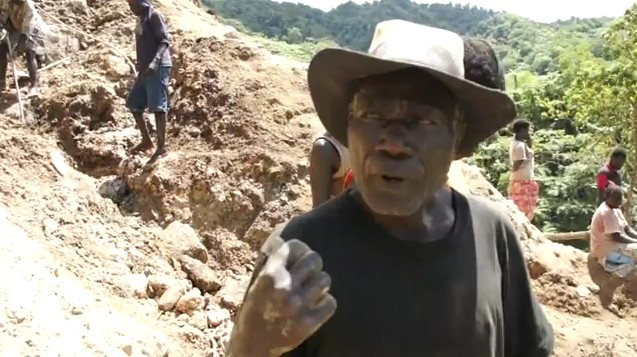 Saving Our Land: The People of Bougainville Speak Out

Clive Porabou’s new documentary “Saving Our Land” gives voice to the silent majority of Indigenous People in Mekamui/Bougainville who are against Rio Tinto’s plans to re-open the notorious Panguna mine.

Rio Tinto talks a lot about re-opening the Panguna mine and the media talks about it even more; but you hear a very different story when you’re on the ground, in the Autonomous Region of Bougainville, Papua New Guinea.

As Clive Porabou’s new documentary “Saving Our Land” shows us, the People of Bougainville say something else entirely. The talk about “justice”, “compensation”, “remediation,” “independence”.

The mine at Panguna was a massive revenue stream for the Government of Papua New Guinea from 1972 until 1989, when production at the mine was brought to a grinding halt.

Bougainville leaders at the time alleged that the mine was having a devastating impact on the island’s environment. Of course, it was true, since the company behind the mine, Bougainville Copper Ltd. (BCL), had been flushing its tailings directly into the Jaba River, essentially turning the river into a vein of toxic sludge. Fish and other wildlife died, the once-fertile valleys became uninhabitable and the People of Bougainville suffered in ways that can’t even be measured.

In addition to the environmental, social, economic damages cause by the mine, The Bougainville leaders said that BCL, which is a subsidiary Rio Tinto, had installed a system of apartheid on the island.

These and other grievances ultimately led to the formation of the Bougainville Revolutionary Army (BRA) and the reawakening of Papua’s secessionist movement.

After the BRA declared war on the mine in 1988, The PNG government sent in the the PNG Defence Force (PNGDF) and a brutal ground war ensued.

Rio Tinto shut the mine down in 1989, but the post-colonial war raged on for another 8 years, until a ceasefire was declared in 1997. As many as 20,000 people lost their lives during those 8 years.

The memory of that war hasn’t faded in the minds of the People of Bougainville, much like the memory of what the Panguna mine brought to their land.

As Clive Porabou notes on his website, the Jaba River is just as polluted now as it was in 1988. BCL has done nothing to clean it up. Nor has the company even tried to offer compensation for what the people of Bougainville have endured since the mine opened: the loss of soil and food crops, the loss of homes and land, the loss of fish and clean water… the loss of life.

Rio Tinto would rather just “move on” so they can get back to work on that massive open pit mine. It’s an issue that Porabou explores in his first documentary film, titled, “The Panguna Mine Dilemma“.

“Saving Our Land“, a follow-up to his first film, focuses in on the “silent majority” of Indigenous Papuans on the island of Bougainville and what they have to say about the mine. The 40-minute documentary is expected to be finished sometime this summer.

Related News
Women Landowners Oppose Attempts By Rio Tinto/Bcl To Reopen The Death Mine
Blood and Treasure: SBS Dateline Special Report (video)
Re-opening of Panguna Mine is not negotiable
Panguna mine ‘is for all Bougainvilleans’
Mekamui Message: No More Mining, No More Bloodshed (video)
PNG: Bougainville women the ‘forgotten victims’
Bougainville landholders sign agreement with Canadian miner
Bougainville rebel group lays out demands before mining will be given go-ahead