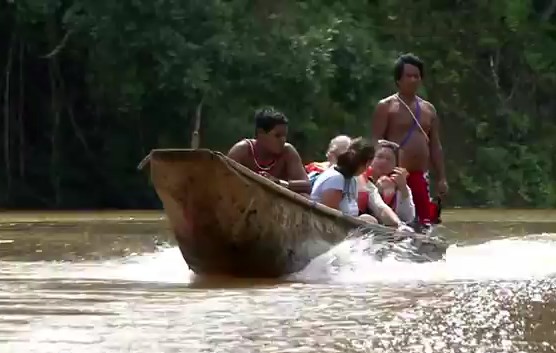 Survival in the “Modern” World: The Compromise

Survival in the “Modern” World: The Compromise is the pilot project for One year One World (OYOW), an initiative dedicated to raising awareness of ‘lesser-known’ Indigenous Peoples and communities around the world.

Synopsis, by Maggie Padlewska
In this age of globalization, as everything becomes increasingly interconnected, one can’t help but wonder what impact this is having on ancient traditions, customs, beliefs, and wisdom.

Thanks to the generous support of donors and OYOW supporters, I was able travel to Panama to shoot and produce the very first OYOW video seeking to raise awareness about the circumstances and issues facing a community living in the thick of the Panamanian rainforest.

I chose to meet with the Embera Peoples. First, because they are one of the few remaining pre-Columbian tribes of Central America, second, because in 1994, a part of their land was declared a National Park (with that, the implementation of rules to preserve the region’s natural environment and wildlife), and third, because I was concerned about the communities’ wellbeing under this new set of regulations.

No longer able to hunt freely to sustain their livelihoods, the Embera communities turned to cultural tourism as a way to earn money (thus buy food) for their communities.

Were the Embera peoples forced to embrace tourism as a means of survival after being prohibited from hunting? What implications has this had on the tribe’s traditional lifestyle and cultural survival? Is the tribe being exploited? These are some of the questions that I asked the Embera Drua and Embera Quera, two indigenous communities currently living on government land.

The focus of this piece is the result of numerous and lengthy conversations with Embera community leaders. The objective of the OYOW initiative is to provide people and communities with an opportunity to discuss and share the issues affecting them most during the timeframe of my visit.

I hope that this piece helps explain the current situation and circumstances faced by these tribes and how they are doing in an age that, in recent years, could have led to their cultural extinction.

NOTES:
1. Embera Drua leader, Johnson Meguimasa, taught himself to speak English in his village by studying and reading English text books. He now travels to and from Panama City to complete a college degree and hopes to become a teacher of the Embera language.

2. The young man commenting about the natural medicine being used to treat his colleague after being bitten by a venomous snake is Marco Flaco, the son of Embera Quera tribe leader Antilano Flaco. He learned to speak English in Kansas, USA, after receiving a scholarship from the Panamanian government. That was his first journey abroad.

3. Johnson Meguimasa adopted the monkey seen in the video. He tells me that he found “Jimmy” in the forest after the orphan fell from a tree. Johnson nurtured Jimmy back to health and is now a welcome houseguest in their family home.

4. My sincere apologies for the typo “tought” in the video.

A very special and profound THANK YOU to everyone who made this journey possible!
Including: the Padlewski family and friends, all donors, Hostel Panama by Luis (for donating a room to OYOW), Paul Merritt (for taking great care of my beloved Lola), all the wonderful people I met during my visit to Panama, Amber and Jason Behm, and everyone who helps make this possible through ongoing support!

Again, on behalf of the Embera communities and myself — I sincerely THANK YOU!!!