Supporters arrested at Barrick Gold mine in Lake Cowal 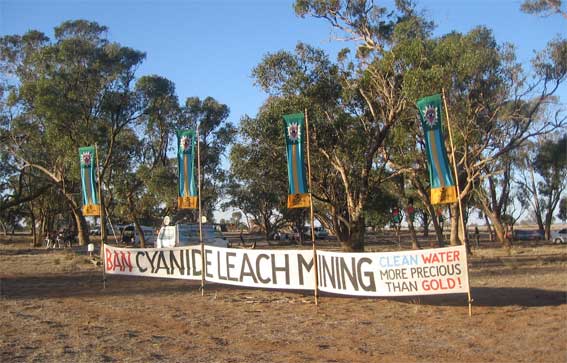 Yesterday, a group of Wiradjuri Traditional Owners and supporters entered Barrick Gold’s mine site in Lake Cowal, New South Wales, to conduct a Smoking Ceremony and document the mine’s impact on the region.

“Wiradjuri cultural items and places have been damaged and destroyed including tens of thousands of stone artifacts, ancient ceremonial areas, marked trees, and traditional camp and tool-making sites to make way for this mine,” explains Neville ‘Chappy’ Williams, an activist and Wiradjuri Traditional Owner. “Barrick has stolen more than 10,000 artifacts from the mine area, but has refused to release details and to hand them back.”

The Smoking Ceremony, held specifically for the artifacts, was conducted by the Wiradjuri, while one group of supporters blockaded the front gates of the mine, and another surveyed the site “to bear witness to the destruction and document the mine’s impact” on the land.

“The supporters were authorised by us, the Traditional Owners,” said Williams, who recently won a court injunction against a proposed expansion of the mine.

Unfortunately, the authorization was ignored by police, who arrested 28 of the supporters for trespassing on what they claimed to be ‘private property’ owned by Barrick Gold.

“It seriously highlights the continuation of cultural genocide in Australia,” stated Nectaria, one of the arrested supports. “To be charged with trespass, after being invited onto Wiradjuri country by Traditional Owners undermines and discredits any claims by the federal and state governments that they are taking on the issues of the environment, Aboriginal health and Aboriginal sovereignty.”

As explained on the Save Lake Cowal website, “Lake Cowal is the largest inland lake in New South Wales, and the sacred heartland of the Wiradjuri Nation. It has been a site of ceremony and gatherings for over 4000 years.”

The Wiradjuri were never adequately consulted by Barrick Gold, who “desecrated the sacred ground and felled river red gum trees and laid water pipes and an electric transmission line. Dozens of trees that sheltered Wiradjuri people from the elements for hundreds of years and held historic markings of generations have been eradicated.”

Never looking back, the company has used up tp 6,000 tonnes of cyanide and other hazardous chemicals at the mine each year. The cyanide is “freighted by train over 20 rivers, through 10 national parks and through 200 towns and trucked through densely populated areas of Sydney from Chullora to Parramatta and the World Heritage listed Blue Mountains.”

Needless to say, the prospect of contamination is an immense concern: not only now, as Barrick continues to ransack Lake Cowal of its ore, but long into the future as well….

After Barrick gold has left the region, their two massive tailings dams will remain, both of them 1.2 kilometers wide.

Such a legacy is unacceptable to the Wiradjuri, who have been fighting the mine since day one. They will continue to do so: in the name of protecting their knowledge, sacred sites and cultural resources, and defending the land and water for all life in the region.

Their supporters will continue to stand with them, regardless of any faulty charges laid against them which violate indigenous rights.