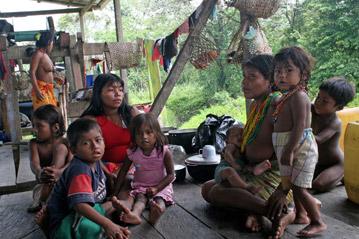 More than 2,000 indigenous Embera people have fled from their territory in the Colombian department of Choco, leaving 25 villages abandoned.

“People panicked and ran where they could; some got lost. An old man from our community got separated from the group and was bitten by a snake. When we found him in the morning he was dead,” states one Embera leader.

It’s been going on since the arrival of “a newly formed irregular armed group” to the region last month, who has been “fighting the local guerrilla group for control of the territory,” explains the United Nations High Commissioner for Refugees (UNHCR).

The Embera say that the intruders became increasingly violent, leaving them with no choice but to seek refuge in other communities in the region.

A UNHCR team interviewed some of the displaced people during a mission last week. “A group of 14 men and teenagers” from one community “said they had been tied up, threatened and badly beaten”. In another community, “two boys aged 13 and 14 said they were kidnapped for several days and forced to act as guides in the surrounding jungle.”

They also heard reports of “systematic sexual violence” against Embera Women, including two cases of attempted rape and a “mass rape.” However, the UNHCR warns, “there could be more cases that are not being reported because of [a] cultural taboo.”

The UNHCR further warns that several of the hosting villages are now under an immense amount pressure, and with cramped conditions there are “serious health concerns.”

“In all places, there is a shortage of food and shelter,” they report. “Everywhere medical attention is short, with an almost complete absence of civil state authorities.”

“In some [communities], like Puerto Meluk, there are serious health concerns due to the cramped shelter conditions. Diarrhoea and pulmonary infections are widespread among small children and a four-day old Embera baby died last week in Puerto Meluk. There are also cases of tuberculosis, as well as chronic malnutrition.”

“This is not a new experience for the Embera people,” notes Voice of America News. “They have been repeatedly displaced by fighting between the nation’s largest guerrilla group, the Revolutionary Armed Forces of Colombia, or FARC, and a right-wing paramilitary group called the United Self-Defense Forces of Colombia.”

In total there 27 indigenous groups considered to be at risk of extinction in Colombia, all of whom depend on being able to remain on their traditional lands. “But, unfortunately, many have been driven from those lands and they have been dispersed throughout the country, sometimes in distant urban centers, says the UNHCR. “And, we fear that many of them will never go home.”