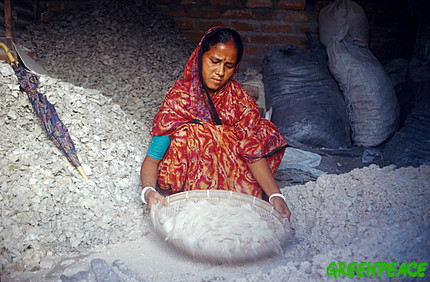 While the Canadian Government takes great care to ensure its own safety against the dangers of asbestos, you’ll probably never hear them make too big a fuss about it–what with Canada being a leading exporter of the patient killer –it just wouldn’t any sense, economically, to draw attention to it.

So instead they’re using tax-payers dollars and their own embassies to actively promote the sale and distribution of asbestos to countries like India and Pakistan. On top of that, the government is actively trying to sabotage the U.N. Rotterdam Convention, which aims to protect life and the environment by controlling the hazardous chemical and pesticide trade industry.

To mark World Health Day, April 7, 2008, a handful of organizations from India wrote a letter (pdf) asking Canadians to help stop the government from exporting asbestos to India and the global south.

We urgently request your solidarity with workers in India and the Global South. We appeal to you to please ask your government to stop exporting asbestos.

95% of Canada’s asbestos is exported to India and other countries where it is handled by desperately poor workers under dangerous conditions and is creating a public health tragedy of disease and death. Over 100,000 workers are exposed to asbestos daily in India and are falling sick and dying from Canadian Chrysotile asbestos. And it is not just the workers who suffer; their families bear the burden of the disease too by losing their sole bread winner and are left destitute.

We appeal to you to listen to our plea and support the health and lives of workers in India and the Global South. We have few protections and we need your help.

On 5th February 2008, all the major trade unions of India and labour support groups including the All India Trade Union Congress, Centre for Indian Trade Union, New Trade Union Initiative representing workers in India called for a ban on asbestos. Please listen to the voices of workers in India.

Coulombe told Aasif that Indians could handle the toxic pollution because of their “natural antibodies.”

On the subject of asbestos, there’s another issue you should be aware about: That being the presence of asbestos in government-funded houses on reserves across Canada.

It was a “hot issue” a good four years ago, thanks to the tireless efforts of Raven Thundersky, who grew up in one of those government “free” houses. Thundersky has lost a total of SIX family members to asbestos-related diseases, both her parents and four sisters.

She rightfully tried to sue the US company that made the insulation, W.R. Grace company. But she failed time and again, because Canadian government stopped her.

In 2008, W.R. Grace had a total of 112,000 lawsuits layed against them, on behalf of American citizens who were negatively impacted by their own exposure to asbestos.

To avoid a ruling, W.R. Grace ultimately agreed to a settlement, a a $2.9 billion settlement for the 112,000 victims. If Canada hadn’t interfered, Thundersky probably would’ve been among them; but she wasn’t.

If she had her way, Raven would take her case to the Hauge, where Canada could be embarrassed “in front of the whole world.”