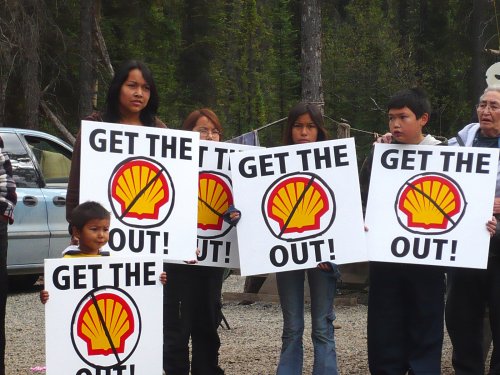 On Tuesday, Aug 21 Shell attempted to resume its coalbed methane operation in the Sacred Headwaters, despite previous warnings of a possible conflict if they attempt to do so. 100 People promptly came together and set up a blockade, preventing Shell from entering.

This is Shell’s first attempt to re-enter the area since 2005, when they were evicted by members of the Tahltan First Nation.

Press Release, from the Dogwood Initiative – Victoria, August 21, 2007 – Shell’s access to the Sacred Headwaters in Northwestern BC was blocked today by over 100 First Nation protesters as the company attempted to resume its coalbed methane operations in the area. This is Shell’s first attempt to re-enter the area after it was evicted in 2005 by members of the Tahltan First Nation concerned about the impact the project would have on their traditional territory and Shell’s lack of consultation.

Shell attempted to enter the area at 11am this morning despite warnings of a likely conflict from First Nation and Environmental groups. Shell was met by apporximately 100 protesters shouting and waving signs saying “Get the Shell Out”.

In addition to First Nation protests, the cause of protecting the Sacred Headwaters has been taken up by the international environmental community. Last month, 14 groups including Greenpeace, Friends of the Earth, NRDC, David Suzuki Foundation and Sierra Club wrote Shell urging them to back off and warning them of potential conflict.

“We are very disappointed that Shell has decided to proceed in this manner and disregard the wishes of the Tahltan First Nation.” said Will Horter, Lawyer and Executive Director of Dogwood Initiative, a watchdog organization monitoring the situation and one of the letters signatories “They have grossly underestimated the amount of opposition to this project.”

The Sacred Headwaters is the birthplace of three of BC’s most important wild salmon rivers, the Skeena, Nass and Stikine. The intact landscape supports large-scale predator- prey relationships with globally significant populations of caribou, mountain goats, stone sheep, moose, grizzlies and wolves. Coalbed methane developments in jurisdictions outside of BC have left fragmented landscapes, contaminated fresh water aquifers and disrupted ecosystems; despite widespread exploration, BC communities have so far successfully resisted commercial coalbed methane production. Coalbed methane has never been developed in a wild salmon watershed.

Visit the Dogwood Initiativeand sacredheadwaters.com for news and more information. Also, you can watch the video British Columbia: Nigeria North?