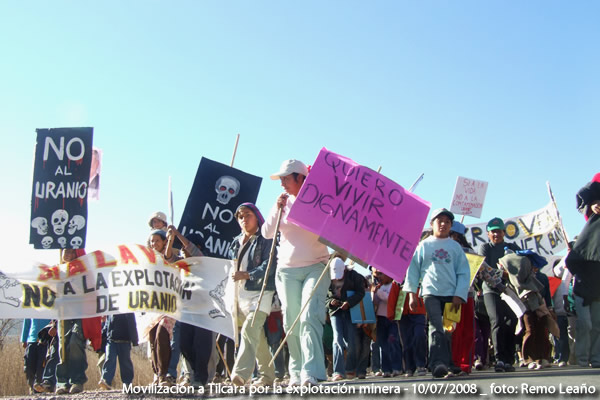 The Indigenous Municipality of Tilcara, in northern Argentina’s Quebrada de Humahuaca district, has ratified legislation that prohibits open-pit metal mining, as well as the storage, use, sale, production, extraction and transportation of dangerous substances used in the mining process.

Tilcara announced its decision on July 8, in the final days of a popular assembly that convened in response to Argentina’s expanding uranium industry.

“July 10 marked the end of [the] popular assembly,” notes a recent report by El Libertario, “gathering autonomously organized neighbors, indigenous communities, social and environmental organizations, business groups, the Mayor, councilpersons of Tilcara, the president of the Ecology Commission of the legislature, as well as the Justice of Mining, the provincial Mining director and the secretary of Culture and Tourism of the province. In that meeting, the act was created that decided the total suspension of mining permits which had been initiated by the company Uranios del Sur S.A.”

Uranios, a subsidiary of the Switzerland company Uranio AG, that’s heavily invested in by Canada’s Rome Resources Ltd., is pursuing uranium mining operations in Juella and Yacoraite, as well as in Tilcara, which is itself a part of the UNESCO Cultural Heritage Area of the Quebrada de Humahuaca.

“In the assembly,” El Libertario continues, “representatives from the Association of Campesino Workers of Juella, the Aboriginal Community of Unity of Volcán de Yacoraite, El Angosto and Yacoraite Sur spoke. The community of Volcán de Yacoriate is located within the territory affected by the prospecting and exploration works. In this zone the remains of the ancestors of the people of this region are buried. The people are demanding not only to be allowed to continue living from their agricultural activities, but also respect for their ancestors and the Pachamama [Mother Earth]. At the assembly a member of the Juella community spoke for the 108 families who live in the region. The agricultural subsistence economy includes production of corn, potatoes, quinoa, vegetables and fruits such as peach, pear and apple. In fact, Juella is the Peach Capital – a site highly recognized for the quality of its natural goods, produced without chemicals and preservatives, with an added value highly recognized around the world.”

After the assembly was completed, two thousand people demonstrated to reaffirm their opposition to uranium mining.

A representative of the autonomously organized neighbors of Tilcara, also read a document signed by Argentinian activist Luis Manuel Claps, which said, “Uranios del Sur was created by [Uranio AG] in order to enter into the uranium mining market” and that it currently holds mining concessions in La Rioja and San Luis. “The company Uranios del Sur SA is currently in a significant process of expansion in Argentina, and its objective appears to be to accumulate a large amount of mining concessions for uranium in as short a period possible.”

The document further points out the irony that British Columbia has a moratorium on uranium exploration and development, “where Rome Resources has its headquarters. The prohibition was put into place on April 24 of this year. That is to say, what Rome Resources cannot do in their country of origin, their subsidiary Uranio AG and Uranios del Sur, will attempt to do in San Luis, La Rioja, and most recently, in the Quebrada de Humahuaca.”

For more news and background, visit the Spanish website, NO a la CONTAMINACIÓN en la Quebrada de Humahuaca; or send an email to noalasminas_(at)_gmail.com