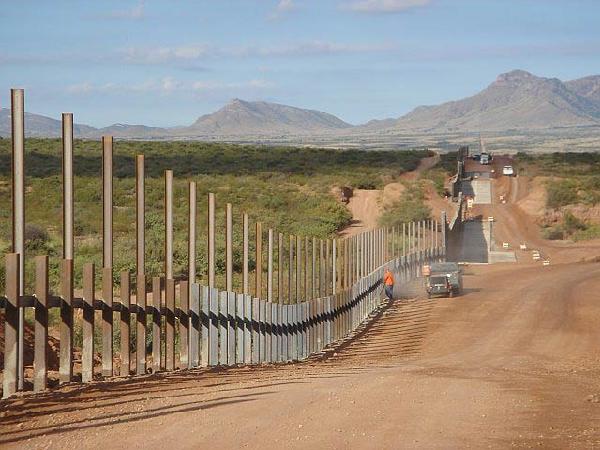 On Thursday, July 10, the O’odham Solidarity Project issued the following call to mobilize against the proposed U.S.-Mexico border wall, which will cut through the heart of the Tohono O’odham’s traditional territory (among others‘).

With the April 1st announcement by the Department of Homeland Security to suspend thirty six federal laws (list of laws found here) to finish the border wall by the end of 2008, the border threatens to destroy the O’odham way of life, their traditions, religious practices, sacred sites, and pilgrimage routes, notes the Washington times, USA Today. There are a host of environmental concerns aswell.

The Traditional Tohono O’odham Indigenous People Demand a Halt to the Construction of the US-Mexico Border Wall and the Destruction of Indigenous Nations.

The following press release was issued by the O’odham Solidarity Project:

The Tohono O’odham Nation has the second largest reservation recognized by the United States, with territory and members on both sides of the US-Mexico political boundary in the states of Arizona, US and Sonora, Mexico. As original people of the territory, the Tohono O’odham have lived on and cared for that land long before such a boundary even existed; before there was a US or a Mexico. Now, however, the construction of the border wall along the entire US – Mexican border is splitting border communities and Indigenous nations alike, including the Tohono O’odham.

The construction of this wall will destroy the Tohono O’odham way of life (their traditions and religious practices), not to mention the many rights sworn to the O’odham people that are being violated. Tohono O’odham elders and traditionalists maintain their legacy through oral history, conducting natural ceremonies that include offerings to the land and sea. They also use manyplants and environmental resources of the region as a source of food and medicine. But, many of these sacred ceremonies take place in Mexico.

“This Wall and the construction of this Wall has destroyed our communities, our burial sites, and ancient O’odham routes throughout our lands. The entire International border has divided and displaced our people,” says Ofelia Rivas, a representative of the traditional Tohono O’odham in Washington D.C. “The Wall is also severely affecting the animals. We now see mountain lions going into areas where people live because of the Wall.”

The right of the O’odham to travel freely and safely via these traditional routes in their territory has previously been guaranteed under United States, Mexican, and International Law. The US government’s American Indian Religious Freedom Act of 1978 acknowledges rights for the O’odham people that the construction of the US-Mexico Border Wall directly violates. By restricting the mobility of the O’odham people, the Wall prevents the free practice of their religion and their cultural traditions. Further, rights granted by the United Nations universalDeclaration of Human Rights, the Declaration of Human Rights for Indigenous Peoples, and the American Declaration of the Rights and Duties of Man are also being ignored due to a waiver issued by the US Department of Homeland Security. Under this document, the President claims the power to waive any and all environmental and Federal Indian laws in order to build the Wall in the name of national security.

The US-Mexican border policies and the Wall have also increased the military presence within the O’odham lands, further affecting their lives and communities.

“This Wall has militarized our entire lands,” states Ofelia Rivas, “We, as original people, are now required to answer to United States armed forces as to our nationality on our own lands.” Ofelia Rivas, herself, was once asked, at gunpoint, to produce identification to establish her right to be on lands that she was born on and her ancestors lived on since before Columbus.

Ironically, the increase in militarization of the US-Mexican Border has coincided with the rise of the North American Free Trade Agreement (NAFTA) that went into effect in 1994. Supporters at the time said NAFTA would decrease immigration and bring good paying jobs to Mexico but the exact opposite has happened.

“Many of the people crossing from Mexico into the United States are indigenous people and families,” says Ofelia Rivas. “They tell me that under these free trade agreements they can no longer farm and make a living.”

Under NAFTA it has become easier for commercial goods to cross the border than people, especially the Tohono O’odham. This is illustrated by a striking example told by Mrs. Rivas:”An O’odham elder and her daughter were interrogated and watched by United States Border Patrol guards as they collected traditional O’odham food in the desert.”

Thus, ordinary O’odham people and elders and their allies are issuing a call to action against the construction of the US-Mexico Border Wall. “As original peoples of these lands,” says Ofelia Rivas, “we protest the violation of the thirty seven federal laws by the April 1, 2008 Waiver by Secretary Chertoff.”