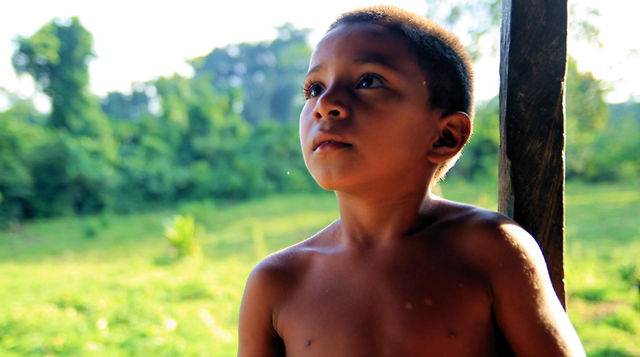 “Paradise in Peril” is a new documentary that follows an expedition organized to document the destruction of the Rio Platano Biosphere Reserve and collect testimony from Indigenous Peoples who rely on the Rio Platano for survival.

The Río Plátano Biosphere Reserve, located in the La Mosquitia region on the Caribbean coast of Honduras, was the very first of more than 700 World Heritage Sites identified by the United Nations Educational, Scientific, and Cultural Organization (UNESCO).

Representing almost 7 percent of the country, the Río Plátano is a part of the largest surviving area of undisturbed tropical rainforest in Honduras. With its wide range of habitats, the reserve is home to a wealth of biological and cultural diversity.

As well, some 5,000 Miskito, Tawahka, Pech, Garífunas and Mestizos live in the valleys and along the Caribbean coast, many of whom continue to live in traditional ways.

There are also some 200 sites of archaeological importance in the protected area, including the site of Ciudad Blanca (White City). Ciudad Blanca, “constitutes one of the most important archaeological sites of Mayan civilization”, says UNESCO. “The reserve also contains the site where Christopher Colombus first landed in the Americas.”

As important as the 5,250 km² biophere reserve and world heritage site is–to the past and the present–the future of the Rio Platano is in danger.

As Paradise in Peril explores, the Río Plátano is the site of an ongoing invasion by “latino settlers” who are entering the Reserve “from all sides, poaching endangered wildlife and fish, slashing and burning ancient forests to sow pastures and forcing the [indigenous peoples] off their ancestral lands.”

Development within and around the reserve is another major concern. As International Rivers notes in their list of Dam-Threatened World Heritage Sites, “On 17 January 2011, the Honduran National Congress approved a decree for the construction of the Patuca II, IIA, and III dams on the Patuca River, which flows into the Río Plátano Biosphere Reserve. The proposed development involves flooding 42 km of intact rain forest, all of which was on the legislative track to either become part of the Patuca National Park or the Tawahka Asangni Biosphere Reserve.”

Indigenous Peoples heavily rely on the Patuca River for water, transportation and subsistence, observes Cultural Survival in their campaign against the hydro dams. “For 3,000 years, Indigenous people have plied their dugout canoes up and down the Patuca River, the central artery of Honduras’ vast Moskitia lowland rainforest. On its rich floodplain they grow cocoa, oranges, rice, beans, cassava, and other crops for subsistence and sale, and its fish provide a vital source of protein.”

As Lorenzo Tinglas, president of the Tawahka people’s governing council, said, “The river is our life…Any threat to the Patuca is a threat to four Indigenous Peoples—the Tawahka, Pech, Miskitu, and Garifuna—and we will fight to the death to protect it.”

According to Edgardo Benitez of the Green Alliance and the Platform in Defence of the Patuca River, the Tawahkas are under a particular amount of pressure . “This community of Tawahkas is at risk of extinction [if] the dam project at the Patuca River proceeds”.

Watch Paradise in Peril on Vimeo: http://vimeo.com/26209577
Show some support for the film on facebook: Friends of the Río Plátano Biosphere Reserve
Send a letter to Honduras: Don’t Dam the Patuca River!