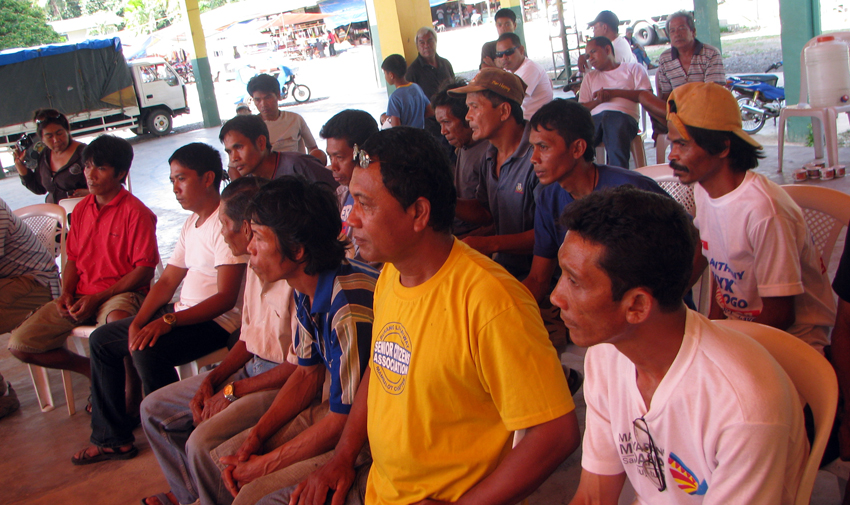 Seven indigenous Pawalan leaders and representatives are on their way to Manila, Philippine’s Capital City, to confront the National Commission On Indigenous Peoples (NCIP) and challenge a fraudulent scheme by the MacroAsia corporation.

According to the ALDAW Indigenous Network, who is facilitating the trip to Manila, MacroAsia is about to use a group of ‘fake’ tribal leaders to prove that it has social consensus for their mining operations in Palawan. ALDAW says the fake leaders were appointed by the NCIP.

The struggle of the indigenous peoples of Palawan against mining corporations is now being impaired by highly manipulative processes being carried out by both NCIP (the National Commission on Indigenous Peoples) and MacroAsia Corporation.

Last week 30 “fake” tribal leaders, so-called Tribal Chieftains, went to Manila (Philippines/ Capital City) in order to show support for MacroAsia Mining Corporation (MAC), despite opposite views from the majority of the Indigenous Peoples of Palawan. These so call Tribal Chieftains have been appointed by NCIP to favour multi-billionaire Lucio Tan’s owned MacroAsia Corporation.

If this process of manipulation is not adequately counteracted, MAC may end up acquiring the required ‘social-consensus documents’ (Certificate of Precondition), which are needed in order to start mining operations in the territory of indigenous communities, some of which are still isolated and have limited contacts with the outside world.

By creating ‘ad-hoc’ “tribal leaders” NCIP and MacroAsia have bluntly disregarded local decision-making processes that are customarily facilitated by elders and so called ‘panglima’ (traditional leaders).

“These fake IP leaders” says Panglima Pedro Sagad “are paid by Macroasia and do not have any right to represent our people, especially with regards to mining companies encroaching in our ancestral territories”. According to Artiso Mandawa, Chaiman of the ALDAW network (Ancestral Land/Domain Watch): “none of these ‘so called’ tribal chieftains inhabit our ancestral land domain. Out of 30 of such representatives, 15 do not even belong to the Palawan ethnic group and eight of them are only half-blood Palawan. Of the remaining seven, two come from other parts of the Island, and five are lowland Palawan having no connections with the upland communities to be directly impacted by MacroAsia activities”.

Authentic representatives of indigenous Palawan communities (panglima), facilitated by the ALDAW network, will soon be travelling to Manila (the Philippine’s Capital City) to bring their voices and grievances to the attention of NCIP and, thus, to counterbalance the ‘fabricated’ testimonies of the ‘fake’ tribal chieftains. The mission, headed by ALDAW chairman Artiso Mandawa will be composed of seven indigenous leaders and representatives from Brooke’s Point Municipality: Pedro Sagad, Wiliton Palete, Prudencio Danadio, Ronald Cumbang, Entecio Gipaya, Titu Cui, Abelio P. Danadio.

Specifically, during the en banc NCIP meeting, the members of the delegations will make an open call to:

1) immediately investigate the mining activities inside the ancestral domain of the Palawan tribe, being carried out without the genuine free prior and informed consent of the tribe as enshrined by the Indigenous Peoples Rights Act (IPRA) or R.A. 8371 and without the mandatory community consultations as required by the Local Government Code of 1991;

2) revise the NCIP guidelines for FPIC, in order to ensure that these will really respond to the meaning of ‘consensus’, as it is perceived by the indigenous communities themselves;

3) carry out serious in-depth investigations to determine whether, and to what extent, the provincial NCIP officers can still perform their duties in a way that reflects the mandate and priorities of NCIP. Ultimately, those officers who have abused their power and conspired with mining companies should be removed immediately from their positions;

4) revoke and nullify all certificates of precondition issued by NCIP to mining companies in Palawan;

5) disregard the Memorandum of Agreement (MOA) signed by mining companies and ‘fake’ tribal leaders who have been appointed by the NCIP rather than by the local indigenous communities;

6) re-due all FPIC processes in conjunction with the operations of MAC and other mining companies in Palawan.

Aside from attending the en banc NCIP meeting, the indigenous leaders – through their national supporters (‘The Alliance against Mining’ – ATM) will deliver a special message to the President of the Philippines to spare Palawan (the Philippine Last Frontier) from mining operations.

The panglima through a selected ritual specialist will also perform a ritual offering at the office of ABS-CBN Foundation in Manila. “The purpose of the ritual” says Pedro Sagad (panglima and ritual specialist) is “to call our ancestors to support us as well as to guide the actions of those government officials responsible for implementing the Indigenous People’s Right Act (IPRA)”. This law, so inefficiently implemented, is – in fact – aiming at protecting indigenous rights and territories nationwide. As part of the ritual there will a symbolic offering addressed to ABS-CBN Foundation (the institution spearheading the 10 Million signatures petition) consisting of non-timber forest products (NTFPs), useful plans, traditional crops and seeds that have been selected by IP of Palawan over thousands of years and in the same locations that are now being threatened by MacroAsia Corporation. Say Artiso Mandawa “in doing so we want to place emphasis on the fact that our indigenous people have been the guardians and stewards of these precious natural and cultivated resources over a long period of time and, without us, Palawan would not be as beautiful and green as it still is today. This is something that environmentalists should always take into account when implementing conservation projects”.

The indigenous delegation will also meet with Cong. Baguilat (Congress Chair for Indigenous Cultural communities) and Cong. Bag-ao of AKBAYAB- Caucus Group on Indigenous People (CGIP). The purpose of these meetings is to brief both congressmen on the proposed congressional inquiry regarding the issuance of Environmental Compliance Certificate (ECC) and Certificates of Precondition (CP) to MacroAsia. The Office of the Presidential Advisor on Peace Process (OPPAP) will also be visited by the delegations to discuss the increasing militarization now taking place within the ancestral domain of the indigenous Palawan communities of Brooke’s Point Municipality.

Undoubtedly, unless MacroAsia Corporation mining will be stopped, the environment on which indigenous Palawan depends for their physical subsistence and cultural sustenance will be irremediably altered. Also indigenous peoples’ sacred and worship sites are found within the mining tenements of MacroAsia. As of now, MAC exploration activities have also taken place in areas that, according to indigenous elders, are considered as lyen or lylien (sacred forests) inhabited by powerful super-human beings (Taw Kawasa), as well as in areas that are indispensable to subsistence and well-being of isolated communities. ALDAW has already obtained geotagged evidence on this; as well as film footage.

According to official information, between June 15 and 17, the NCIP will convene an en banc meeting to decide on the issuance or non-issuance of the Certificate of Precondition to MacroAsia Corporation. The eventual endorsement of this important document will allow MacroAsia to proceed towards the next step: getting the (Strategic Environmental Plan) SEP clearance from the Palawan Council for Sustainable Development (PCSD). After that, MAC will have acquired the most important documents to start the plundering of precious forests and indigenous people ancestral domains. All measures should be taken to reverse this trend.

Address your concerns to the NCIP, requesting the no-issuance of the Certificate or Preconditions to MacroAsia Corporation:

Also Sign the no-2-mining-in-palawan petition launched by the Save Palawan Movement http://no2mininginpalawan.com/

And the ALDAW Petition to stop the encroachment of mining corporations and oil palm plantations in the ancestral land of indigenous Palawan! http://petitiononline.com/PA2010/petition.html