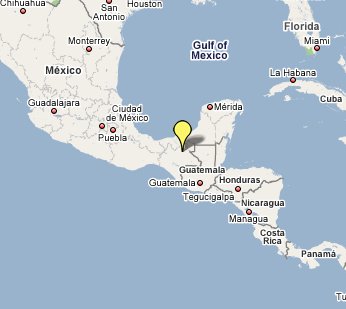 Other Campaign Responding to Aggressions Against Community

In response to the increased aggressions of Institutional Revolutionary Party (PRI)-affiliated armed groups against the community of Bolom Ajaw in the region of the Agua Azul river, civil organizations and members of the Other Campaign in Chiapas have set up an observation camp in the Zapatista community.

The armed group wants to evict/displace the community from their land, because they say it used to be a privately owned tourist and resort area. In 1994 the Zapatista reclaimed the land…

To assist the community, “the Center for Political Analysis and Social and Economic Investigations (CAPISE) has [also] called on international civil society and organizations to address their ministries or Departments of tourism and the travel agencies in their countries, to “inform them about the incidents at the Agua Azul waterfall and to carry out a campaign with the demand: No visits to the Agua Azul Cascades, until the aggressions and eviction threats against the families of the community Bolom Ajaw have stopped!”

The call proposes that organizations in Mexico and other countries that heed the call send protest letters to President Felipe Calderón, tourism minister Rodolfo Elizondo Torres and the government secretary Francisco Ramírez Acuña.

CAPISE also calls for public demonstrations “against the aggressions to which the inhabitants of Bolom Ajaw and the Zapatista communities are subjected, to visit Mexican travel agencies and inform them about the incidents in Agua Azul,” and to invite them to not send tourists to the waterfall.

“In view of the serious situation to which the Zapatista families are subjected, in the context of total impunity with which the OPDDIC members of the Ejido Agua Azul are operating,” a special “Land and Territory Observation Brigade” (BEOTT in its Spanish initials) departed to Bolom Ajaw on November 28, to “offer assistance to the women, men, children and the elderly of the community Bolom Ajaw.”

On the same day Chiapas governor Juan Sabines Guerrero requested the Office of the General Attorney of the Republic (PGR) to investigate the denunciations against the OPDDIC in Bolom Ajaw and the Ejido Agua Azul. Nevertheless, on November 29 in the afternoon, an armed group of OPDDIC members fired repeatedly on the Zapatista community, from a distance of 200 and 150 meters. The shots were fired mainly with large caliber weapons, as reported by the Good Government Junta of Morelia and later confirmed by the BEOTT…