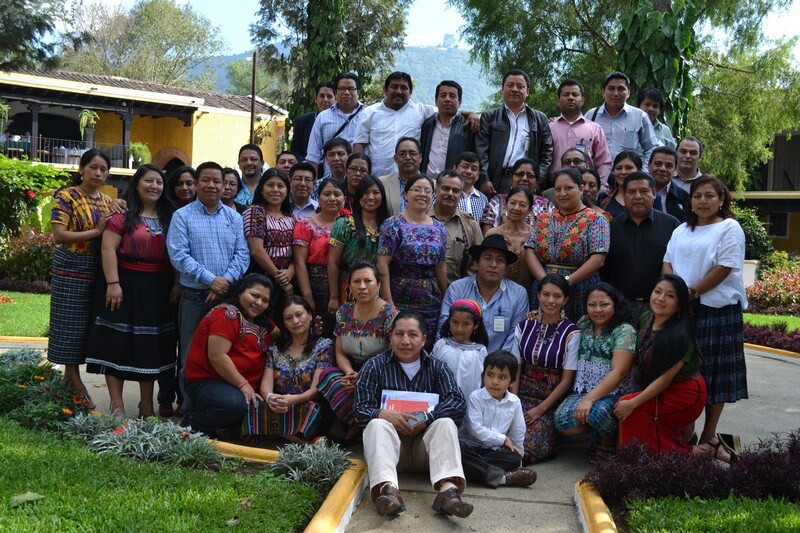 Nim Ajpu: Indigenous lawyers who are changing the face of Guatemala

Maya layers pose for a picture during their annual Congress. Photo: José Agry Sian
Support our journalism. Become a Patron!

Nim Ajpu is a name that’s known to all Quiché Maya Peoples. A nahual or spirit that accompanies and protects us in the Maya cosmovision, Nim Ajpu was the twin brother of Ixb’alamkej who together defeated the death gods and who went on numerous adventures that forever changed the face of existence. The story of these hero twins is told at length in the Popol Wuj, the famous text that accounts for the cosmologies, origins, and spiritual histories of the Maya Quiché.

Nim Ajpu is also the name of the Association of Maya Lawyers and Notaries in Guatemala. The association supports the individual and collective rights of Indigenous Peoples through strategic litigation. Because the Maya represent over 60 percent of the population—which is largely discriminated against by state institutions—Nim Ajpu is unable to defend all Maya peoples in court, so it chooses instead to take strategic cases that can help set legal precedents. Their goal is to advance Indigenous rights in the legal and political system, eventually taking cases to the Inter-American system of human rights when domestic resolutions reiterate racist patterns.

In 2004, a group of about 20 Maya lawyers gathered to find ways to better defend Indigenous communities through their legal practice. They were aware of what it entails to advocate from Indigenous experiences in the state judicial system. Stirred up by the enthusiasm of Amilcar Pop—the first Maya politician in Guatemala’s Congress—they envisioned a legal organization related to Maya communities and founded Nim Ajpu.

The organization expanded in membership and strategies. It now counts over one hundred members supported by councils and board members. Members include a vast array of law professionals, from lawyers to judges, public defenders, and notaries; most lawyers have only support cases of the association occasionally.

The core engine of Nim Ajpu are five full time lawyers who lead the strategic litigation – Juan Castro, Cristian Otzin, Edgar de Leon, Mellina Salvador, and Claudia Chopen. They rely on the support of a small administrative team of eight-people in an office in the capital. There are more affiliated lawyers from various nations across Guatemala who contribute on a voluntary basis, such as Rosa Ixcol (Maya K’iche’) and Ixquik Poz (Maya Licúe). 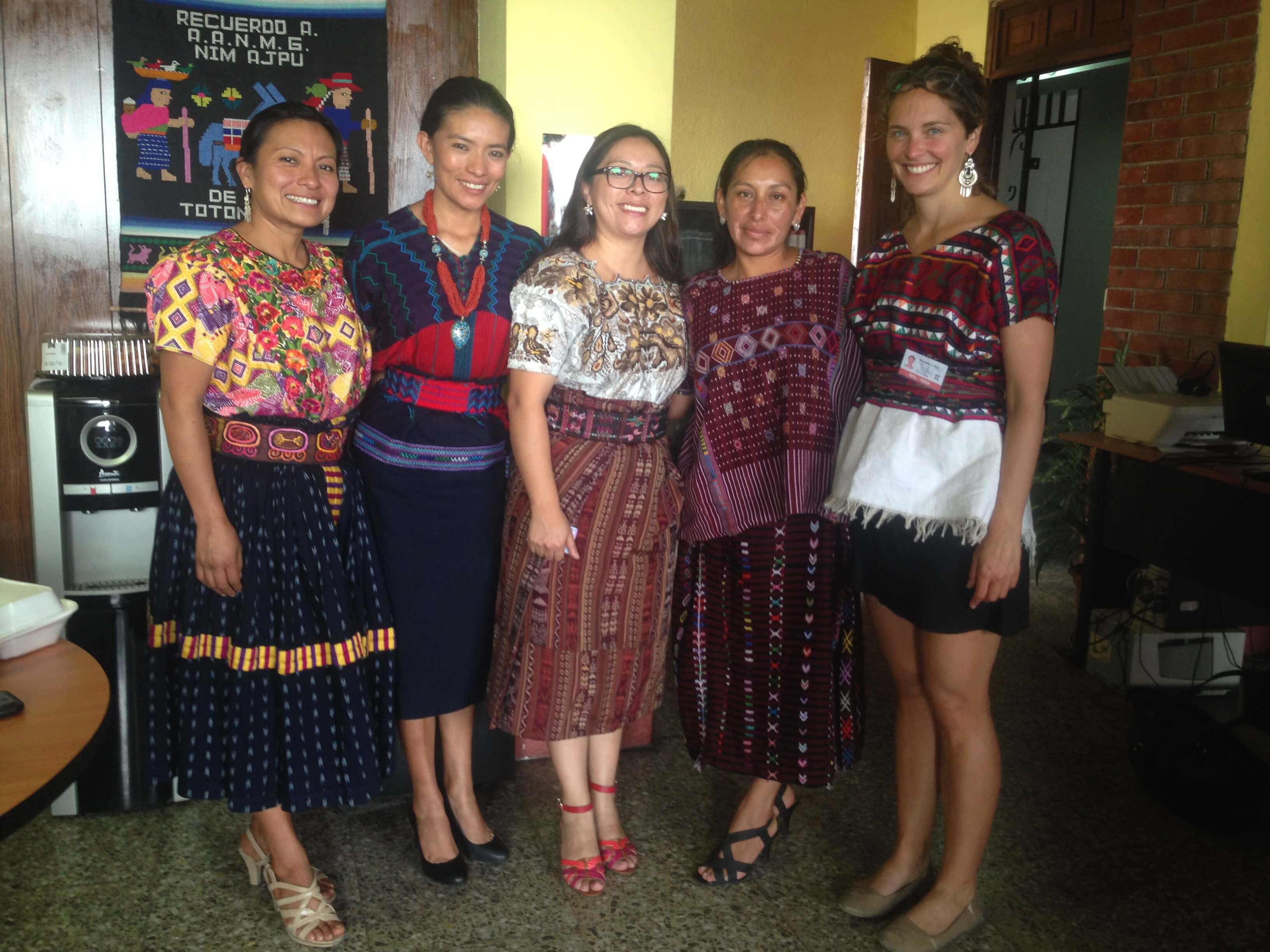 In addition to litigation, Nim Ajpu works on political incidence, research, and training. The Maya lawyers also challenge new laws presented in Congress and discuss policy in media venues. They play a crucial role in shaping ideas, whether it is by contesting government attempts to regulate prior consultation (2012) or to pass laws privatizing corn seeds (2015). They train judges in legal pluralism, familiarizing them with Indigenous concepts of law and justice. They teach university students, including at the Maya University. And every December, Nim Ajpu organizes a two-day congress that brings together about 70 Indigenous lawyers to brainstorm current challenges.

Most cases tackle self-determination, whether it is to recover lands stolen by the state or to establish the authority of indigenous systems of justice. Dozens of cases have already set important precedents for Indigenous Peoples in Guatemala.

For instance, a major win in 2004 established the autonomy of Indigenous Justice in the Supreme Court. Maya lawyers defended Juan Zapeta, a Maya authority accused of administering justice in Santa Cruz de Quiché. It was one of the first cases in which Guatemala courts recognized the rights of Maya communities to exercise their own forms of justice.

In 2010, Maya lawyers recovered communal land illegitimately appropriated by the state. The state had granted Indigenous land to telephone companies during the armed conflict (1973) in an act that ignored the prior existence of an Indigenous municipality. The recovery of land in the case of Chichicastenango set an important precedent in recognizing Indigenous forms of government and accreditation mechanisms.

That same year, Maya lawyers set a precedent for rights to prior consultation. When the mayor of San Juan de Sacatepéquez canceled a consultation on the construction of a cement company, protests erupted and a militarization of the area followed. Maya lawyers took the case pushing courts to make a first sentence on Indigenous rights to prior, free, and informed consultation and to declare the ILO Convention 169 for part of the constitutional corpus.

Most recently, Maya lawyers defended ancestral authorities criminalized for defending rivers against extractive industries. Private companies, many of them hydroelectric projects, corrupt judges and accuse community leaders of fabricated crimes to keep them behind bars without due process. The use of legal warfare kept Maya authorities in preventive prison for months or years, and these highly political cases were taken by Maya lawyers.

In 2015, a team of Maya lawyers freed ancestral authorities accused of a crime they did not commit in Santa Cruz Barrias, near the border with Chiapas. In July 2016, they freed 7 political prisoners accused of fabricated crimes, including Rigoberto Juárez and Domingo Baltazar. This month, Maya lawyers took the defense of Oscar Sanchez, the 11th authority of a Maya Mam community sentenced without evidence to the preventive jail of Quetzaltenango. 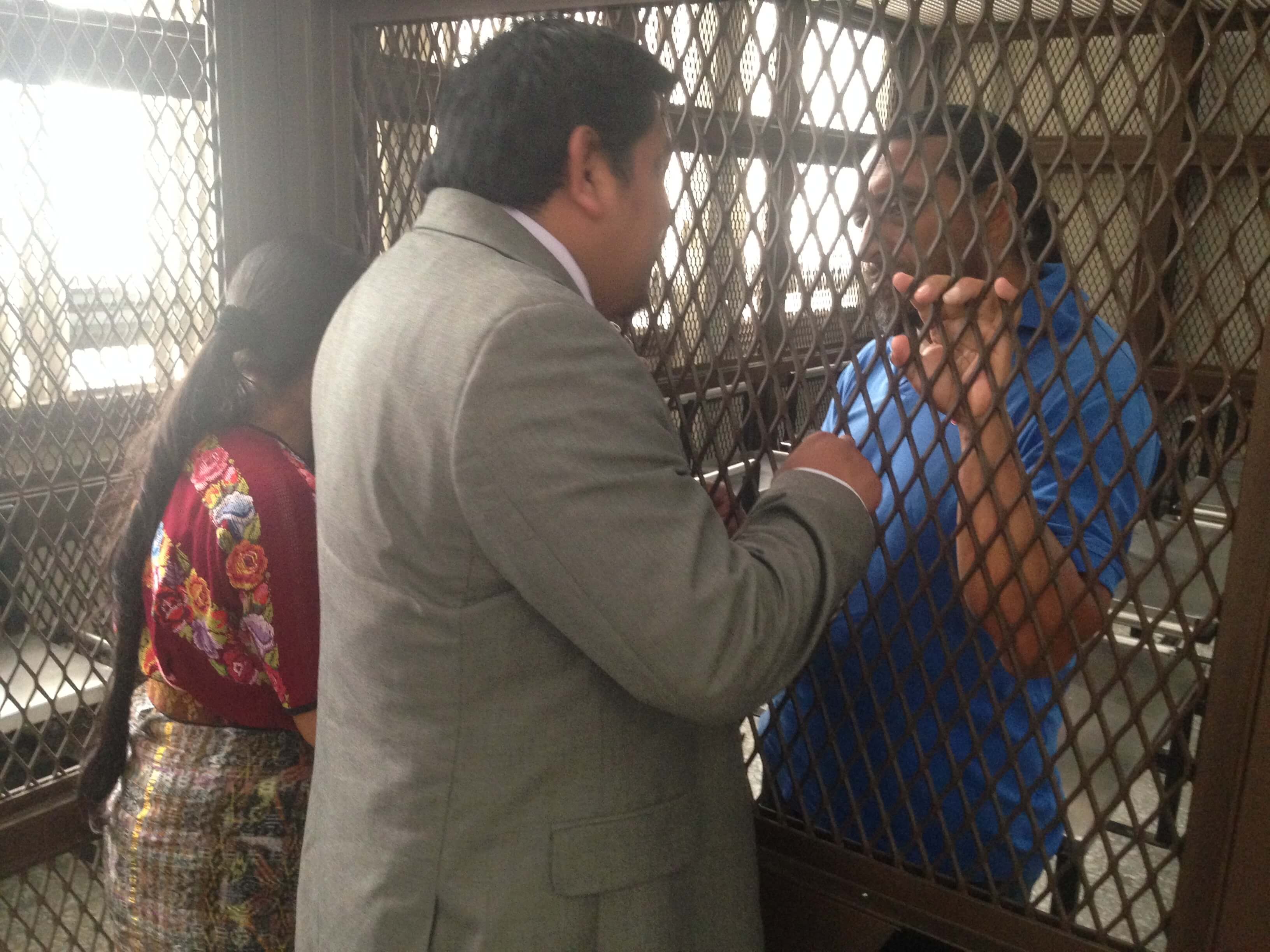 Juan Castro talks to Rigoberto Juarez before the start of the trial. Photo: José Agry Sian

In addition, two emblematic cases already set precedents this year. One case secured bilingual education as courts recognized the rights of Maya communities to receive education in their own languages. Another case was a hard battle over a case of rape that had been judged and sentenced by Indigenous justice. Feminists joined right-wing sectors in contesting the capacity of Maya authorities. Ultimately the Constitutional Court, which stands above the Supreme Court, recognized the authority of Indigenous justice.

Among many other cases, Nim Ajpu is presently involved in the ongoing effort to re-write Guatemala’s civil war constitution to add concepts of self-determination and explicit language defining Guatemala a plurinational state.

Maya lawyers have been recognized or hated depending on context and perspective. Private companies and even the president decried lawyers like Amilcar Pop as terrorists who arm Maya communities, especially when they defend indigenous rights to consultation against extractive industries. Overall, however, Maya lawyers have become a referent in Guatemala. Communities consider them their lawyers. Nim Ajpu is now the entity that positions collective rights in Guatemala; both government and society expect its opinion on new legislation.

One of the greatest strengths of Nim Ajpu lies in its functioning. First, there are no fees. All legal support is provided free of charge, ad honorem. Communities do not pay for the legal services; though they may offer food to lawyers on the ground. Lawyers are not paid by case or by hours; they receive some form of recognition for their work depending on donations from international organizations, like the small funding provided by the Association of Lawyers of Norway.

Nim Ajpu relates to broad Maya networks like the Great Council of Indigenous authorities of Iximulew, lending support to their political consolidation. Some are long recognized Indigenous municipalities that have existed in official registries since the colonial era. Chichicastenango (consisting of 83 Indigenous communities each with its autonomous political authorities) already defended its autonomy from the Spanish Crown in 1635. The municipality of Sololá (71 communities) had Indigenous mayors registered in colonial records since 1557. The lasting authority of the 48 Cantones (48 communities) is still recognized today in presidential speeches.

Yet other organizations are less known, and their invisibility makes them vulnerable to state entities eager to appropriate their lands. In such cases, Maya lawyers play key roles in consolidating Indigenous authority, first among networks of Maya authorities then through collective land titles. Maya communities are not civil associations authorized by state organs: they are accredited under Maya ancestral mechanisms without having to ask permission to state bodies.

Third, Maya lawyers try to break away from the logic of the western state system. They try to decolonize themselves escaping the logics of state law, paying attention to the struggles of Maya communities, listening rather than telling. Their litigation is a strategic struggle against a legal system that posits itself as sovereign authority. They do not defend “clients” but stand by brothers and sisters. Many Indigenous lawyers around the world seek to decolonize themselves and the law; the singularity of Nim Ajpu is to have taken this effort to an institutional level.

The essence of Nim Ajpu is best summarized by lawyer Juan Castro: “Our maya identity is a political one, we defend our territories, we speak Indigenous languages and understand Maya cosmovision.” A Maya lawyer is a political identity, one that challenges conventional legalities and quietly redefines state authority.