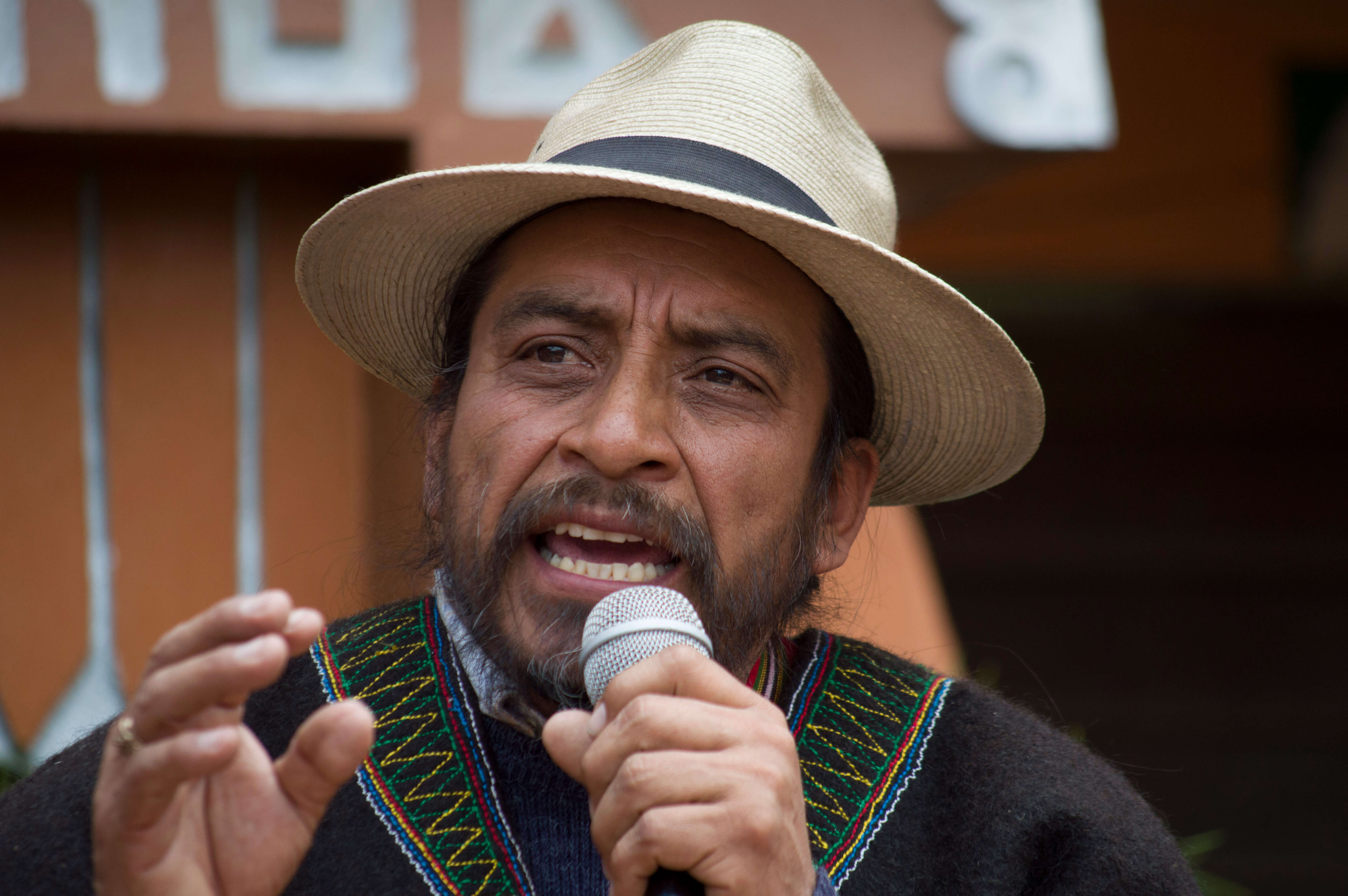 ‘Lawfare’ against Maya authorities in Guatemala

Rigoberto Juárez (pictured here) and Domingo Baltazar are political prisoners of a legal system that is not only racist but also accomplice to the private land-grabbing of Maya lands. Photo by Nelton Rivera, Prensa Comunitaria
Support our journalism. Become a Patron!

Rigoberto Juárez did not attend the meeting of the United Nations Permanent Forum on Indigenous Issues (UNPFII) in Guatemala last April 12, 2016. Nor did Domingo Baltazar.

Hundreds of Maya women and men delivered their concerns in their native K’iche language to the UNPFII delegates this month. Among them, Maya Authorities carried their community scepters (‘baston de mando’), and spoke in the name of their millennia-old communities. Juárez and Baltazar were not able to join them with their scepters nor speak in the name of Maya people from Q’anjob’al territory, in Huehuetenango. They were in jail.

In fact, that very morning they had a court hearing, which got suspended like so many court hearings before. The two Maya authorities were jailed over a year ago. Since then, they have been kept in an overcrowded preventive prison without evidence through negligent judicial procedures. Many others have been forced to endure the same fate.

Prison without due process is a price Indigenous Peoples pay for resisting extractive industries and hydroelectric plants.

The emblematic case of Juárez and Baltazar opens the door to many other Maya authorities who have been taken as political prisoners by the courts of Guatemala. While the 1996 Peace Accords brought an end to over 30 years of civil war, it did not bring peace to Maya populations. Because private companies and the government now work so closely together to remove Maya authorities that resist land-grabbing for development projects, those who endured years of military warfare now face legal warfare and criminalization.

The ropes of legal warfare

Rigoberto Juárez and Domingo Baltazar have fiercely resisted hydro dam projects in the northern territory. Their efforts were so successful that the private companies behind the dams decided to fabricate charges against them. In early 2015 Juárez and Baltazar were arrested while attending a conference in Guatemala City and sent to a preventive detention center.

Juárez and Baltazar have been accused of nearly a dozen charges, none of which can be proven. Most importantly, they were accused of keeping local state judges ‘hostage’ on January 19 2015. This accusation lead to their immediate, preventive detention.

The problem is the accusation isn’t real. On the day in question, the judges were surrounded by a crowd that was demanding justice in a case involving hydro companies. Juarez came to mediate the situation and Baltazar was not even present at the scene.

The accusation was ultimately dropped for lack of evidence; however, the courts have repeatedly refused to free both men as required by law. And so, Juárez and Baltazar continue to sit in preventive detention.

Many other Maya authorities share Juárez and Baltazar’s experience down to the letter.

They are charged with crimes like kidnapping and feminicide to justify their immediate arrest and to deny them bail. Judicial negligence then dilutes the legal process so that the accused spend months – or years – in jail before having the chance to prove their innocence. Judicial dilatation, the tactic of suspending hearings to extend the timeframe of a trial, serves well to keep leaders jailed, deter other acts of resistance, and deprive communities of their organizational structures.

Such tactics have set the tone of the case of Juárez and Baltazar from the start. Their initial court hearing was suspended five times; with about ten hearings suspended in total over the last year. This means that their trial keeps being delayed, even though the courts have no proof to verify any of the accusations.

It happened again that April morning. The entire hearing lasted exactly 12 minutes. Juárez and Baltazar and their lawyers awaited for the accusing company to show up in the courtroom and expose the evidence of the charges. But they never came. Instead, the judge announced that the hearing was suspended. The defense lawyers, Juan Castro and Edgar de Léon from the Association of Maya Lawyers, invoked constitutional articles and international human rights to demand that the hearing take place securing due process, but judge Claudette Domínguez postponed it anyways, promising a hearing for April 26.

Handcuffed, the two political prisoners were taken back to jail without being heard. 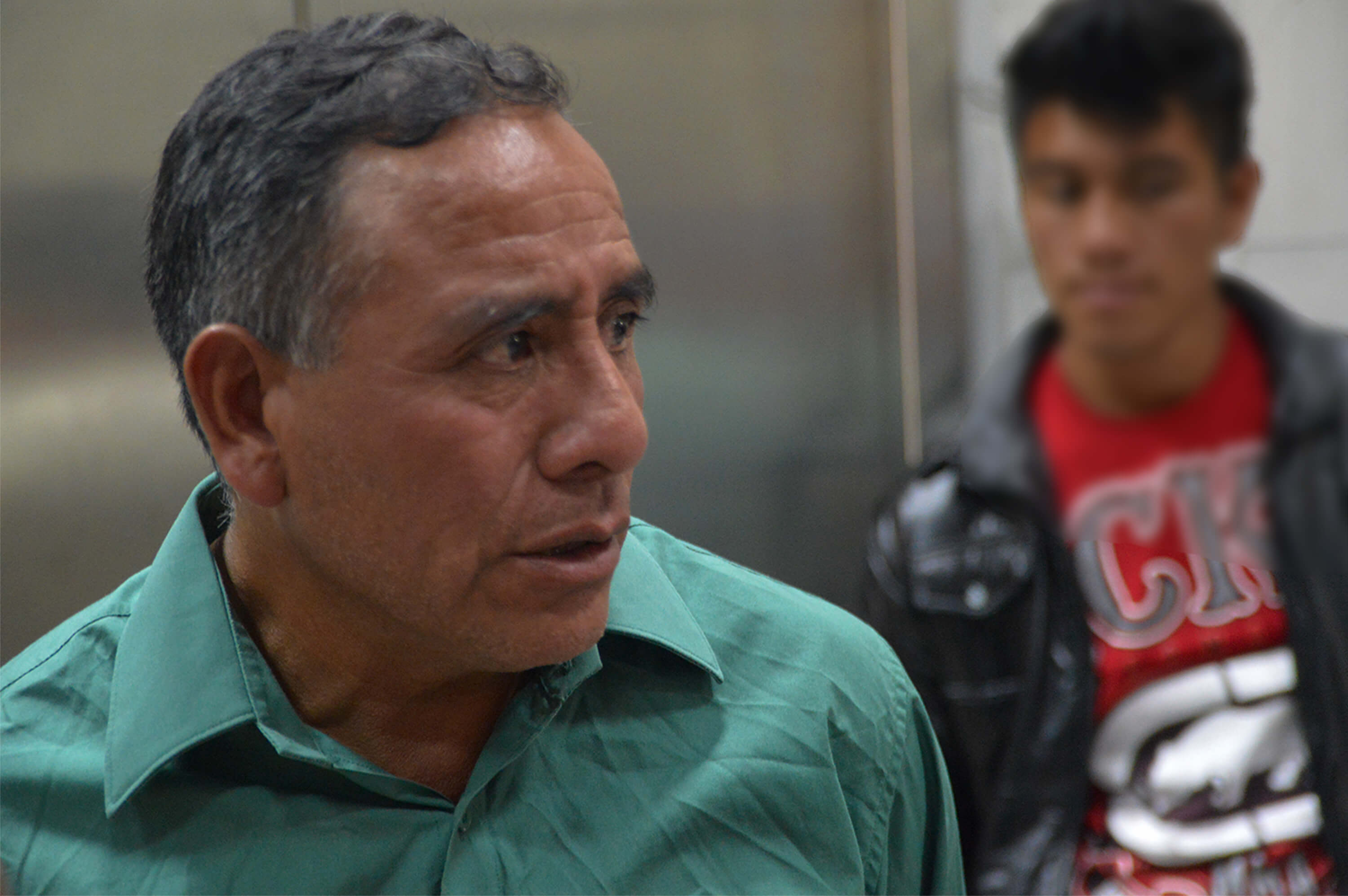 Guatemala’s Preventive Detention Center Zone 18 is a nine-hour drive from their village. It is the most populated jail in the country, designed for 900 people but holding nearly 5000 inmates, and it is ruled by narco groups, pandillas, and the military.

The invisible criminalization of Maya resistance

The case of Juárez and Baltazar in Q’anjob’al territory is particularly important because it represents one of the strongest sites of resistance against extractivism in Guatemala, and the government is determined to silence them.

Q’anjob’al territory, north of Huehuetenango, is an epicenter of extractivism. The region is increasingly coveted for its strong rivers. The Ministry of Energy and Mining has already granted licenses for the construction of two private hydro dams in the area.  Hidro Santa Cruz, related to the Spanish company Hidralia Energía Ecoener, develops the projects of Cambalam I and II in the river of Santa Cruz. Promoción y Desarrollos Hidrícos, S.A. (PDHSA) contracted the services of Hidralia Energía in Guatemala to build the Pojom I and II hydro dams in San Mateo Ixtatán. Santa Eulalia, the regional administrative center, has served as the stage for all tensions with these companies.

The leadership of Juárez and Baltazar are but the tip of the iceberg. Throughout the region many other leaders are criminalized, including seven additional political prisoners in the Santa Eulalia area. Hundreds more Indigenous authorities are perceived as dangerous because they structure community resistance.

The government of Guatemala systematically criminalizes these and other Maya authorities for demanding prior consultation and defending their land from resource and development projects. In fact, it is extremely dangerous to be elected a Maya authority these days in Guatemala. Most of them have been intimidated, jailed, and even killed, victims of the alliance between private companies and the government to grab Indigenous lands.

As a result, even resilient communities have started to give in to destructive mega-projects. The people of San Juan de Sacatepéquez, for instance, have waged seven years of resistance against the construction of a cement plant on their land. The cement plant would use up all the available water, dry up land and destroy the local flower business, and therefore generate a wave of unemployment that would force a migration to nearby cities. They have faced a brutal campaign of criminalization since 2008, initially under the watch of President Otto Pérez. Local authorities were arrested, with one receiving a sentence of 150 years in prison. Their village was militarized. Sexual violence was used to repress lingering resistance. Even their lawyers were harassed and criminalized.

Part of the vulnerability of Maya resistance is the lack media coverage. Earlier this year, for instance, two women were jailed in Xela for protesting the installation of cell phone towers. They expressed their discontent peacefully, with card board signs demanding prior consultation. They were arrested without charges and jailed. A sole local newspaper published a story about the illegal detention, which went unnoticed at the national level.

Maya struggles are largely treated as irrelevant by the media which helps to ensure that their criminalization remains invisible in national and global politics. This racist invisibility has human and conceptual consequences. People are jailed in total impunity and those who care never know. Only the strongest leaders secure media coverage and legal support.

The state as land-grabber

The lawyers defending Juárez and Baltazar are all members of the Association of Maya Lawyers. For them, these cases speak volumes about the role of the state in Guatemala.

Like all Maya, they are the inheritors of a 36 year civil war that resulted in the deaths of nearly 200,000 people, most of them of Maya descent. Lawyer Edgar de Leon links the criminalization of today with the military violence of the 1980s. He told IC that the old military tactic of ‘decapitation’ is still being used by the government. The only difference now is that they’re cutting down community organizing instead of community members.

Baltazar similarly compares the current situation of Maya Peoples to the civil war, commenting, “We are jailed simply for asking for rights. People are being killed.” Juárez also compares the struggles of today with those of the 80s. In fact, he says the military has simply become more experienced and developed more effective strategies of repression. “They can hit harder now that they know what kills us.”

To make things worse, Maya lands are shrinking. “Maya peoples had more territories back in the 1980s, now our lands have been decimated,” says Juárez.

But the judicial system, like the military is merely a tool of capital accumulation. The essence of the problem lies in the underlying model of the Guatemala state that uses any means it can to appropriate the Maya’s ancestral territory.

More often than not, when the state does appear, it’s to grab lands, exploit resources, to militarize and make arrests.

In that sense, Guatemala is a shining example of the modern state. Far from being a righteous protector of democratic values, it stands as a tool to invade, steal, and appropriate native land. Juárez is right when he says that the problem affecting Maya populations is a global one: “the ambition of capitalist accumulation is destroying not only individual lives but our entire world.”

This formula of the modern state as land-grabber is the reason why lawyer Benito Morales says that the trials of Juarez and Baltazar and other Maya leaders aren’t even really about the law, nor can they be solved judicially. They are aspects of a very old dispute that centers on territory and power.

Lawyer Juan Castro puts it clearly: “the state corresponds to a specific system of economic and land exploitation; it establishes laws and manipulates the legal system to defend that economic system; and it uses the judicial system to criminalize those who question it.”

Ancestral Maya authorities are the ones who have historically questioned it.

The hearing promised for April 26 was suspended again, perpetuating the violent impunity of the land-grab. Juárez and Baltazar remain in jail without a semblant of due process.

From the overcrowded prison in Guatemala City, Rigoberto Juárez called for solidarity in action stressing that if there are political prisoners, there has to be political action.  “We all have the obligation to defend life, everywhere.”