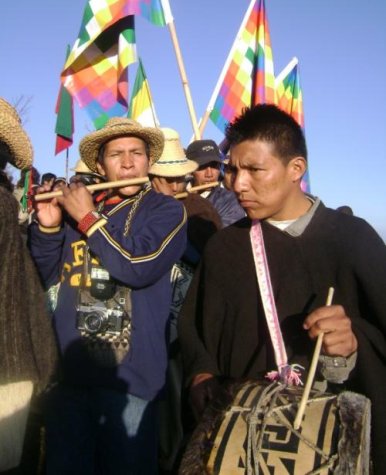 More than 7,000 indigenous activists and representatives of other popular and social sectors throughout Cauca and the southwestern region of Colombia have mobilized to commemorate 516 years of resistance, and to consolidate the “Commotion of the Peoples” against the current regime of greed and terror in the South American State.

The mobilization began on October 12, with a plan to hold an Indigenous and Popular Congress and restate the popular mandate of September 2004. “We do not accept Free Trade Agreements like the ones negotiated behind closed doors with the United States, Canada, the European Union, the European Association of Free Trade, or any other deal that looks to displace us of our rights, our culture, our knowledge and our territory.” states an October 10 Press Release from the Association of Indigenous Councils of Northern Cauca (ACIN).

“We want treaties between peoples, for the people, not treaties of the patrons against the people and against Mother Earth. We denounce, resist and demand an end to the Constitutional Counter-reforms and legislation of displacement that has been implemented under the current government, measures that surrender our rights to private interests, and that submit us to silence and forced labor, to exclusion and ultimately death. There are many laws and statues implemented or in the process of being implemented, including the Rural Statute, the Mining Code, the Water Law and the Forestry Law. No more terror through Plan Colombia, the so-called “Democratic Security,” or the Para-Politics of Alvaro Uribe’s government,” the statement continues.

Uniting in La Maria, Cacua, the group has so far held “inaugural acts of protocol to begin the Assembly, listening to the words of the indigenous authorities,” states and October 13 release from ACIN. “Today, on the second day of the Minga, the work agenda includes meetings and workshops with leaders and representatives of other sectors of the popular social movement, including peasant farmers, the sugar cane workers – now on strike for almost one-month, the Afro-Colombian movement, and trade unionists.”

Other actions and rituals are being carried out throughout the rest of the country by other sectors of the indigenous and popular movement in Colombia.

During the first day of mobilization, there were two assassinations carried out against indigenous civilians in Cacua.

The first attack occurred at a place known as “El Pajarito”, near the Huellas-Caloto resguardo or indigenous reserve. Nicolás Valencia Lemus, 39, was driving with his wife and son to the indigenous reserve of Toribio, when, “according to eyewitnesses, he was ordered to stop and get out of his car by two hooded gunmen who identified themselves as members of the ‘Aguilas Negras,’ or Black Eagles, a new generation of paramilitaries, which has emerged in the last year since the ‘demobilization’ of the AUC,” states the ACIN. The assassins proceeded to shoot and kill him in front of his family.

The body of another indigenous civilian, Celestino Rivera, 25, has also just been found with two bullet wounds to the head. A member of the resguardo of Jambaló and resident of the village of Zumbico, Celestino was found on the road between Toribío and Jambaló.

There have been numerous other assassinations in recent weeks. Since August 11, 2008, 5 indigenous people in Nariño, 3 in Riosucio Caldas, and now 3 in Cauca have been assassinated. An attempt was also made against the Governor of the indigenous cabildo of Canoas, who refused to give armed gunmen details of his whereabouts two weeks ago. Along with these murders, an Afro-Colombian leader in Tumaco, two peasant activists in Cauca, and Olga Luz Vergara, a woman’s rights leader from the organization Ruta Pacífica de las Mujeres in Medellín, have been assassinated.