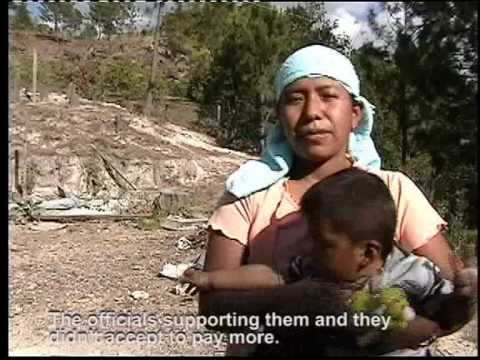 Guatemalan Re-Sisters in San Miguel Ixtahuacan testify about the impact of mining on their crops, water sources and health. They also talk about the company’s broken promises.

In February, 2009, a research team from the Pastoral Commission for Peace and Ecology (COPAE) confirmed that Goldcorp’s Marlin mine in the municipality of San Miguel Ixtahuacan, Guatemala, is poisoning local water supplies.

The report, which has yet to receive any coverage in the press, came as no surprise to the Mayan Mam community of San Jose Ixcaniche and others living downstream from the mine.

Ever since the Marlin mine opened in 2004, the people of San Jose Ixcaniche have suffered from a range of health problems, including skin rashes, hair loss and unexplained open wounds on men, women children. Even infants.

Goldcorp says it’s all the result of “bad hygiene”, a lack of water and fleas. The Canadian company has continued to stand behind the claim, even after COPAE’s research was released.

This is only a small portion of what the People of San Miguel have been forced to endure. Their water sources have been depleted, negatively impacting their crops and cattle, and more than 100 homes have been damaged as a result of digging and blasting at the mine.

There is a host of social problems as well. Bitter divisions have emerged between community members who oppose the mine and those who defend it. Some resisters have been “disappeared” and brutally murdered.

Goldcorp, on the other hand (via their subsidiary, Montana Exploradora) has tried to use the Guatemalan legal system to have them thrown in jail. Most notably, they pressed dozens of legal charges against a goup of local leaders, known as the Goldcorp 7—and a group of eight Mayan Woman, including Gregoria Crisanta Perez and Crisanta Hernandez, both of whom were interviewed for this film. The case of the eight Mayan Woman is currently pending.

Underlying all of this: a constant fear that Goldcorp will move in at any time and throw everyone off their land.

Mining Re-Sisters from Guatemala was Produced by Friends of the Earth International, as part of their Community Testimonies project. This testimony was filmed by CEIBA and FOE Guatemala.

Credit to Community Solidarity Response Toronto (CSRT) for promoting the film on their website.