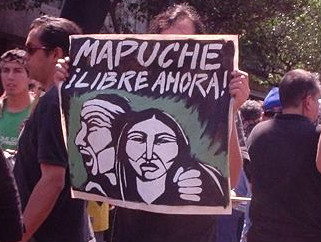 As Chilean military policeman Miguel Jara sits in custody for murdering a Mapuche land rights defender on August 12, during one of several land reclamation efforts led by the Mapuche—a group of Mapuche political prisoners announce that they have begun an indefinite hunger strike.

“Unto the repression, the injustices, and the judicial and political arbitrations, we will carry out our mobilization to the very end, and from now hold the authorities responsible for its ending”, the group said in a statement dated August 18th, the same day the Mapuche Territorial Alliance was formally announced.

The alliance, like the hunger strike, comes in response to the death of Jaime Mendoza Collío, 24, the latest casualty of institutionalized racism throughout the Chilean government, the courts, the military and the margins of Chilean society.

The imprisoned Mapuche are casualties in their own right. They were jailed four months ago, under Law No.18.314, the so-called anti-terrorist law.

According to Unrepresented Nations and Peoples Organisation (UNPO), 18.314 “doubles the normal sentences for some offenses, makes pre-trial release more difficult, enables the prosecution to withhold evidence from the defence for up to six months, and allows defendants to be convicted on testimony given by anonymous witnesses. These witnesses appear in court behind screens so that the defendants and the public cannot see them.”

First enacted by the former Pinochet dictatorship, 18.314 is “currently used solely against Mapuche communities and their leaders,” says Nina Dean, the Assistant General Secretary of Mapuche International Link. As a result of its application, “there are presently 37 Mapuche political prisoners” in Chile.

They are frequently relocated to prisons far removed from their communities, preventing them from seeing their families or getting any direct support. They are are also tortured, subjected to arbitrary medical examinations (for the purposes of fabricating evidence), and denied the right to legal defense.

Conversely, no police officer has ever been prosecuted for their involvement in crimes against the Mapuche.

THE MAPUCHE POLITICAL PRISONERS OF THE CHOQUE COMMUNITIES IN PROCESS OF TERRITORIAL RECLAMATION, IMPRISONED IN THE CONCEPCION PENETENTIARY, ANNOUNCE THAT BEGINNING TODAY TUESDAY, AUGUST 18TH, 2009, WE WILL BEGIN AN INDEFINTE HUNGER STRIKE, WHICH WILL HAVE THE FOLLOWING OBJECTIVES:

1. TO AVOID THE FORCED TRANSFER that is being imposed on us by the CHILEAN GOVERNMENT, through Gendarmerie (National Penitentiary Security), in conjunction with the Civil and Military courts.

With this, WE DENOUNCE that this transfer and isolation to different prisons across the country, from the cities of Rancagua to Puerto Montt, are in violation of our rights as MAPUCHE POLITICAL PRISONERS, since:

2. Moreover, we manifest our objection to recur to the Courts, especially before Military Justice.

All of this is in addition to the fact that the investigation is being held in secrecy, after four months of arrest, under the application of the Anti-terrorist Law, which completely impedes the possibility of a defense.

3. With this action, we are in solidarity with the family and community of our Peñi [brother] Jaime Mendoza Collío as well, who was cowardly murdered by militarized police of the Chilean State.

Unto the repression, the injustices, and the judicial and political arbitrations, we will carry out our mobilization to the very end, and from now hold the authorities responsible for its ending.

We call out to our Mapuche Nation, the Chilean People, and international opinion to be in solidarity with this cause and with all the Mapuche Political Prisoners.

FREEDOM FOR ALL THE MAPUCHE POLITICAL PRISONERS!