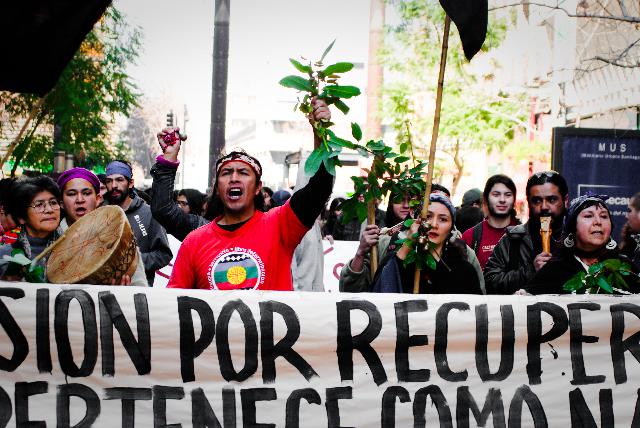 The reclamation began on July 23, about 2 weeks after the government of Michelle Bachelet refused to sit down with a group of Mapuche activists and talk about their concerns as Indigenous People.

The activists had traveled 680 km to meet with Bachelet, having already waited for weeks to hear from from Araucania’s governor about establishing a dialogue .

Before heading home, the group left Bachelet a letter, stating they would take action unless the govenrment addressed their concerns.

On July 23, the Mapuche began to occupy properties they identify as part of their traditional lands, including one held by a logging company. Roadblocks have also been set up in at least 5 different areas in Araucania.

The so-called leftist government finally decided to respond—with violence. The police were sent in to protect the logging company and evict the Mapuche – a “violent occupying force” as far as the government is concerned. “Both Mapuche and police were injured in the clashes” that followed, says IPS News.

Several other attacks against the Mapuche have also been reported.

“In response, Senator Alejandro Navarro, the presidential candidate of a new political party, the Movimiento Amplio Social (MAS – Broad Social Movement) announced… that he would file a lawsuit invoking the anti-terrorism law against the paramilitary group,” IPS continues.

The government itself does not appear to be taking any formal action against this immediate threat. Instead, they are emboldening the vigilante group by claiming the Mapuche effort is nothing more than “violent actions” led by a small minority: seven of Chile’s 2,800 indigenous communities.

Juan Carlos Curinao, a Mapuche “Lonco” or Chief, responded to the claims in a recent interview with IPS.Curinao said that the mobilization is in fact led by 40 Loncos, who together represent every Mapuche subgroup.

He also said that the reclamation is non-violent. “We don’t carry weapons to go around hurting non-indigenous settlers, we are fighting for our culture. It is the state that has attacked us, shooting at us.”

“If I occupy property, it’s not violence; I am reclaiming my territory,” he added.

While “there is no solution in sight”—-in large part because the government refuses to abide by international law and sit down with the Mapuche—there’s a small chance that things will turn for the better this week. The Senate has announced that it will hold a special session on Wednesday, Aug. 5 to discuss “the security situation that is affecting the region of Araucanía.”