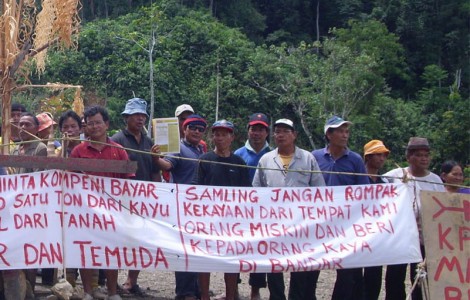 For the last month, the group has maintained a logging blockade to stop the operations of Samling Timber Company.

According to the Borneo Resources Institute (BRIMAS) in Miri, “the company simply encroached into their Communal land and Forest areas to carry out logging activities, without any consultation and consideration for their source of livelihood.” The operation has severely effected the indigenous peoples.

They resorted to [the blockade] after the company continued to ignore their demands and rights of access and benefits to their natural forest resources. Their numerous complaints to the authorities and the logging companies regarding their claims to the forest resources and the problems caused by logging have fallen on deaf ears.

The Kenyahs have forwarded some reasonable demands for social benefits and development of the community as they are the right stakeholders that should fairly benefit from forest resources in their area. However, these demands have been totally ignored by Samling. Having no other alternative and being compelled to bring attention to their plight, the indigenous Kenyahs of Kedaya Telang Usan area in Baram Region have resorted to staging this protest which is still continuing.

A week into the blockade, nearing the end of May, it seemed as if the Kenyah won. Samling shut down it’s operation. That is, despite the attempt of personnel from the Sarawak Forestry Corporation (SFC) to dismantle the blockade after Samling told them about it. However, they were restrained from taking the blockade down, says BRIMAS.

After that, the SFC filed legal action to have the Kenyah arrested.

Three days ago, on June 14, 2008, Malaysian Police were given the go-ahead to arrest them.

So far no arrests have been made, but you can be sure they will.