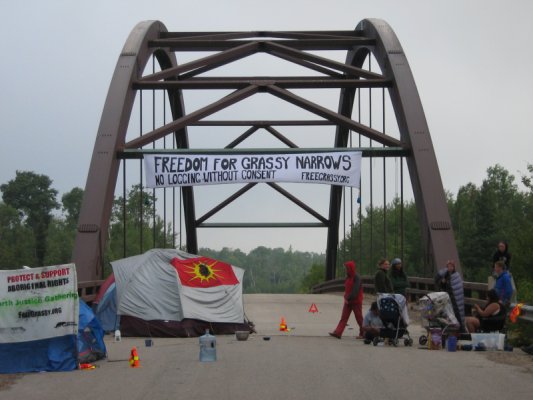 After more than a decade of direct action, the Asubpeeschoseewagong community at Grassy Narrows can finally rest easy. The industrial logging giant AbitibiBowater announced yesterday that they are retreating from the Whiskey Jack Forest, three-quarters of which is Grassy Narrows’ traditional territory.

See below for a press release by Greenpeace and links to further coverage. (Stay tuned for comments from Grassy Narrows)

Toronto, International — Greenpeace today welcomed a decision by forest-products giant AbitibiBowater to end its logging operations in the traditional territory of the Grassy Narrows First Nation and support the community in its struggle for rights over its traditional lands. The move follows a near decade-long campaign by the Grassy Narrows First Nation to suspend industrial logging in the one million hectare Whiskey Jack Forest, near Kenora.

“We congratulate AbitibiBowater for announcing an end to logging in this area. It is a bold move that shows the global importance of protecting the Boreal Forest and strong recognition of the inspired struggle by the Grassy Narrows First Nation to protect their traditional way of life,” said Richard Brooks, forest campaign coordinator with Greenpeace. “We are hopeful that AbitibiBowater’s decision signals a start to further improvements in its environmental and social sustainability and relations with other aboriginal communities.”

Besides ending logging, the company will no longer purchase or use any wood products from the Whiskey Jack Forest for its paper mill in Fort Frances. The decision supports ongoing negotiations between the Ontario government and the First Nation over land rights.

The struggle by First Nations for land rights and sovereignty continues across Canada, and the struggle to protect intact forests and the habitat of endangered species remains.

The Grassy Narrows First Nation has campaigned years for an end to logging it their traditional territory. The First Nation has filed lawsuits, conducted a five-year long peaceful blockade of a logging road and asked for an end to industrial use of its area without its free, prior and informed consent. Greenpeace and other environmental and human rights organizations have campaigned on behalf of the community to help build international public and marketplace pressure for a resolution.

“The formation of a new company presents an opportunity for positive change. The decision to end logging shows that AbitibiBowater has recognized this opportunity,” said Brooks. “The company has many other forest operations in Quebec and Ontario where logging in intact forest areas continues and sustainability has not been achieved. We hope that AbitibiBowater looks to these places next.”