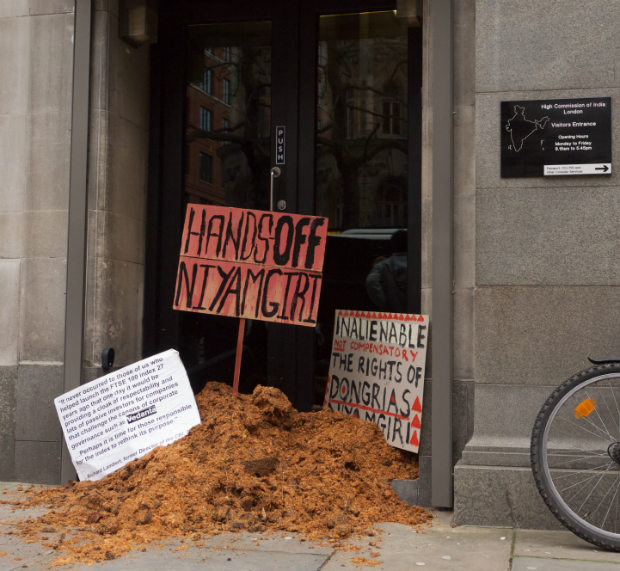 Foil Vedanta – 6 December 2012 – A noisy group of protesters armed with horns, megaphones and pots and pans crowded the entrance to the India High Commission today demanding that the Indian Government stop the controversial Niyamgiri mine in Odisha, India. Meanwhile five thousand tribals and farmers living around the Niyamgiri hills held one of largest demonstrations on the mountain since the movement began1.

Simultaneously judges in the Indian Supreme Court deferred their decision on Vedanta’s planned mega-mine until January as Vedanta announced the closure of their Lanjigarh refinery due to lack of local bauxite.

Outside the Indian High Commission protesters from Foil Vedanta shouted slogans calling for the Indian Government to put a final stop to Vedanta’s long contested bauxite project in the unique tribal region of Niyamgiri. They demanded that the state owned Orissa Mining Corporation is pulled out of dodgy deals it has made with Vedanta in an attempt to force the mine through the courts on Vedanta’s behalf. They called for London to withdraw support for the UK registered company accused by CBI’s former director Richard Lambert and the British parliament for giving the FTSE 100 a bad name(1).

At the height of the demonstration three activists dressed as builders dumped a large pile of mud in front of the glass doors of the India High Commission, blocking the entrance and enraging the security guards. A sign stuck into the mud read ‘Hands off Niyamgiri’.

Meanwhile in Odisha (previously Orissa), India, five thousand tribals and farmers rallied on the threatened mountain in anticipation of the Supreme Court’s final verdict on the mine they have opposed for more than ten years. They waved traditional axes and chanted slogans stating; “We demand complete removal of the company from this land” and “no bauxite no mining, no factory”. Internet and mobile phone connections in the area were disabled by the state authorities.

Simultaneously the Supreme Court of India deferred their final decision on the Vedanta Niyamgiri mine case until January 11th. This will leave Vedanta without local bauxite for their Lanjigarh refinery which they have were forced to close on Wednesday this week. Inside the court today judges considered the indigenous Dongia Kondh’s role in protecting the rich native forest. Presiding over the case Justice Aftab Alam said the verdict would rest on whether the judges consider the rights of indigenous forest dwellers ‘inalienable’ (absolute) or compensatory.

The contentious project was already officially stopped in August 2010 when Indian Minister of Environment and Forests, Jairam Ramesh, ruled against it citing violations of environment and forestry acts2. But this ruling was challenged on Vedanta’s behalf by the Orissa Mining Corporation, a state owned company with 24% shares in the joint venture to mine Niyamgiri with Vedanta(2).

On Wednesday Vedanta also announced the closure of the Lanjigarh refinery. The refinery was built at the base of the Niyamgiri mountains to process the 78 million tonnes of bauxite deposits found there. But Vedanta had no permission to mine the mountain and the local population were adamantly against it. As local and global protests pointing out the devastating environmental and social consequences of the planned mine grew in strength, Vedanta Aluminium was forced to buy bauxite from other states leaving them with accumulated debt of $3.65 billion from running the factory at a loss3. In September they gave the Odisha government notice that they would close the plant on 5th December if local bauxite had not been obtained4(3).

British registered mining company Vedanta have been named the ‘world’s most hated company’ by the Independent newspaper for their long list of environmental and human rights crimes for which they are being opposed all over the world5. Most famously Vedanta’s plan to mine mountains sacred to the Dongria Kondh tribe in Odisha, India, has led to mass protests and the Church of England among others pulling out investments.

During the hearing of the Niyamgiri hills case Vedanta’s counsel tried to again deny that the mountain is sacred to the Dongria Kondh who live exclusively on it. They suggested that if a temple was erected they would allow the Dongria to worship there. In reaction to this local farmer, member of the Kutia Kondh tribe, and long term activist against the mine, Kumuti Mahji today stated:

“This is not just about worship. The mountain is our source of life and our livelihood. Do the Dongria Kondh live anywhere else in the world? No. Their existence and survival depend on that mountain. If you take them away from it how will they exist? We will continue to fight the company. This mine will not be allowed.”

“Vedanta has assumed a cloak of respectability by residing and registering in London. Protected by the British Government and the London Stock Exchange it can access capital and hide it’s dirty face. The UK Government cannot turn a blind eye to major human rights crimes committed by this company. Vedanta should be de-listed from the London Stock Exchange and taken to court here in Britain.”

Press coverage of the demonstration:

See excellent Demotix report and pictures of the demonstration in London here.

See the Indymedia report of the London here for more details and photos.

Coverage of the Odisha demonstration on ‘Hot Hit News’ can be found here.

and at Newzfirst, ‘tribals protest against Vedanta refinery, demand complete eviction of plant.’

Economic Times of India, ‘Protest against Vedanta in front of the High Commission‘.

Hindustan Times, ‘Protest against Vedanta near embassy in London’.

(1) Vedanta was described in Parliament by Labour MP Lisa Nandy as ‘one of the companies that have been found guilty of gross violations of human rights’ . Ms Nandy in her speech quoted Richard Lambert the former Director General of the CBI: ‘It never occurred to those of us who helped to launch the FTSE 100 index 27 years ago that one day it would be providing a cloak of respectability and lots of passive investors for companies that challenge the canons of corporate governance such as Vedanta…’ 6

(2) The Lanjigarh refinery was built without the Free Prior Informed Consent of the local tribal and farmers population. In addition the original 2005 permission for the Niyamgiri mine (then given to Vedanta subsidiary Sterlite since Vedanta had been blacklisted by the Norwegian Government and was deemed unsuitable) was presided over by Justice Kapadia in the Indian Supreme Court. Kapadia later admitted that he had shares in Sterlite provoking calls for a review of the decision which never occurred. (see the attached Affidavit from top human rights lawyer Prasant Bushan for more).

(3) The million tonne per annum Lanjigarh alumina refinery was already temporarily closed during October after it ran out of bauxite. A week later they re-opened with a short stock of about 40,000 tonnes from Bharat Aluminum Company’s (Balco) Kawardah mines in Chhattisgarh and about 92,000 tonne from Gujarat Mineral Development Corporation (GMDC).“There are no more stocks as of now nor do we have any hope to get raw material from anywhere else to run the plant smoothly,” said the company official7.

Vedanta currently claim that a 2,500 workforce and 4,500 indirect jobs will be affected by the plant’s closure8. However at other times they have claimed there are around 550 direct employees while work is outsourced to 2,5009. Local activists claim many of these workers are brought in from surrounding states and that this does not compensate for the amount of local jobs lost in farming and small scale trading.

1 The largest demonstration up to now was inJan 2009, when a human chain of 7,000 surrounded the Niyamgiri mountains in a solidarity protest with Dongria Khonds and Dalits to be affected by the mine on their sacred hill.