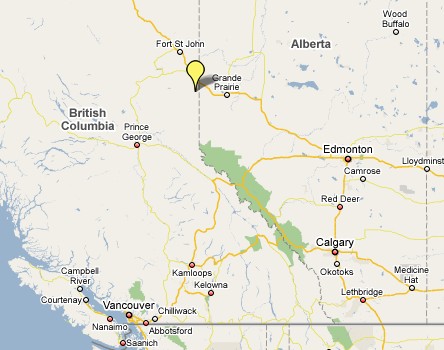 On October 17th, the Kelly Lake Cree Nation released a statement (below) denouncing the recent attempts to sabotage a nearby gas pipeline in northeast British Columbia.

On October 11th and 16th there were two separate explosions directed at the pipeline, which is owned by the Calgary-based EnCana corporation.

Neither explosion caused any serious damage to the pipeline, however the second one created a small rupture that forced its temporary closure. As root force explains, “workers had been on high alert since the first incident, [so] they discovered the leak before much of the gas… could escape or affect nearby communities.”

Six days ago there was a third explosion at the pipeline, which caused a second rupture. Once again the pipeline was closed and repaired.

A word to the uninformed

Following the discovery of the second rupture, a company spokesperson said there was “very minimal damage” to the pipeline and no cause for alarm. Nevertheless, it is important to understand what the local communities could have – and may still be faced with. The pipeline carries “sour gas,” a natural gas that contains high concentrations of the odorless and toxic compound Hydrogen sulfide.

Hydrogen sulfide occurs naturally in the environment as well as in our bodies, so it’s harmless under normal circumstances. However, too much exposure to the toxic compound can prove fatal.

Its effect on the human body resembles that of Hydrogen cyanide, which, as you may already know, is listed as one of the world’s chemical warfare agents. Low level exposure to Hydrogen sulfide can result in nausea, shortness of breath, eye irritation and fluid in the lungs. Exposure to high concentrations can cause death. The compound essentially deprives the human body of its ability to process oxygen — and it does so quietly.

That said, EnCana is undoubtedly monitoring the levels of Hydrogen sulfide around the pipeline. If the levels begin to climb (or skyrocket as a result of an explosion) an emergency evacuation procedure would be set in motion.

There’s a lot of ‘speculation’ coming from non-natives and the media about who’s behind these incidents. For the most part they are blaming the easy red target, the Kelly Lake Cree.

It’s true that the First Nation has been protesting against the company over a number of concerns, including matters of financial compensation and health and safety issues. However, by the same logic and reasoning non-natives could just as well be responsible for it. After all, there were non-natives taking part in the protests too!

Furthermore, all the protests have been peaceful. Even when Kelly Lake members set up a roadblock last June, and were faced with “angry and dangerous” non-native Canadians who “blasted through” with their cars, nearly running over four people—the First Nation remained peaceful.

Adding more fuel to blame the Cree Nation, an ‘unrecognized band’ according to the federal Government, there was an anonymous letter sent out before the first bomb went off. The letter warned the company to shut down its operation and leave the region, stating in part: “We will not negotiate with terrorists, which you are as you keep on endangering our families with crazy expansion of deadly gas wells in our homelands.”

The statement clearly implicates someone from the Kelly Lake Cree — but ,again, it could have just as easily been authored by a non-native.

If there’s any doubt in your mind about this possibility, just think of all the times that non-natives (and again, the media) blamed members of the Six Nations for sabotage around Caledonia, Ontario.

Almost all of those incidents later turned out to have been led by non-natives.

It wouldn’t surprise me in the least if the history was repeating itself here, especially with the specter of racism on the rise as it is in Canada.

Meanwhile, the Kelly Lake Cree Nation maintains that they’re not the ones to blame.

As’in’a’wa’chi Ni’yaw Traditional Territory (Kelly Lake) – As a community we are
of course frightened and concerned regarding the series of atrocities that occurred within this area this past week. Through media reports, it is my understanding the two serious incidents occurred on subsidiary lines which did not include the mainline short of an H2S leak.

Our people are living with anxiety and are uneasy with the unknown of whether
there may be further destruction that may cause a fatal blow-out. The citizens who live in the area, who are working with pipelines, trappers and hunters are on high alert. There continues to be extreme heightened awareness regarding human safety and who would do such a thing to endanger the lives to people in the area and to our community? What has come to my attention regarding some negative comments made indirectly through local media which mentions the proximity of the explosions to the Kelly Lake community.

We wish to reassure the Public that we do not support illegal activity or unlawful acts of violence that would involve or endanger the lives of people. I can assure you the citizens of Kelly Lake would never be involved in such actions. Any unlawful act is not restricted to any particular race, color, creed or political motivation. There is no defense for people who choose to go against the law. Our only concern is that the media does not give a negative reflection related to Kelly Lake, to the public.

It’s irrational to society when people create meaningless labels intended only to incite irrational emotions and the media is used to place biases the public may find
personally disagreeable. As you know we have lived in this area since time immemorial and a majority of our families work in the oil and gas sector. Our first concern is that if any pipeline ruptures, the human, wildlife and environmental impacts would be devastating to all surrounding communities. We acknowledge that our community periodically has had differences in values but like other concerned Canadians this type of extreme activity of placing people’s lives in danger would not be tolerated.

As we have made all Industry groups aware during meetings we do face many challenges
regarding the health and safety of our community. This expression is brought out through the many meetings we have had with industry groups with regard to emergency response preparedness and evacuation planning for the citizens of Kelly Lake.

In terms of the community disaster drill that was held on our traditional lands this past summer, I want to assure you that at no time did my people threaten the safety of the public or industry. In fact a majority of the Public acknowledged the importance of working with First Nations people and stated that they have the same health and safety concerns in the Northeast part of the Province. There are other non-aboriginal people in the area who have witnessed the cumulative impacts of energy development in Northeast British Columbia. Engaging in any shocking and cruel act-that may endanger the lives of the Public- is not a way of life or teaching of our people. We are hard working tax-paying members of society who want the same as the average citizen of Canada. The health and safety of our country is paramount.

We are not opposed to development within our traditional lands and we believe that working with industry on all energy related matters will provide a voice for First Nations to look at the enormous opportunities and challenges ahead.

We have expressed our deep concerns on how large-scale projects in northeastern BC, not
only impact our Aboriginal Title and Rights but as well as the immediate and cumulative
environmental impacts of such proposals. We are the stewards of the lands that we continue to inhabit and as Canadians we should all be very mindful of our future generations’ environmental inheritance. We also know that it is of more important to work together on these vital issues. We do not believe in violence and I am not aware of any citizen of Kelly Lake who has ever engaged in acts of extreme violence.

We know that it’s not industry’s obligation to consult with First Nations and we want the public to know that we are proactively engaging the federal and provincial governments to ensure our voices are heard. This process is through legal and negotiated mechanisms that we are actively engaging in at this time.

We are concerned for Public safety, Encana and its employees and the terrible position we all have been placed in this past week. We sent a letter to Encana advising the same. On behalf of the citizens of Kelly Lake, we are watching out for unusual activity in the area. Should we observe anything, we will advise Encana and the R.C.M.P. We will be attending the town hall meeting in Tomslake, B.C. to find out further information regarding the support that our community also needs regarding the health and safety of our citizens. We are in support of the efforts of the RCMP and hope they will find the offenders soon, so they can be dealt with to the fullest extent of the law.