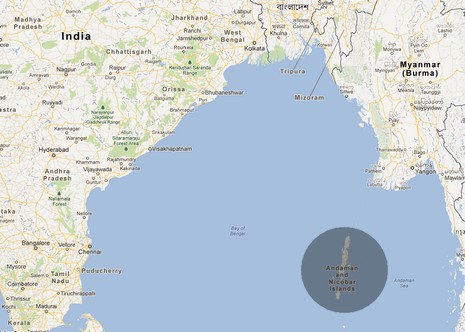 India’s Supreme Court finally banned tourists from traveling along the Andaman Nicobar Trunk Road, a controversial highway that was used for more a decade to conduct dehumanizing “human safaris” on the Andaman and Nicobar Islands Union Territory of India.

The welcomed decision arrives almost exactly one year after Gethin Chamberlin, a reporter working for the Observer, released a disturbing video that shows a group of Jarawa women and children being forced to dance for tourists. In the video, a police constable can be heard ordering the group of Jarawa, “Come on, do it. Dance for me. Dance now”. The Jarawa are also told that they can get more food from oncoming tourists.

Soon after the video was made public, Chamberlain released an equally disturbing audio recording in which he, posing as a tourist, innocently asks a tour operator how much it would cost to go see the Jarawa. Unaware that he was being recorded, the tour operator replies, “For the trip, uh, vehicle and… all like 25 to 30,000 like that. Because the policeman take 10 to 15 like that. And vehicle and some gift to the tribals also.. like fruits, biscuits…”

The public’s reaction to both recordings left the government with no choice but to act. As an initial response, Chidambaram Palaniappan, the Union Minister of Home Affairs of the Republic of India, ordered the arrest of the videographer and the tour operator. Union Tribal Affairs Minister V. Kishore Chandra Deo also assured that he would look into the demand for the closure of the Andaman Trunk Road.

At first there was no mention of the police officer; however, in February 2012, one constable Silvarious Kindo was arrested and interrogated after being identified by the Jarawa in the film.

Four months later, the Supreme Court renewed a 2007 order for the the Andaman government to prohibit all commercial and tourism activities within a 5-kilometer Buffer Zone surrounding the Jarawa’s reserve.

The court stated at the time,

The Court also ordered the closure of two major tourist attractions on the island, both of which are located inside the buffer zone: the limestone caves and the mud volcano on Baratang Island. In order to reach either site, tourists must either travel by helicopter or they must travel the length of the Great Andaman Trunk Road. The latter course takes the tourists directly through the Jarawa’s reserve.

That could have been the end of the story; however, the Andaman government ultimately decided to disobey the court ruling and allow the tourist attractions to remain open, allowing the infamous human safaris to continue.

Gethin Chamberlin returned to the Andaman Islands in August 2012 to see where the situation was at. In a new report for the Observer, he indicated that as many as 250 vehicles were still passing through the reserve each day. The Indian commercial broadcasting television NDTV also broadcast a documentary, filmed in September 2012, showing the tourists on their way to the famous limestone cave. The film contains interviews in which tourists freely admit that their real interest was not the cave but the chance to catch a glimpse of the Jarawa.

In response to this and other exploitation of the Jarawa Peoples, last week, the Supreme Court took things one step further by formally banning all tourists from using the highway–without exception.

“This new interim order is positive,” said Stephen Corry, the Director of Survival International. However, Corry continues, “it will be meaningless if the Supreme Court allows the Andaman authorities once again to ride roughshod over its ruling. It’s vital that the order is upheld and the human safaris end – the Jarawa themselves must decide if, when, and where outsiders traverse their land.”

Sadly, the Andaman government is continuing to defy the court. After the tourism ban, the regional government announced that it would implement a lesser version of the Buffer Zone in order to keep the limestone caves and mud volcano open to the public.

Equally distressing, there are no Jarawa voices to be heard in this ongoing legal and moral battle.

August 2013: As Hannibal Rhoades would later report at Intercontinental Cry , the Supreme Court reversed its interim ban in March 2013, allowing the road to be fully re-opened. Tour operators who had been unable to use the road were reportedly readying their vehicles within days of the decision, gearing up to resume the profitable ‘human safaris’. This total u-turn was accompanied by equally distressing news that Supreme Court reportedly asked the island’s authorities if they wanted to keep the Jarawa isolated or assimilate them into the mainstream.

Any such decision to ‘mainstream’ the Jarawa would, at present, violate the government’s official Jarawa policy, which states that: “No attempts to bring them (the Jarawa) to the mainstream against their conscious will…will be made.”