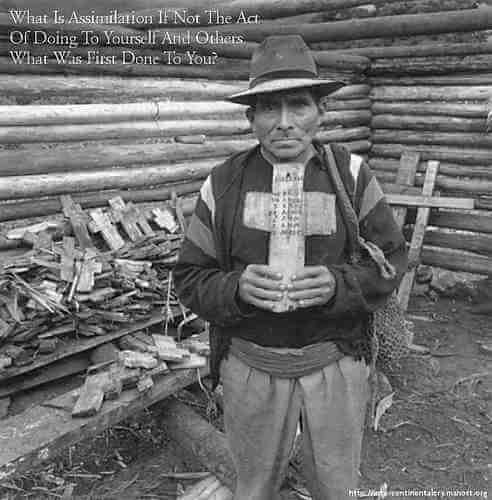 A few times recently I’ve encountered folks online trying to understand the band council system and why so many are against it. For them I started writing an article about it, but I just came across the following text which breaks it all down very nicely. So, here you go….

What is the Indian Act?

The Indian Act is a law first passed by Canada in 1876. It imposed government control over all Natives, covering many aspects of life. It focused on 3 main areas, however: band councils, reserves, and status (membership). Its primary purpose was (and is) to control and assimilate them into Canada. It was always intended as a temporary set of laws until Native peoples were successfully assimilated.

What is a Band Council?

Under the Indian Act, 1876, a band is a “group of Indians for whom reserve land has been set aside and money is held by the Crown (the government of Canada). A band council is comprised of a chief and a certain number of councilors, usually elected by band members.

The band council corresponds to a municipal town or village council, and the chief to a mayor. Band councils were used to replace traditional forms of social organization. Many of the first band councils were organized by missionaries, who used them to exert control over communities.

A band council derives its authority to govern from the Indian Act, and is subject to both provincial and federal laws, as well as the Department of Indian Affairs. It gains power from the money and resources provided by the government, which is used at the discretion of the chief and council. This provides it with a great amount of control and influence over the community (as intended).

What is the department of Indian Affairs?

The DIA (presently titled Indian and Northern Affairs Canada, INAC) is the federal department responsible for administering the Indian Act over some 609 bands across Canada. It has an annual budget of some $6 billion, some of which is distributed to band councils as both a form of control and to ensure government policies are carried out. The first Indian Department was formed in 1755 as part of the British military in N. America. Many of its first members were military officers.

What is the government’s strategy Re: the Indian Act?

The strategy of the government us to remove the Indian Act and all special legal status for Natives and reserve lands. This has always been its long-term goal, for it would mean the legal (and political and economic) assimilation of Native peoples was complete. In 1969, Canada proposed abolishing the Indian Act and the DIA (the “White Paper”) but was met with strong opposition from Natives. Today, both government and chiefs call for an end to the Indian Act, which they claim is now an obstacle to economic progress, Of course, how can Natives be assimilated if they continue to have special legal status (including reservations?)

Self-government is the current government plan for assimilation. It involves transforming band councils into municipal governments, with similar powers and responsibilities. Under self-government, bands gain more control over land, resources, finances, and local governace. Selling or leasing land, resource exploitation and taxation are seen as the primary means for bands to attain economic self-sufficiency. In this way, self-government will really be the self-administration of our own oppression.

What is the ‘Aboriginal Business Elite’?

The Aboriginal business elite are Natives who have gained wealth, status and power through their involvement or association with the Indian Act system. Much of the Native elite’s wealth comes from government funding and corporations.

Today, many bands handle multi-million dollar budgets and double as Native corporations involved in many diverse businesses (logging, mining, leasing of reserve land, garbage dumps, airlines, water bottling, etc.). Yet, less that a century ago, bands were directly administered by DIA and its Indian Agents. What changed?

In the 1960s, Indian Agents began to be phased out. They were replaced by chiefs and councilors trained by the DIA to implement government programs and to administer the band councils.

As well, in the 1970s, thousands of Natives began attending colleges or universities. By the 1980s, as many as 30,000 Natives may have gone to university to study economics, political science or law, skills which became valuable as they returned to their reserves and began their careers in the Indian Act system.

In return for their collaboration, many chiefs and councilors enjoy lives of material wealth and luxury. Their collaboration involves enabling corporations o better exploit natural resources and maintaining a system of oppression over Natives.

Assimilation is the merging of one entity, or group, into another. In N. America, this has involved the destruction of traditional Native culture and social organization, ans their replacement with European forms.

In order to accomplish this, Native peopls first had to be weakened through biological warfare and military violence. After this, they were forced onto reservations where they were then subjected to policies of assimilation.

These policies included Christian-ization and Residential Schools (run by the Churches). Until the 1970s, generation of Native children and youth were forced into Residential Schools, where they were forbidden to practice their culture (inc. language) and indoctrinated with European values and ways of life.

Today, this assimilation continues through the education system as well as the corporate media and entertainment industries. Through these, our view, beliefs and values are shaped by the system.

The success of assimilation can be measured in how much a person accepts these values and beliefs as their own, which is reflected in their way of life. Today, many assimilated Natives see getting a job, having money and material items, etc., as positive life goals.