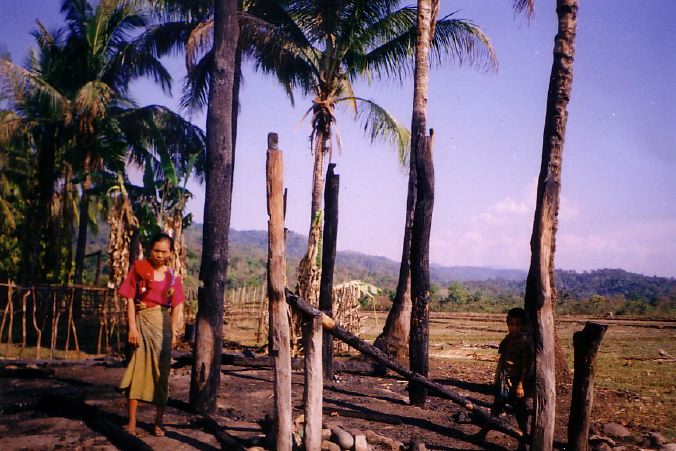 May 27 – Taino Nation: Amerindian groups call on Barama to cease Akawini logging -A release from the two groups said yesterday that Barama began logging in Akawini in February 2006 “ostensibly” on a subcontract it signed with the IWPI. According to Akawini Toshao, David Wilson, the Akawini Village Council has never seen this subcontract “and we were never consulted before IWP entered into this subcontract with Barama.”

Poisoned by Pesticide, Bananeras rise up! – Many had spent their lives toiling on banana plantations that U.S. companies operated in this region some 30 years ago. By day, the workers had harvested bunches of fruit to ship to North American tables. At night, some had sprayed pesticide into the warm, humid air to protect the trees from insects and rot. As the decades passed, the workers came to believe that the pesticide, called DBCP, had cost them their health.

May 24 – Desert Rock power plant: BIA issues death certificate for Navajos – The BIA’s cozy relationship with Navajo politicians and the corporation Sithe Global was obvious in the BIA’s recommendation to build the Desert Rock power plant, the third power plant in the Four Corners area. Navajos said the draft environmental impact statement is no more than another alien document, another BIA-issued death certificate for the Navajo people.

“They already made their decision to approve the project and this DEIS is just going to justify their decision,” said the Navajo from Sanostee. “But not if I can help it, our elders and our youth are ready to stand with us against the Sithe Lords and their puppet DPA (Dine’ Power Authority).”

May 23 – Indigenous Resistance Movement Defends Traditional Beliefs – Twenty indigenous people have been occupying the abandoned building of the Museu do Indio in Rio de Janeiro since October, to call attention to “500 years of resistance to genocide,” a view of their history that has acquired new relevance in the light of the Vatican’s latest position on Christian evangelisation during the colonial era.

Borei Keila Community Relocation – In 2003 it was touted as a great leap forward into developing a social housing program, an alternative to the widespread forced land evictions in Cambodia. Four years later, in May 2007, men, women and children are living under tarpaulins amid the rubble of their demolished houses. This is the plight of families living at Borei Keila in the heart of Cambodia’s capital.

Chago win right to return home, for the third time – In 1966, the British Government leased Diego Garcia and the Chagossian Islands to the US Government, for a strategic military base. But the US government wanted a land free of people, and so in that same year until 1973, the British government secretly and systematically removed the entire population… recently, the court once more reaffirmed the Chago’s right of return.

May 15 – 7 Peasants Arrested for Defending their Land – Santiago del Estero’s Peasant Movement (MOCASE) issued a communique informing that seven peasants were arrested in El Quebrachito town in Santiago del Estero province, Argentina on Friday. According to MOCASE, the peasants were arrested for protecting their territory from the interests of local large estate owners.

Tibetan women take to the streets against Beijing slavery – Thousands of Tibetan women met yesterday in Dharamsala, shouting that they would never accept Beijing’s slavery. They gathered in the Indian city to observe the 48th anniversary of the day when thousands of other Tibetan women rose up against Chinese rule only to be forced into exile by the invading People’s Liberation Army.

Biofuels displace indigenous people – Indigenous people are being pushed off their lands to make way for an expansion of biofuel crops around the world, threatening to destroy their cultures by forcing them into big cities, the head of a U.N. panel said Monday.

West Papua: Police Surrounds Indigenous Church – On May 15, Indonesian Police occupied the Kingmi Church in the capital of Papua province, Jayapura… Six police trucks and a water canon were stationed outside the church offices. Paramilitary police armed with rifles occupied the roof of the building, and more than 50 policemen were positioned outside. Following the police action, 200 members of the Kingmi Church protested outside the headquarters, blocking one lane of traffic.

Burma: In the Name of Development – It is the latest bloody chapter in the world’s longest-running civil war that has lasted nearly 60 years and sent millions fleeing into Thailand. The conflict also displaced 500,000 people in Burma. But the newest offensive, out of sight in the jungle, is driven by the Burmese junta’s aim to control resource-rich eastern Burma by enslaving some villages and destroying others – killing, forcibly relocating or driving out the inhabitants.

May 12 – A Plea from the Marshall Islands – During our struggle to get the US Navy to stop bombing our island municipality of Vieques, people from all over the world gave us their solidarity. A Land is Life Conference took place in Vieques. People from Hawaii, the Marshall Islands, Guam and the Philippines came to share their experiences and show solidarity for our struggle. The US no longer bombs Vieques. But it has left its toxic wastes there to continue contaminating the land. Its clean up operations are not careful of the islands eco system nor do they use the best technology avalable to minimize the contamination.

May 4 – We Will not Let Any Development Plan Endanger our Culture – Argentina – “Pioneer operated for almost six years within the community. During all these years there were conflicts because the company refused to recognize the community invoking its right to operate under the contract granted. The US company sold all its assets in Argentina to another US transnational company, Apache Corporation. So it also sold the liabilities and lawsuits of the previous company. What is more, there are over 10 oil wells in our community that are not operating . Apache cannot exploit these oil wells although the provincial government granted it a license to do so. The community refused, and we will not allow another incursion in our territory, so the oil wells are stopped. So now they want to know how this situation will be solved.”

Peru: Amazon indigenous warn Oxy over toxins – Members of the indigenous Achuar communities in the Amazon basin in the Peru-Ecuador border region have notified US Oil Company Occidental Petroleum (Oxy) that they will bring a lawsuit against the company in the US if it will not clean up toxic waste from drilling.

May 2 – Shell Disobeys Court Order; Continues Gas Flaring in Nigeria – “While Shell and its shareholders count their profits, all we can count are the early graves that their toxic gas flares keep sending our people. It is morally wrong for Shell to continue with gas flaring despite a ruling that has ordered them to cease it. Shell continues not only to waste Nigeria’s natural resources in this way, but is criminally wasting the lives of poor people in our communities who cannot avoid the impacts of gas flaring.”

Lawsuit against TotalFina for Crimes against Humanity Reopened in Belgium – According to the plaintiffs, the oil corporation is responsible for providing logistical and financial support to the Burmese military junta that seized power in the country, several decades ago. Burmese opposition leader and Nobel Peace Prize winner Aung San Suu Ky supports the lawsuit and said TotalFina is ‘the cornerstone of the military regime’. The complicity between corporations and the Burmese dictatorship has been pointed out in several opportunities. The regime has pleased the company by allowing forced labor, among other abuses.

May 1 – Tradtional Land owners overturn mine expansion bid – Indigenous people of the Gurdanji, Mara, Garrawa and Yanyuwa language groups in the Northern Territory have just had a victory in stopping the expansion of the Macarthur River Mine, a proposal that would have diverted a river that is of great importance to their dreaming: their identity.