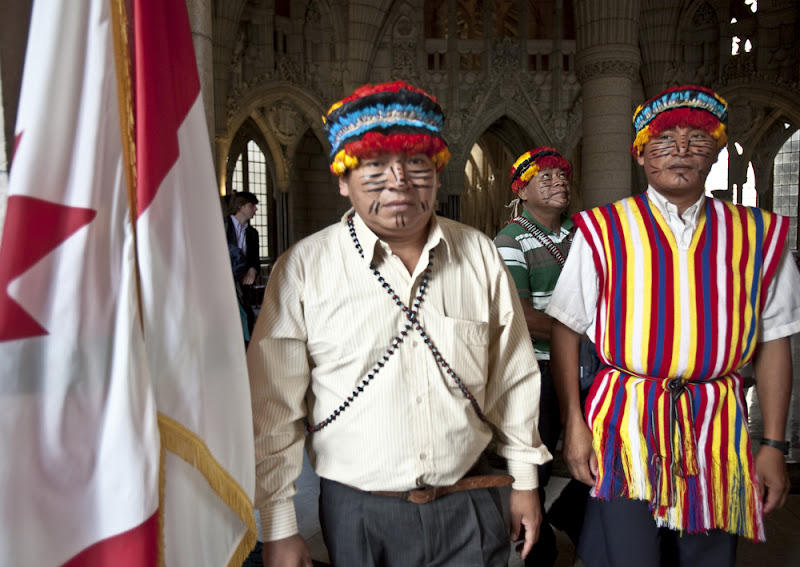 The Achuar Peoples have a won a major victory in their eight-year struggle against a Canadian oil company in the Amazon rainforest. Yesterday, Talisman Energy announced that it will be withdrawing from the Achuar’s ancestral territory–and all of Peru–just as soon as it finishes some ongoing commercial transactions.

“We have fought long and hard against Talisman’s drilling in our territory because of the negative environmental and social impacts we have seen from oil drilling around the world,” said Peas Peas Ayui, President of the National Achuar Federation of Peru (FENAP), in a recent press release by Amazon Watch. “Now that Talisman is leaving we can focus on achieving our own vision for development and leave a healthy territory for future generations.”

The Calgary-based company first bought into the Achuar’s territory in 2004 by investing in Block 64 with US-based Occidental Petroleum (Oxy). As of 2011, the company owned 50% of Block 64 and 70% of Block 101. These oil blocks, covering some 4 million acres (1.7 million hectares) of pristine rainforest, entirely overlap the Achuar’s ancestral territory, says Amazon Watch.

From day one, the Achuar made it clear that they were not going to just sit back and let another oil company have their way with the land, which has already been contaminated by 30 years of exploitation by Oxy and more recently by Argentina’s Pluspetrol.

Amazon Watch, which has worked alongside the Achuar since 2004, provides some background:

“Oxy cut costs [to its drilling operations] by dumping 9 billion gallons of ‘produced waters’ directly into the rivers instead of re-injecting them. These ‘produced waters’ contain highly toxic substances such as barium, lead and arsenic and together with hundreds of ongoing oil spills have destroyed hunting and fishing grounds and left the Achuar with severe health problems.

“Adults and local children have tested positive for dangerously high blood-lead levels, and local residents cite countless tales of unexplained diseases, tumors, skin ailments and miscarriages from oil exposure. Fish and local game are not fit for consumption and fraught with contamination, and the soil is also no longer fit to produce agricultural crops on which the Achuar depend for subsistence.”

Talisman was headed down the same dirty path. Despite enormous local opposition, the company went ahead with seismic testing and exploratory drilling operations. It also built up a false image for shareholders, the government and the international community by claiming to have support from communities and so-called good neighbor agreements with 66 communities downriver from their operations.

The company never had such widespread backing–a fact that Achuar Leaders made clear throughout their four separate trips to the Canadian landscape.

“Talisman has had to face up to what the Achuar told them when they first invested in Block 64: The company cannot drill without the consent of the Achuar people,” said Gregor MacLennan, Peru Program Coordinator at Amazon Watch. “Talisman’s exit sends a clear message to the oil industry: Trampling indigenous rights in the rush to exploit marginal oil reserves in the Amazon rainforest is not an option.”

“We are the owners and the original people of this land,” said Peas Ayui. “No outside person or company may enter our territory by force, without consultation and without asking us. We have been fighting against oil development on our land for 17 years and we maintain the same vision to protect our territory and resources for future generations. Let this be a clear message to all oil, mining and logging companies: we will never offer up our natural wealth so that they can extract our resources and contaminate our land.”

By the looks of things, Talisman has just clued in to that fact. Richard Herbert, Talisman’s vice-president of international exploration, told the The Canadian Pres that the company is leaving because they were “unable to build a material resource position in Peru.”

In other words, it’s because the Achuar wouldn’t take “yes” for answer.