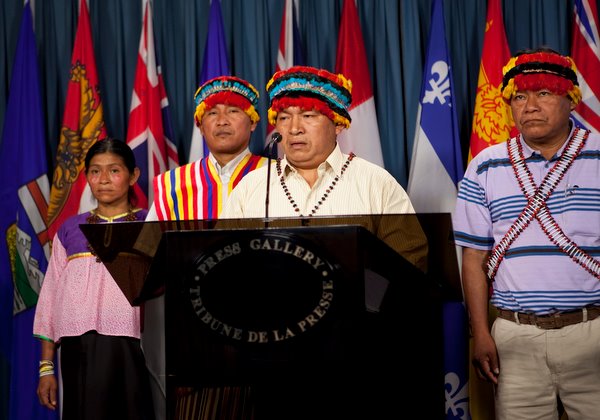 A group of Achuar delegates are in Canada this week to confront the Canadian oil company, Talisman Energy, for drilling for oil in their ancestral territory in the Peruvian Amazon.

At a press conference yesterday in Ottawa, the Achuar leaders, who are in Canada for the fourth time since 2008, explained that Talisman Energy is already causing serious environmental problems on their ancestral lands as well as social problems. As Peas Peas Ayui, President of the Achuar Federation of Peru FENAP, stated, “Talisman is creating divisions in the community. This is a strategy that Talisman applies in order to create conflicts and weaken us.”

Last year, Father Diego Clavijo, a Salesian missionary priest, testified via satellite phone from the remote Amazon community of Kuyuntsa, that Talisman has been buying local support for their drilling operations, creating a divide that runs the risk of exploding into violence.

In the past, the Achuar also “brought charges against Talisman for transporting a group of armed pro-oil community members to confront protesters at a Talisman drilling platform in May 2009,” says Amazon Watch. Fortunately, a violent confrontation was averted, but that is no excuse.

What’s more, Talisman is operating without the expressed consent of the majority of the Achuar peoples, despite company president John Manzoni’s promise in 2008 that “Talisman will not work in Peru in areas in which it does not have an agreement with the community.”

Remembering Manzoni’s words all too clearly, Peas stated at the press conference, “Private companies want to enter into our ancestral territories where we live, without consultation, and they don’t have our consent. The question is, why hasn’t the oil company Talisman asked us, the owners of the land? Entering our land without permission is an abuse of our rights.

“We know well the terrible conditions left by oil operations in other regions [of the Amazon] and we have seen how our brothers and sisters are suffering in these places. The Achuar people’s demand is that Talisman leave our lands.”

The Achuar have a long history of problems with oil companies. On the eastern side of their territory, drilling has been taking place since the 1970s, “first by US-based Occidental Petroleum (Oxy) and now by Argentina’s Pluspetrol” explains a recent briefing (PDF) by Amazon Watch.

“For over three decades Oxy cut costs by dumping 9 billion gallons of ‘produced waters’ directly into the rivers instead of reinjecting them. These ‘produced waters’ contain highly toxic substances such as barium, lead and arsenic and together with hundreds of ongoing oil spills have destroyed hunting and fishing grounds and left the Achuar with severe health problems.”

“Adults and local children have tested positive for dangerously high blood-lead levels, and local residents cite countless tales of unexplained diseases, tumors, skin ailments and miscarriages from oil exposure. Fish and local game are not fit for consumption and fraught with contamination, and the soil is also no longer fit to produce agricultural crops on which the Achuar depend for subsistence.

In response, the Achuar have mobilized through peaceful means, forcing Pluspetrol to re-inject ‘produced waters,’ and filing a class action lawsuit against Occidental Petroleum in the U.S.”

Talisman’s oil adventures are taking place west of Pluspetrol’s industry settlement, in the middle of the Achuar’s ancestral territory.

From April 29th to May 2nd, the Achuar delegates will be in Calgary, Alberta, for Talisman’s annual shareholder meeting.

Prior to the shareholder meeting (April 26th through April 28th) the delegates will be in Fort McMurray, AB for a “Toxi-tour” of Sycrude’s tar sands operations, and meetings with local First Nations.

After the shareholder meeting, the delegates will be in Vancouver, BC (May 3rd through May 6th) for Presentations at the UBC Global Indigenous Conference 2012 & Friendship Centre.

And then it’s off to Haida Gwaii, BC (May 5th through May 8th) where the Achuar will meet with Haida elders and leaders and go on a tour of Haida territory.