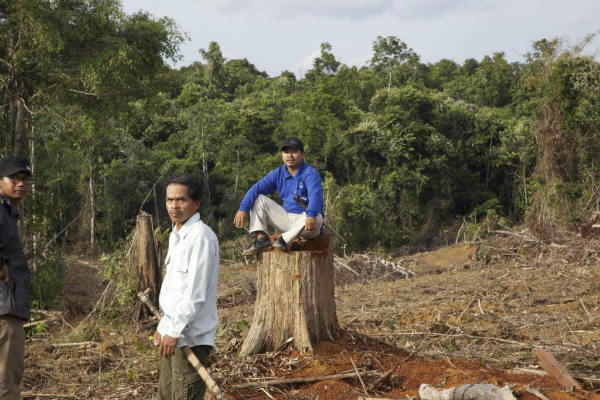 Petrus Asuy (foreground) and his son Masrani on an Ulin stump on the Dayak Benuaq's customary land (c) EIA/Tom Johnson
Support our journalism. Become a Patron!

Below, The London-based Environmental Investigation Agency (EIA) discusses their ongoing effort to assist a struggling Dayak community in Indonesia’s East Kalimantan province. Working alongside their Indonesian partner Telapak, EIA is providing the community of Muara Tae with campaigning and evidence-gathering skills to more effectively defend their land and stop companies from razing what little remains of their ancestral forests.

Campaigners from EIA are this week returning to the beleaguered forest community of Muara Tae in Indonesia’s East Kalimantan province, where villagers are attempting to take a stand against devastating encroachment by palm oil plantations.

EIA has been working to raise awareness of, and support for, the indigenous Dayak Benuaq community’s confrontation since November last year – but this time we’re going back to share our wealth of campaigning experience, supplying cameras and training to enable villagers to capture visual evidence of the destruction of their environment and to expose such abuses to a wider audience.

More than 800 families in Muara Tae rely on the forests for their food, water, medicine, culture and identity; the village has lost more than half of its land and forests during the past 20 years to mining companies, and is now under assault from palm oil companies aggressively expanding into its ancestral forests.

Although it is undercover investigations and exposés of environmental crime for which EIA is often best known, we also have a long track record of carrying out training in the field with local groups and individuals.

A key aspect of our long-standing campaign in South-east Asia to combat illegal logging and the illegal timber trade has been to build the capacity of civil society in Indonesia through a project delivered alongside local partner Telapak, which has also been working with us in Muara Tae.

EIA visuals specialist Paul Redman will be heading the workshops in Muara Tae; he has been involved in training activists for almost a decade, in India, Indonesia and, most recently, Tanzania.

Joining him for the next two week is new Visual Communications Officer Emma Clark, who will also be producing a videoblog of her experiences during the training workshop.

“Sharing our knowledge though training is a vital part of the way EIA works,” said Redman. “We’re not the kind of organisation that turns up and starts telling people what to do – it’s far more productive to give them the communications tools they need and so empower people to effectively campaign for themselves.”

For more information or to set up an interview with one of EIA’s campaigning trainers, contact Paul Newman, EIA Press Officer, paulnewman(at)eia-international.org