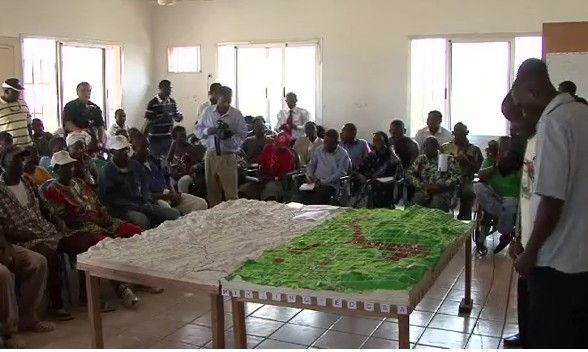 Close to our Ancestors: Gabon forest peoples map their land

In 2002, El Hajj Omar Bongo Ondimba, then President of the Republic of Gabon, signed into existence thirteen National Parks. The Parks were designed to represent different biomes and important biodiversity enclaves in this Congo Basin country.

This video, made in 2010, documents the experience of Babongo and Mitsogho villagers building a three dimensional model of their home territory which includes the Waka National Park in the Chaillu Massif, Ngounié Province. Waka NP is purported to have the highest primate density of any place on Earth, in an isolated mountainous equatorial rainforest threatened by foreign logging concessions. This territory, mostly in Ikobey District, is also home to Babongo “Pygmies”, an indigenous hunter-gatherer people and their neighbours, the hunting-farming Mitsogho people.

The Participatory 3 Dimensional Mapping (P3DM) exercise provides an opportunity for indigenous and local people to engage with government about their rights, good governance and decision making in relation to the Protected Area, using their own languages and intimate knowledge of cultural and natural landscape. With the support of national and international NGOs and indigenous peoples’ organisations from across the Congo Basin, the Babongo and Mitsogho villagers were able to use the map as a platform to speak to local and Provincial government about their concerns and to present a vision of participation and democratic governance. The video speaks to the challenge of conserving biodiversity and sustaining local cultural diversity, Protected Areas governance and livelihoods. The project was supported by MINAPYGA, Brainforest Gabon, Rainforest UK, CTA and IPACC with the cooperation of Wildlife Conservation Society (Gabon) and the Agence National des Parcs Nationaux of the Republic of Gabon.