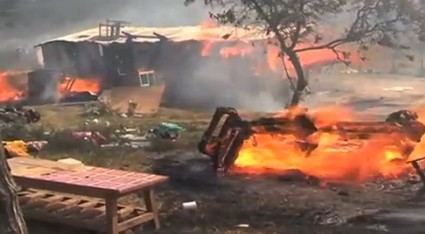 July 26, 2013 was a gloomy day for the Maasai community who live in Narasha in Naivasha, Kenya. By day break, hundreds of hired goons accompanied by armed police officers stormed the settlement and burned over 61 homesteads. During the raids 500 lambs, 200 calves and food that was in stores were burnt. During the ensuing melee 2 men were shot and wounded and are currently receiving treatment. Over 2000 people were left homeless and are currently living in the cold without food or shelter.

Narasha has been home for the Maasai but a land deal perpetrated by the former government regime has perpetually been bent on grabbing the Land. The land in question has allegedly been sold to KenGen for the production of geothermal power with funding from the World Bank.