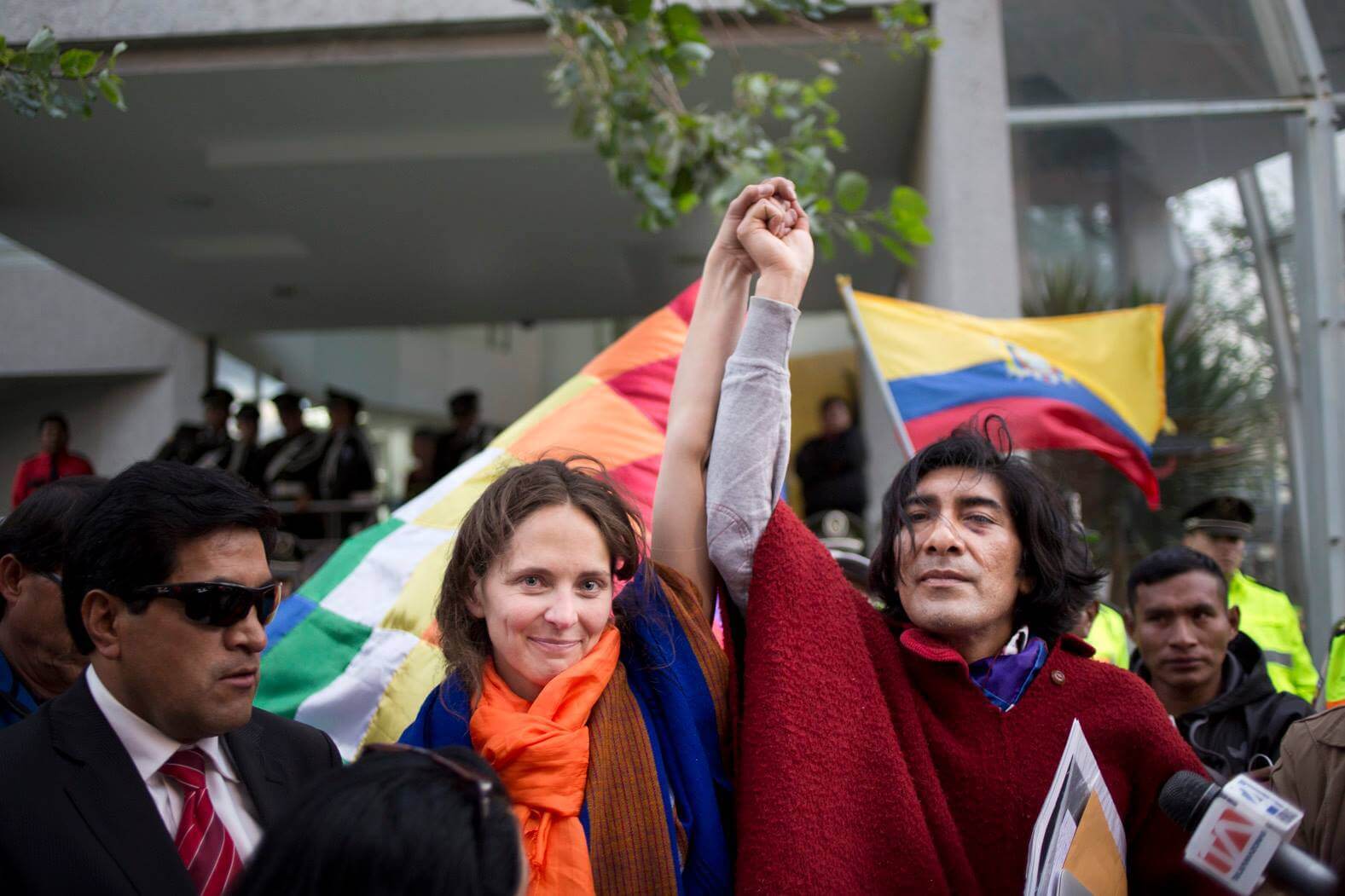 The Professor of International Relations (Universidad San Francisco de Quito) was deported to Brazil last August after Ecuadorian police officers assaulted and arrested her while accompanying the Indigenous movement in a demonstration against government policies.

At the time of the attack, which was caught on film by a journalist working for the newspaper El Comercio, Manuela was walking alongside her partner, the Kichwa lawyer and president of Ecuarunari, Carlos Perez Guartambel.  Carlos Perez, who has faced a legacy of persecution for his work in defense of water rights, told IC last August, “I am still bruised over my left eye where the police kicked me in the head, hit me with their batons and punched me.”

The beating that Manuela Picq received was more severe. She lost vision on her left eye for many hours, and spent the night in the hospital for medical treatment. Manuela later told reporters that she was “held hostage” by police who did not allow her to go to her university’s hospital and kept her heavily guarded at the Police Hospital. In the early morning, still under police escort, she was verbally informed by a police officer that her work visa had been revoked and was detained at a center for irregular immigration.

“Censorship and criminalization are still on the rise in Ecuador. Indigenous leaders are sentenced to jail for ‘altruistic terrorism’ as they defend water rights; cartoonists are taken to court for ‘inaccuracies’; people are jailed for tweets. Fundamedios, an organization that monitors freedom of expression, recorded more than one aggression to the press per day in 2015,” says Manuela. “Me being expelled is just the tip of the iceberg.”

After being detained for five days, Manuela was released; but her visa was not reinstated and she was forced to leave the country. She departed for Brazil before making her way to Germany as a research scholar at the DesiguALdades.net project at Free University of Berlin. During her stay in Germany, she reached out to IC to find out if we wanted to help bring more unheard indigenous voices and perspectives to the international community.

“Indigenous politics matter to world politics at large. We must listen to Indigenous voices if we want to understand the world we live in. We must find solutions with them,” adds Manuela.

“We were deeply honoured by Manuela’s invitation”, says John Schertow, IC‘s Founder and Editor-in-Chief. “She wrote a couple articles for us in the past, and I was already well-acquainted with her work as a scholar and a journalist through Al Jazeera and Upside Down World. Needless to say, I welcomed the opportunity to work with her on an ongoing basis”.

Manuela’s term at IC will continue for six months thanks to the generous support of The Association of Maya Lawyers (Nim Ajpu), The Women’s Association for the Development of Sacatépequez (AFEDES) and ProtectDefenders.eu.

“The case of Manuela is representative of the dangers defenders are confronted with when implementing their peaceful work and making their voice heard and it is essential that they benefit from support when facing this kind of situation,” says Gerald Staberock, Chair of the board of ProtectDefenders.eu and Secretary General of OMCT, one of the 12 organizations of the consortium implementing the project with the support of the European Union. “ProtectDefenders.eu started operating in October 2015 and our main aim is to protect Human Rights defenders at risk. Protection measures we can provide range from material support up to training and advocacy activities to raise awareness about the deteriorating situation of defenders worldwide.”

“Manuela’s experience in Ecuador is indeed a microcosm of the hardships that journalists and defenders face around the world.  Because of the specific nature of their work, these individuals are targeted with alarming regularly. They face deportation, arrest and imprisonment, strategic lawsuits against public participation (SLAPPs), defamation campaigns and various other forms of calculated violence and intimidation,” says John.

“We understand that the state corresponds to a specific economic system and criminalizes those who question it,” says Juan Castro from The Association of Maya Lawyers.

Those among us with the courage to stand on the frontlines and the will to keep us informed may also be disappeared or killed. According to Global Witness, 908 environmental defenders were killed between 1992 and 2012. The Committee to Protect Journalists, meanwhile, reports that 913 journalists were murdered in that same time frame. And the numbers are only rising, as we are reminded with the recent tragic loss of Berta Cáceres.

This a crisis that IC takes seriously. “It’s our job at IC to cover the frontlines, so we have to be acutely aware of potential risks not only to the journalists and defenders we work with, but also the individuals, communities and nations that we cover in our stories. Our uncompromising ethical position demands it,” says John.

“After all, words have power. When used correctly, that power can save an ecosystem, topple a corrupt regime, or inspire an entire generation of future defenders. We must protect that,” he adds.