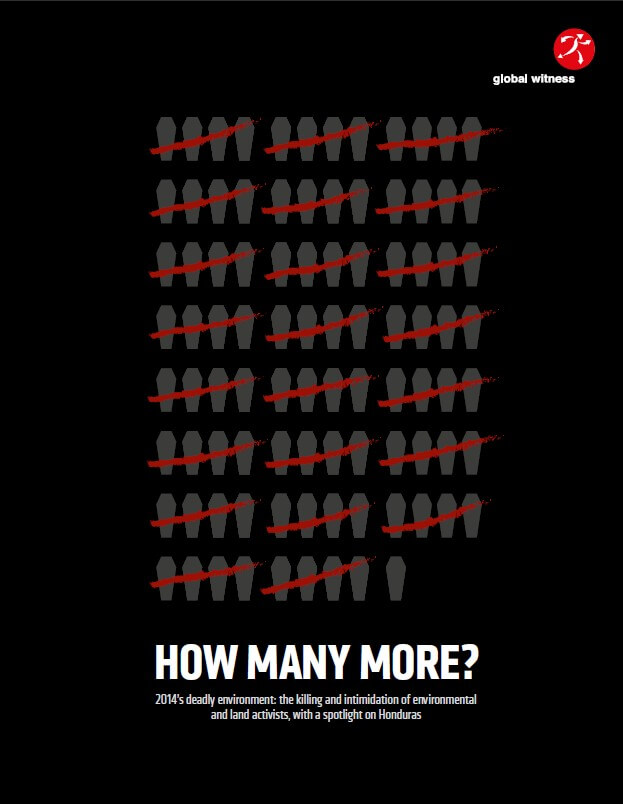 Killings of land and environmental activists in 2014 reached an average of more than two a week, a new Global Witness report reveals – an increase of 20% from 2013. How Many More? documents 116 known deaths worldwide last year – almost double the number of journalists killed in the same period.(1) Severe limits on information means the actual figures are undoubtedly higher.

Nearly three-quarters of killings occurred in Central and South America, with South East Asia second worst-hit. Honduras was the most dangerous country per capita to be an environmental and land activist. Worldwide, a shocking 40 % of victims were indigenous, with hydropower, mining and agri-business the key drivers of deaths.

How Many More? analyses trends in violence and intimidation in countries where the systematic targeting of land and environmental defenders is being accompanied by moves to criminalize protest, restrict freedoms, and dilute laws on environmental protection. In a disturbing trend, some governments have used counter-terrorism legislation to target activists, portraying them as enemies of the state.

You can download the report How Many More? in its entirety at GlobalWitness.org

Global Witness is calling on governments and the international community to monitor, investigate and punish these crimes, and for Honduras to address abuses in the upcoming review of its human rights record at the UN Human Rights Council.

“In Honduras and across the world environmental defenders are being shot dead in broad daylight, kidnapped, threatened, or tried as terrorists for standing in the way of so-called ‘development’,” said Billy Kyte, campaigner at Global Witness. “The true authors of these crimes – a powerful nexus of corporate and state interests – are escaping unpunished. Urgent action is needed to protect citizens and bring perpetrators to justice.”

Honduras suffered 111 killings between 2002 and 2014. The case of indigenous activist Berta Cáceres – winner of the 2015 Goldman Environmental Prize (2) – is emblematic of the systematic targeting of defenders in Honduras.

“They follow me. They threaten to kill me, to kidnap me, they threaten my family. That is what we face,” said Cáceres. Since 2013, three of her colleagues have been killed for resisting the Agua Zarca hydro-dam on the Gualcarque River, which threatens to cut off a vital water source for hundreds of indigenous Lenca people.

The key findings of How Many More? include:

This hidden crisis is escaping public attention, both because it is not being adequately monitored and because many defenders live in remote, poor communities with limited access to communications and the media. Scant data on killings in much of Africa and areas like China, Central Asia and the Middle East may be linked to poor civil society monitoring, and the suppression of media and other information outlets.

As the world turns its attention to the most significant climate talks in years – the 2015 UN climate conference in Paris, aimed at reaching a global deal on carbon emissions – How Many More? highlights a grave paradox in the climate negotiations. The people on the frontline of the battle to protect our environment are being murdered.

“Environmental defenders are fighting to protect our climate against ever-increasing odds,” said Billy Kyte. “Now more than ever we need to start holding governments and companies to account for the rising death toll on our environmental frontiers. The secrecy around how natural resource deals are made fuels violence and must end. It’s time for the international community to stand up and take notice.”