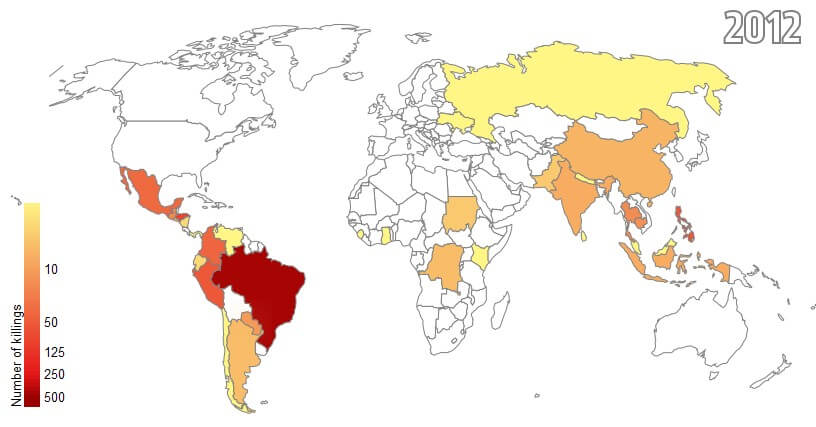 In 1992, when U.S. President George H.W. Bush’s White House staff David Macintosh spoke to the national Wise Use conference to congratulate American industrial leaders for their movement’s success at intimidating environmental activists, it was a harbinger of things to come. Two years later, armed militias recruited by Wise Use agent provocateurs were making death threats against environmental policy advocates like Audubon Society members. This became such a problem, that a Congressional hearing was held to look into Wise Use Movement intimidation and violence as a component of domestic terrorism.

While these killings designed to silence environmental activism and deprive citizens of the right to know about government and corporate corruption happened mostly in Central and South America, as well as Asia, they are only the confirmed killings. In Africa, some countries are too dangerous to attempt confirmation.

As noted by Global Witness in its report Deadly Environment: The Dramatic Rise in Killings of Environmental and Land Defenders, this crisis was noted in 2012 by the UN High Commissioner for Human Rights as particularly threatening to Indigenous peoples, stating that, “a number of cases involve state security forces, often in collaboration with corporations.”

As reported at IC in 2013, anti-Indian organizations associated with the Wise Use Movement launched a national campaign to terminate Indian tribes in the US. Working with local Tea Party activists, Citizens Equal Rights Alliance held regional conferences to build resentment against American Indian environmentalism exercised through tribal jurisdiction over treaty-protected natural resources.

The Pacific Northwest region CERA conference was organized by Wise Use agent provocateur Skip Richards, who was featured in a 1992 CBS 60 Minutes segment on the violence of the industry-backed Wise Use Movement. Political violence, fomented by provocateurs like Richards, is aimed at intimidating opponents, in order to take over or influence public policy. That violence includes malicious harassment, death threats, vandalism, arson, assault, and attempted murder.

As the fossil fuel export war between Wall Street and Coast Salish First Nations in Washington and British Columbia escalates, Wise Use terrorism can be expected to reemerge. Exposes like What Would Corporations Do? Native American Rights and the Gateway Pacific Terminal by Sandra Robson help to keep this terrorism in check.