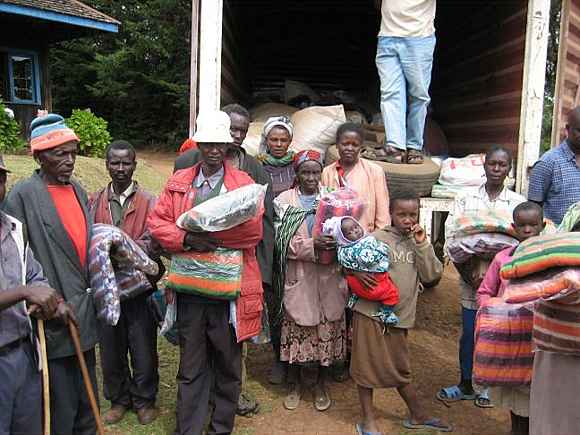 Emergency Support needed for the Ogiek

Unless the international community can pressure Kenya to respect Indigenous Rights, in the coming month (September) as many as 20,000 Ogiek People will be evicted from their traditional lands in the Mau Forest.

AUGUST 14:Yesterday, President Kibaki ordered everyone to be arrested, telling MP’s to “stop whining” about the eviction. “The government shall take action against people who destroy forests. Such people should not be spared at all, they should be arrested and charged with immediate effect,” President Kibaki said.

It should be understood that this is not simply about “protecting the forests.” If it was, then why would the government hand out massive allotments of land to various friends and relatives (including logging companies) in the same week the eviction was ordered? It is more about controlling the forest and the water.

Emergency Support needed for the Ogiek

Kenyan Prime Minister Raila Odinga announced on July 29, that every single Ogiek will be evicted from the Mau Forest, in the name of “conservation.” Giving them until mid-September, Odinga said they have one chance to voluntarily abandon their homes. If they don’t leave, they will be arrested.

Survival International reports that police forces have already been stationed around the forest “in preparation” for the eviction.

Survival continues, “the Ogiek are resisting the move. Representatives met with the Kenyan private secretary of Environment earlier this week in a bid to dissuade him from evicting the Ogiek, who say no amount of compensation will undo the damage to their communities if they are forced to move.”

However, it doesn’t appear likely that the Ogiek will be able to overturn the eviction order unless the international community steps in for support.

This is in large part due to the government’s infatuation with the Mau Taskforce report, which explicitly recommends the Ogiek’s eviction without any form of compensation. The report, which failed to identify boundaries and overlooked the government’s obligation to consult the Ogiek, as defined by the UN Declaration on the Rights of Indigenous Peoples, also attempts to invalidate a series of land titles that were granted to members of the Ogiek community in the 1990s.

This isn’t the first time the Ogiek have faced eviction.The government has repeatedly tried to kick them out “since colonial times”—almost always “on the pretext that they are degrading it,” Survival adds.

Resisting, the Ogiek have consistently maintained that it is in fact “the logging companies, and the more recent illegal settlers, who are causing the damage.”

Incidentally, in the same week that eviction was announced, the government gave 49 companies and individuals allotments of land in the Mau forest.

Business masquerading as stewardship at the expense of those who actually take care of the land. Business as usual.

As committed as the Ogiek are to defending their rights as Indigenous People, who’ve lived in the Mau forests for centuries, they won’t be able to overturn the eviction without our help.

The Ogiek know this, and so they’ve asked for friends and allies to rise up in solidarity, to “agitate for Ogiek rights in the Mau Forest.”

As a starting point, please write protest letters and petitions to::