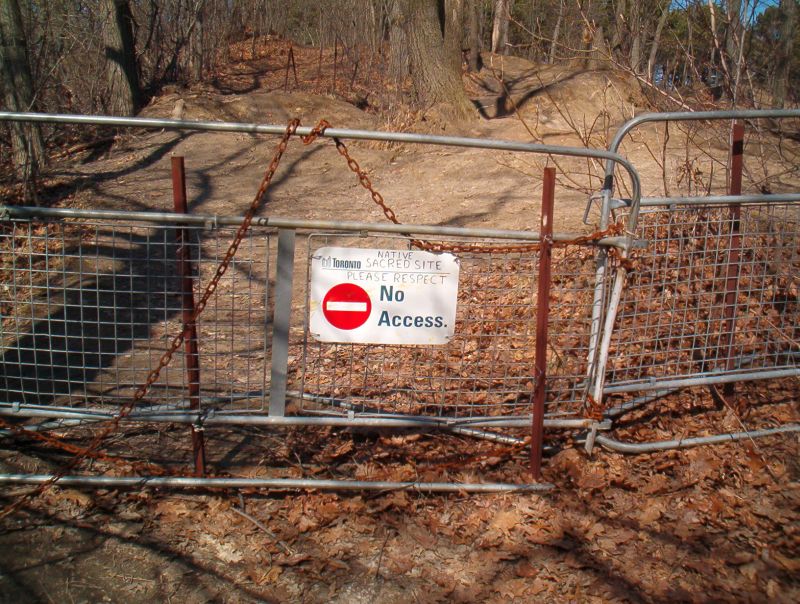 Toronto’s High Park, located near the edge of Lake Ontario, is home to more than four dozen Haudenosaunee burial mounds, some of which could date back 3000 years, making them older than Haudenosaunee Confederacy. Today, some of those burial mounds are being casually desecrated with the implicit sanction of Toronto’s City Council.

Roughly 4,200 kilometres away from Vallejo, California, where Indigenous Peoples have gathered to prevent a sacred burial ground from being converted into a public park, members of the Haudenosaunee Nation are speaking out against the continued desecration of burial mounds within Toronto’s largest park area.

“The territory that is now known as High Park was home to an Iroquoian people known as the Erie/Neutrals , ancestral to Meadowood Complex, who, over the course of the Woodland Period (1000 bce – 1614 ce) built earthwork mounds for honouring and burying their dead,” explains the Taiaiako’n Historical Preservation Society (THPS).

“The Six Nations are the custodians of the burial mounds… When John Howard bequeathed the park to the city [in the 1800’s] he also provided the condition that the Six Nations would continue their custodian role over their sacred sites. It is their duty to maintain the mounds and connection with the ancestors for future generations.” Led by Rastia’ta’non:ha from the Seneca Wolf Clan, THPS was founded to carry out this duty.

Unlike Glen Cove, which has not yet been desecrated, for years the burial mounds in High Park have been stepped on, dug out, driven over with bikes and just simply ignored.
THPS says that “No fewer than fifty-seven such mounds have been identified, and yet they are generally overlooked and unknown. Worst yet, these significant archaeological sites are being desecrated by some. One site, Snake (or Serpent) Mound, has been almost totally destroyed due to off-road BMX enthusiasts, who have actually dug up the mounds and installed ramps to make a dirt jumping course at the south-eastern corner of the park.” 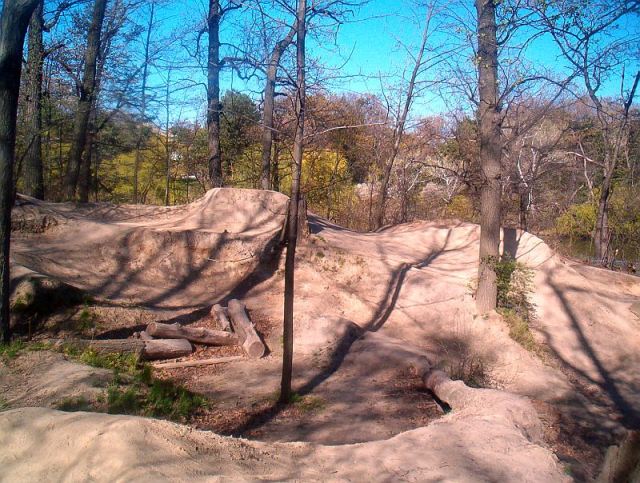 An off road bike jump course at the on the Snake/Serpent Mound. Photo THPS

“Determined efforts to reason with the perpetrators have so far proven unproductive, and repeated attempts to engage the Park Board and City Hall to intercede on this issue have been met with puzzling indifference,” THPS adds.

The City Council continues to ignore valid archaeological evidence along with historical facts and claims by the Haudenosaunee. They have also refused to apply any of their own by-laws concerning the construction of ramps (video) and use of bicycles within the park and dismissed requests (pdf) from the High Park Community Advisory Council (HPCAC) to meet with their representatives. Among other concerns, the government has also used apparently unlicensed archaeological consultants.

Despite the veritable stone wall they’ve been pushing against to secure the ancient mounds, THPS clearly has no intention of giving up. In fact, after ten years of diligence, their effort is finally getting public support. Most recently, on April 18, THPS held a public event with Friends of Snake Mound welcoming Onondaga Chief Chief Arnie General and a group of Clanmothers and Faithkeepers to discuss the issue. They are also now preparing for a public gathering at Snake Mound on May 1, 2011 to answer questions and discuss a strategy specifically for Snake Mound. 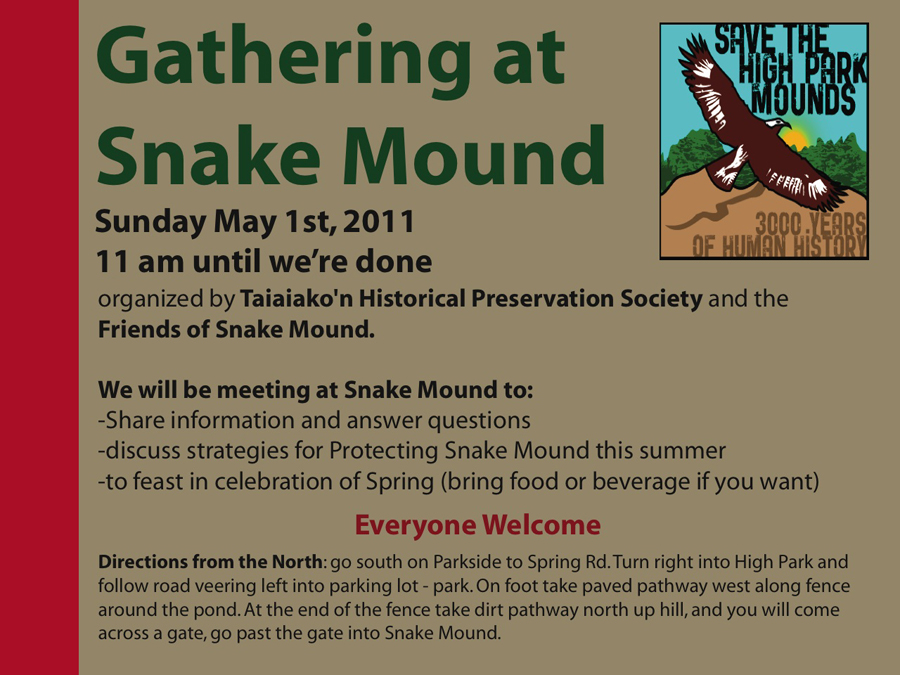 Tell the City of Toronto to Do it’s Job!