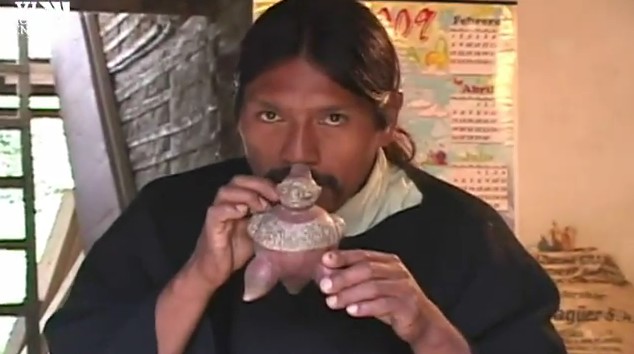 Indigenous people defend their traditional approach to justice in Colombia. However this indigenous justice is often at odds with the law as laid down by the government. Produced by the VJ Movement

In its analysis of the Inter-American Commission on Human Rights’ thematic hearing on indigenous jurisdiction and human rights, March 2011, the University Washington College of Law’s publication, Human Rights Brief, points out that, states in Latin America have historically denied indigenous jurisdiction unless “…it was useful to the colonizers, such as the ‘cacique system.’ In the 19th century, no Latin American constitution allowed for indigenous legal systems. In the 1980s, Latin American states began to recognize multi-culturalism in their constitutions, but not legal pluralism. However, a new model began to emerge in the 1990s in which all Andean nations except Chile began to recognize not only the leaders of indigenous communities but their jurisdictional roles as well.”

For instance, Article 7 of the Constitution of Colombia proclaims that the State “recognizes and protects the ethnic and cultural diversity of the Colombian Nation;” while Article 287 grants all territorial entities in the country, including indigenous territories, the rights to autonomy and self-government, and to collect and administer financial resources and benefit from the national income; and Article 246 of Constitution, permits indigenous authorities to apply their own law within their own territories.

The Nasa’s system of conflict resolution is a popular example of Indigenous Justice in Latin America. As Kimberly Inksater observes in her paper, Resolving Tensions between Indigenous Law and Human Rights Norms through Transformative Juricultural Pluralism, “The Nasa use a combination of criminal sanctions to restore harmony in the community and ensure the rehabilitation of the individual. Sanctions for what would be considered criminal offences include compensation to the victim’s family, fines paid to the Council, lashings and community labour.” Banishment may also be used, either to give an individual time to reflect on his or her actions or, in extreme cases, to permanently remove an individual from the community.

Stocks, first used by the Spanish on both Indigenous Peoples and slaves, are also sometimes used for more serious offences, including rape, homicide, the sale of land, and in some communities, theft. However, as The VJ Movement notes in this video, Colombian Indigenous Community Defends Code of Justice, stocks have been installed in every indigenous reservation “as a symbol of contemporary justice.”

Lashing was similarly introduced by the Spanish; though it, too, has taken on symbolic meaning for the Nasa. As Inksater observes, “The whip is [now] considered to symbolize lightning, which is a mediating force between lightness and darkness.”

Outside of Nasa jurisdiction, lashings, stocks, community labour and banishment are all considered to violate human rights norms. However, because self-governance and jurisdiction are identified in Colombia’s constitution as well as ILO Convention 169 (and to a lesser extent, UNDRIP), those norms may not be readily applied to the Nasa.

Both ILO 169 and UNDRIP acknowledge that Colonial states have an obligation to recognize and respect the unique customs, laws and juridical systems of Indigenous Peoples, even if they are not compatible with the fundamental laws and rights of the state.

But even so, the issue of jurisdiction (legal pluralism) in Colombia and the rest of the Americas is still very much unresolved. As the Human Rights Brief notes, “[the advances which began in the 1980s] are [increasingly] being challenged in the Andean nations as indigenous leaders often have charges brought against them for exercising indigenous jurisdiction. Commissioners Dinah Shelton (president); Rodrigo Escobar; Paulo Sergio Pinhiero heard the stories of two Andean indigenous leaders who have had charges brought against them in national courts for carrying out indigenous justice.” There is an endless stream of examples.

In fact, the matter of jurisdiction is the essential challenge of all Indigenous Peoples. Modern states still cling to an archaic mythology that prevents them from respecting indigenous jurisdiction in an unconditional sense. The challenge, then, is to confront that mythology and encourage Nation States to become politically mature enough to work with us. At the same time, we have to exercise our own rights and resist any colonial infringements that undermine them. If we do not, thatn we are diminished and made increasingly vulnerable until one day, we cease to exist.