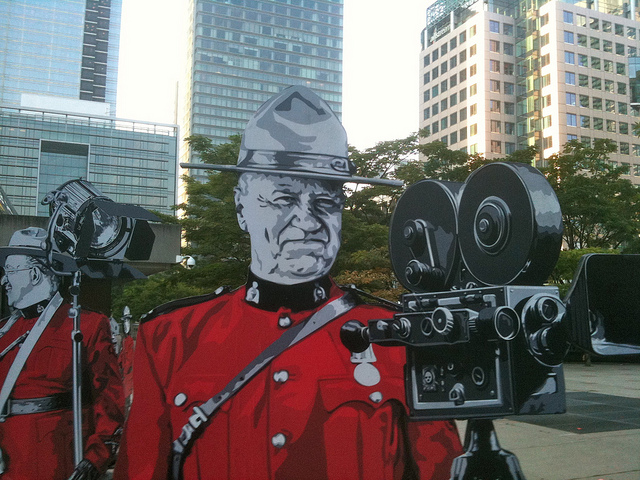 Photo by pigdump, on Flickr. Some Rights Reserved
Support our journalism. Become a Patron!

Defenders of the Land (DotL) this week condemned the Harper government for using police to spy on First Nations instead of addressing Canada’s continued violation of Indigenous Peoples’ rights. Adding insult to injury, DotL indicates that the surveillance is being shared with private industry.

Below: a press release from DotL; relevant documents from INAC and the RCMP.

Unceded Algonquin Territory/Ottawa, December 6, 2011—The Defenders of the Land (DotL), a network of Indigenous Communities, today condemned reports that in 2007, the Harper government established a national and international police surveillance network to spy on Indigenous Peoples and their supporters for defending Indigenous Peoples’ self-determination and land rights. The RCMP surveillance operation shared its findings with private industry.

Arthur Manuel, spokesperson for DotL said today “Many of the so-called ‘communities of concern’ identified in the recently disclosed RCMP documents are members of our network. They are not extremists or terrorists. All of their protests or political actions were in defense of their constitutionally recognized and internationally affirmed right of self-determination and land rights as Indigenous Peoples. These documents show that the federal government cares only about extracting wealth from Indigenous lands, and will criminalize Indigenous Peoples who are protecting their lands and livelihoods from destruction. While governments are taking hundreds of millions of dollars in resource monies out of Indigenous communities like Attawapiskat, they are underfunding those same communities to the point of destitution and disease. As in Attawapiskat, those who speak out are blamed and punished.”

Norman Matchewan, a spokesperson for the Algonquins of Barriere Lake said, “both Canada and Quebec have been not only spying on us as these documents confirm, but these two governments are coordinating the political use of the police to criminalize our people. As in Attawapiskat, the federal government imposed Third Party Management on our community, to bury signed agreements between our Customary Chief and Council and Canada and Quebec. These agreements were intended to improve living conditions in our community through co-management and revenue resource sharing. Rather than deal with outstanding land issues, then the federal government extinguished our right to self-determination in 2010 by forcing our community into the Indian Act elective system with the support of only 10 members in our community. The surveillance of our community directly reflects the lucrative natural resources that the governments wish to access on our lands. By criminalizing our defense of our lands, they demonstrate their intent to exploit the territory without community consent.”

Mireille Lapointe, past Chief of the Ardoch Algonquins said “these documents show that we were under police surveillance because we were protecting our lands and people from the potential development of a uranium mine on our traditional territory, a project that we were not meaningfully consulted about, despite the Supreme Court of Canada’s 2004, decision in the Haida case, which clarified the Crown’s duty to consult with Aboriginal Peoples.”

Mel Bazil, Co-Founder of the Lhe Lin Liyin of the Wet’suwet’en people said ”what these RCMP documents show is that the Harper government doesn’t respect the international standard that before developments can take place on Indigenous Peoples territories, their free, prior, and informed consent must be obtained. If this international standard were respected and implemented on the part of governments, law enforcement and industry, Indigenous Peoples response to proposed development would probably not escalate to the point where protests and blockades are felt to be necessary by the affected Indigenous Peoples.”

Arthur Manuel, DotL spokesperson stated “the RCMP can change the name of the unit keeping Indigenous Peoples under surveillance, but until the Harper government respects the constitutionally protected and internationally recognized Aboriginal Title & Rights and Treaty Rights of Indigenous Peoples in Canada, then Indigenous Peoples are justified in using political action in protecting and defending their right to self-determination and their rights to their respective traditional territories. We are encouraging grassroots peoples to mobilize and defend themselves and their lands from bad agreements involving their lands and resources, which do not meet the standards of constitutional and international law.”