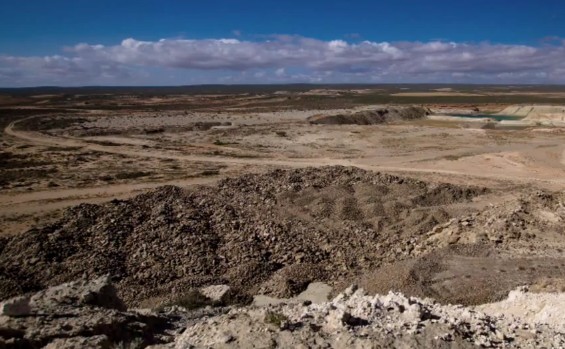 "Halt the sale of De Beers operations until they fix our area", says Cape West Coast community
Support our journalism. Become a Patron!

Hondeklipbaai, a small community located on northwest coast of South Africa, is trying to stop the world’s largest diamond mining company, De Beers, from getting out of its promise to rehabilitate the land it has exploited for almost 80 years.

De Beers is trying to sell the mine to a consortium led by Trans Hex Diamonds. However, the community of Hondeklipbaai says Trans Hex simply doesn’t have the financial clout to carry out a rehabilitation programme of this magnitude.

South Africa’s Department of Mineral Resources (DMR) is expected to make a decision on the transfer and an amended environmental management programme, in the next few weeks. The community is asking the DMR to postpone its decision, especially in light of their ongoing land claim against De Beers.

“We make an urgent call on the DMR to hold these companies to account and to not forget the communities that are directly affected. Too often big mining companies exploit the country’s natural resources without undoing the damage they cause”, said Hondeklipbaai community leader David Markus.

Commenting on the land claim, Markus stated earlier this year, “You can’t sell a house that is not yours… We are saying that De Beers must first sort out the problems in their house before they sell to a third party. They can’t go and sell the land if we are having a claim there.”

In addition to approaching the DMR, the community has launched an awareness campaign with the support of Benchmarks South Africa. At the center of the campaign is a two-minute film which shows the damage De Beers has caused to the community’s land, about 300 kms outside of Cape Town.

During the film, Markus declares: “We are still living in dire poverty. De Beers says ‘a diamond is for ever’. The reality here is that our suffering is for ever”.

Even though the community is heavily impoverished, that statement goes far beyond any financial issues. The Namaqualand mine is located within the Succulent Karoo biodiversity hotspot, one of 34 regions in the world which contain at least 1 percent of the world’s total plant species.

After 80 years of exploitation, the mine area today looks more like a desert wasteland.

The “alternate land use” plans that De Beers proposed earlier this year, brings the point home even further. The company has suggested that the now mined-out land could be used as a hazardous waste site and a prison.

To show your support for Hondeklipbaai, please send the following letter to South Africa’s Minister of Mineral Resources. If you wish to state your position more firmly, please feel free to modify letter.

Hold DeBeers Accountable for Legacy at Namaqualand Mine

I am writing to ask you to ensure that the Constitutional rights of the communities living around the De Beers Namaqualand Mine to a safe and healthy environment are upheld and that an equitable contribution to their livelihoods is provided in recognition of the 100 years of mining in the area. De Beers’ claim that the sale is part of their commitment to a “lasting contribution to the communities in which they live and work” is unsubstantiated given their lack of disclosure and meaningful engagement with key stakeholders in the process of selling the mine.

In the interest of establishing a just outcome in Namaqualand, setting a national precedent for mineral right transfers and local community interests, and a global statement about South Africa’s commitment to human rights and social development, I ask you to recognise the rights of those representing the environment, and the rights of the communities of Namaqualand to have a voice in the process of proposed amendment of the rehabilitation obligations and proposed transfer of mining rights. To this end, I ask you to ensure full disclosure by De Beers, the purchaser of the Namaqualand Mine and the Department of Mineral Resources, and ensure a proper opportunity for affected parties to give inputs.

I specifically ask that, in your consideration of DeBeers’ proposed amended Social and Labour Plan and proposed amended Environmental Management Programme, you will bear in mind the long-term sustainable development requirements in the region and ensure that an adequate plan and financial provision for implementing that plan are in place.