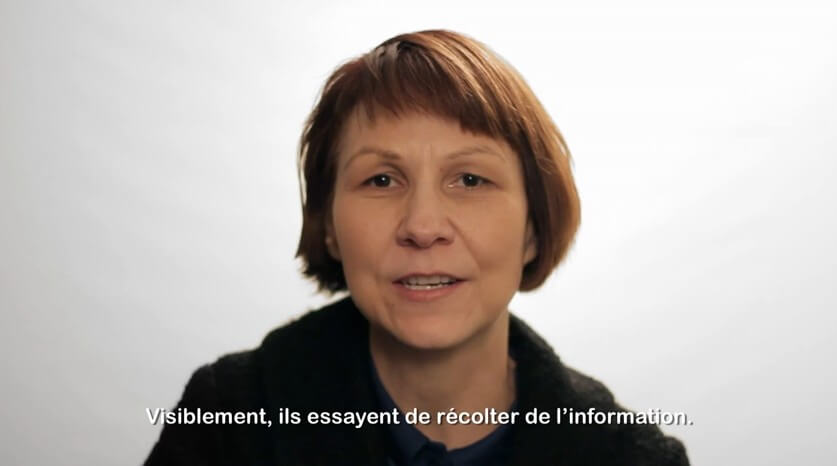 This video is part of a bilingual series of 10 short interviews on the state of democratic rights and dissent in Canada, as part of Voices-Voix coalition’s documentation efforts.

In this video, Cindy Blackstock, the Executive Director of The First Nations Child and Family Caring Society discusses her case as a “person of interest”.

Produced: Thanks to the support of the Ken and Debbie Rubin Foundation
Directed and edited: Jericho Jeudy
Voice-over: Arij Riahi
Coordination: Aurore Fauret
Many thanks to Steve Smith and Ulker Gurun

Below, Voices-Voix coalition examines the case against Blackstock. Information provided under a Creative Commons license.

After Blackstock’s organization filed a discrimination complaint against Indian and Northern Affairs Canada, she was excluded from important meetings, and she claims that government employees systematically monitored her professional and personal life. Although the Privacy Commissioner found that the government’s surveillance of Blackstock violated the Privacy Act, the government refuses to make a legally binding undertaking to cease such activity.

The complaint alleged that AANDC funding for Aboriginal family services at the federal level is significantly less than funding for off-reserve children who receive the same services from provincial governments. In October 2008, the Commission referred this complaint to the Canadian Human Rights Tribunal for a hearing.

Blackstock alleges that, between 2008 and 2009, AANDC officials barred her from meetings between AANDC and other Aboriginal leaders. She believes that this exclusion occurred as a form of retaliation in response to the Society’s human rights complaint.

For example, in December 2009, Blackstock was invited by the Chiefs of Ontario as a technical aid to attend a meeting at AANDC regarding child welfare funding in Ontario. Upon her arrival at the meeting, Blackstock alleges that an AANDC official refused to meet with the Chiefs of Ontario if Blackstock was present. She also alleges that the official stated that he was aware that she had some “issues” regarding child welfare, including a human rights complaint. Blackstock was made to wait outside of the meeting. Blackstock further alleges that another similar incident of exclusion occurred in 2008 and that this adverse treatment contrasts with the working relationship she had with AANDC prior to submitting the human rights complaint.

Having been barred from meetings and sensing animosity from AANDC, Blackstock was concerned that AANDC might retaliate against her in other ways in response to her organization’s human rights complaint against AANDC. As a result, she filed an Access to Information request to see what information the government had gathered about her between June 2009 and June 2011.

Blackstock received the requested documents in November 2011. They indicate that AANDC was systematically monitoring both her professional and her private life. First, that AANDC allegedly collected personal information from Blackstock’s personal Facebook page and from her Status Indian file, which also includes information about her family. Second, that AANDC assigned several federal officials to follow Blackstock in her professional activities. Officials attended 75 to 100 of her public speaking engagements on the state of Aboriginal children’s rights in Canada with the objective of reporting on Blackstock’s activities.

According to Blackstock, the internal reports about her activities, produced by AANDC officials and circulated within the Department, sometimes employed a mocking tone.

Blackstock also alleges that the products of these surveillance activities were shared with the Department of Justice legal team, charged with defending AANDC in the Society’s discrimination complaint.

On national radio, Blackstock asked Canadians to question which policies and services have been improved by AANDC’s systematic monitoring of her public and private activities, and why such a large investment of resources was dedicated to monitoring a citizen with no criminal record, whose single goal is to help secure the fair treatment of Aboriginal children.

In July 2013, officials from AANDC and the Department of Justice testified before the Canadian Human Rights Tribunal (CHRT). The evidence and arguments in the proceedings relating to the Society’s retaliation complaint were completed in August 2013. The final ruling will determine whether the monitoring of Blackstock and her personal Facebook page constitutes an action of retaliation contrary to the Canadian Human Rights Act.

Despite the May 2013 ruling of the Privacy Commissioner, in September 2013 the Department of Justice refused to provide an undertaking (a legally binding written commitment) that it would cease monitoring Blackstock’s Facebook page, stating that its actions were “appropriate.” Blackstock, whose organization is continuing to advance its complaint on behalf of First Nations children before the Tribunal, views the government’s response as a form of intimidation.

Note: For more detailed information on the legal case itself, click here.