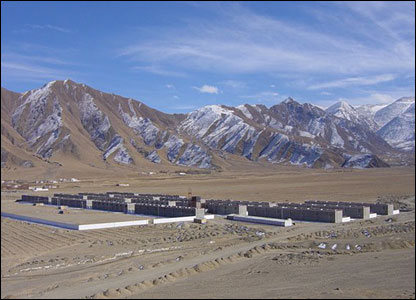 The re-settled village of Ne'u near Lhasa. Photo : International Campaign for Tibet
Support our journalism. Become a Patron!

Earlier this month, a US-based human rights group condemned the Chinese government’s recently-adopted plan to extinguish what remains of the nomadic way of life in Occupied Tibet, Inner Mongolia and the Xinjiang Uyghur Autonomous Region.

A May 30th statement posted on the official website of the Central People’s Government of the People’s Republic of China, outlines the bare essentials of the settlement plan. You can view that outline, roughly translated to English, by visiting the following link: Twelfth Five-Year Plan for the Project on Resettling Nomadic People within China.

Below, a report by Radio Free Asia, cross-posted from Mines and Communities.

5 June 2012 – Authorities point to ‘overgrazing’ but make way for mining and ‘unfair’ development.

A U.S.-based rights group has hit out at plans by the Chinese government to force three ethnic minority groups to abandon the last traces of their nomadic lifestyles in the next three years.

“The Chinese Government continues to aggressively pursue and expand its national project for displacing nomadic herders off their traditional lands and resettling them in agricultural and urban areas,” the Southern Mongolia Human Rights Information Center (SMHRIC) said in an e-mailed statement on Tuesday.

Citing a statement posted on the official website of China’s central government, the group said it marked “a major and seemingly final step toward eliminating the remaining population of nomad herders and eradicating the thousands of years-old nomadic way of life in China.”

SMHRIC, which campaigns for the rights of ethnic Mongols in China’s Inner Mongolia region, said the resettlement policies would affect nomadic herders in the troubled northwestern region of Xinjiang, Inner Mongolia, and Tibet.

It said the statement confirmed Beijing’s determination “to permanently end the nomadic way of life of these regions.”

“The Party Central Committee and the State Council have especially emphasized the socio-economic development of pastoral areas, bringing a remarkable improvement to the herders’ living conditions and mode of production, causing the majority of herders to be resettled in static locations,” the government announcement said.

SMHRIC said these policies violate China’s obligations under the United Nations Declaration on the Rights of Indigenous Peoples (UNDRIP).

According to the Declaration, “indigenous peoples shall not be forcibly removed from their lands or territories.”

Experts say that deep-seated cultural ties to the grasslands and traditional nomadic ways of life lay behind a wave of protests that swept across Inner Mongolia in May 2011.

Chinese authorities poured armed police and security forces into Inner Mongolia to contain protests sparked by the death of a herdsman from the Shiliin-Gol (in Chinese, Xilin Meng) region who was run over during clashes with mine company trucks.

Thousands of students were locked in campuses at major schools, colleges, and universities in the regional capital, Hohhot, following demonstrations by hundreds of ethnic minority Mongolians across the region.

Mongolian commentators said the protests reflect a deep and widespread anger over continuing exploitation of the region’s grasslands, the heartland of Mongol culture

Environmentalists point to large-scale environmental destruction in Inner Mongolian regions where mining is taking place, as well as to more subtle ecological pressures in other areas.

Open-cast, or strip, mining is one of the most environmentally destructive forms of mining, destroying the surface ecosystem over a wide area and releasing pollutants into the air.

Ethnic Mongolians, who make up almost 20 percent of Inner Mongolia’s 23 million population, complain of destruction and unfair development policies in the region, which is China’s largest producer of coal. The overwhelming majority of the residents are Han Chinese.

Ninety percent of China’s 400 million hectares (988 million acres) of grassland now show some degree of environmental degradation, according to official figures, and the government has pointed to over-grazing by nomads as a key contributing factor.

Last year, Beijing rolled out a slew of tax breaks and funding for enterprises in rural areas that implement environmentally friendly programs and technological innovations in the field.

But SMHRIC and other overseas campaigners have said that Chinese authorities and companies are continuing to exploit the grassland in spite of slogans like “grassland protection” and “economic growth.”