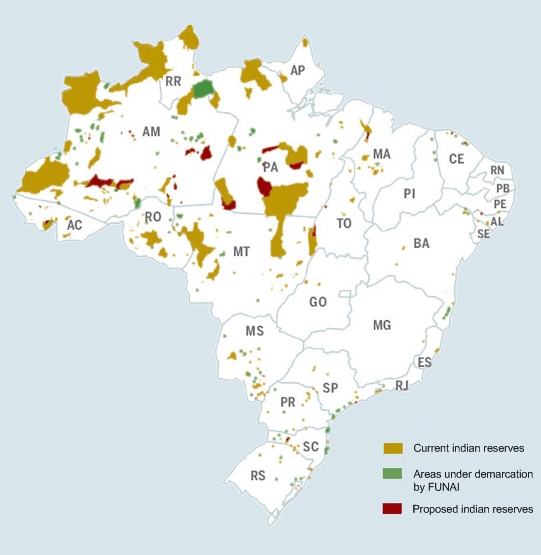 The move is an apparent response to concerns over “possible incursions by guerrilla fighters, drug traffickers and others,” notes a recent report by Reuters. However, it more so appears to be a follow-up to statements issued by General Augusto Heleno this past April.

During a seminar in Rio de Janeiro, General Heleno said the United Nations (UN) Declaration on the Rights of Indigenous Peoples gives room for indigenous people to cede from the state and adopt another nationality. That makes it a threat to ‘National Sovereignty.’

One month later, following a ceremony to commemorate the end of WW2, Brazil’s Defense Minister Nelson Jobim stated the military should be deployed because the State’s “territorial sovereignty is at risk,” says another report by Reuters.

“We want to be clear on something fundamental — Indian lands are Brazilian lands,” Jobim said. “There are no nations or Indian peoples, there are Brazilians who are Indians.”

Pointing to the ongoing land conflict between Indigenous Peoples and vigilante farmers in the northern state of Roraima, Reuters added that “at least one former Venezuelan army official entered the Roraima reservation to train gunmen, and a Venezuelan flag was raised on one farm, Indian leaders and media reported.”

Curiously, however, President da Silva dismissed this concern. Instead, he chose to praise indigenous people for their loyalty to the state. “Much of the Brazilian army is made up of Indians,” the President said. “How often have the Indians defended our borders?”

According to Saturino Xavante, a secretary with the Amazon umbrella group COIAB, indigenous people have been doing so for a long time. “In all these years we kept intruders out — and now we are a risk to national security?”

Then there’s the legality of occupying indigenous lands. Not only is it a violation of international agreements, but according to Claudio Luiz Beirao, a legal consultant to the Catholic Church’s Indigenous rights group, CIMI, it’s also against the law. “The constitution says only Indians can occupy indigenous lands unless Congress passes special legislation,” says Beirao — “and it didn’t.”

The worst past of all, however, is the fact that this occupation lays the groundwork for the indigenous peoples’ worst fear to become a reality: that the military will start taking their lands, influencing their cultures, terrifying them with surprise maneuvers, and raping their women — none of which is unprecedented.