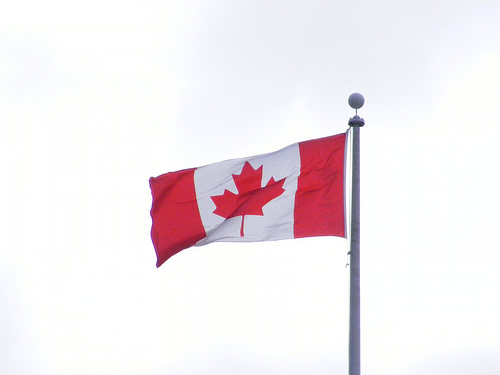 Following up last week’s announcement by the Canadian House of Commons which called on the Federal Government to implement the United Nations Declaration on the Rights of Indigenous Peoples, an announcement that had me believing pigs could fly, on Monday the (minority) government of Canada was kind enough to set the record straight.

Courtesy of Ben Powless, below you will find Canada’s official statement, followed by a response delivered the next day by Beverly Jacobs, President of NWAC, on behalf of the Indigenous Peoples Caucus of the Americas.

Photo by abdallahh,
republished here under a Creative Commons License

Canada has been an active participant in the negotiations of the draft American Declaration on the Rights of Indigenous Peoples since the process began in 1997. We have worked towards a strong, effective text that could provide practical guidance to States. The commitments that States undertake through this process should be ones that they are willing and able to assume. The record provided by the compendium of proposals over the years demonstrates the contributions we have made towards this goal.

At the last negotiating session, Canada proposed a new approach to finding common ground. Specifically, we proposed that the focus of the Working Group undergo a fundamental shift – a shift from negotiating specific text to exploring in detail the underlying issues through discussion of, among other things, relevant State and indigenous experiences, practices and polices. We underlined the fact that Canada could not accept the text of the United Nations Declaration on the Rights of Indigenous Peoples (A/RES/61/295) as the starting point or minimum outcome for further negotiations. We also made it clear that if true consensus was not our shared goal, then Canada would have to fundamentally review its participation in, and support for, future negotiations.

Regrettably, the negotiations of this Working Group continue to move in a direction that Canada cannot support. It has become clear that there is a strong desire among many OAS States and the Indigenous Caucus to use the United Nations Declaration on the Rights of Indigenous Peoples as the baseline or starting point for future negotiations on topics for which no consensus has been reached within this Working Group. However, the adoption of the United Nations Declaration was not universally supported by OAS Member States.

In the interest of allowing others to proceed with the negotiations of an OAS declaration, from this point forward, Canada will be playing a different role. We are formally reserving our position on the final text under negotiation. We will no longer actively negotiate or table text. We will, however, continue to be present and will occasionally speak about Canadian experience and perspectives.

It is not our intention to stand in the way of others moving in the direction they wish. If and when a final document emerges from this process, Canada will consider it carefully. If the final document does not adequately address Canada’s concerns, we will not be able to support it. However, in that case, Canada would not intend on blocking consensus, as long as the document adopted clearly indicated that Canada did not give its support and as long as there was an explicit understanding that the Declaration text therefore did not apply to Canada.

Regardless of our position on this process, Canada will continue to take effective action, at home and abroad, to promote and protect the rights of indigenous peoples based on our existing human rights obligations and commitments.

Response of the Indigenous Peoples’ Caucus of the Americas

The Indigenous Peoples’ Caucus kindly requests that the following Statement be included as part of the official record of this meeting.

The Organization of American States (OAS) is a vital regional agency committed to the Purposes and Principles of the United Nations. The Inter-American human rights system has a strong tradition and record of progressive action in relation to the promotion and protection of human rights. Indigenous peoples in the Americas have repeatedly reaffirmed their support for the OAS. This Working Group was created by the OAS General Assembly and its mandate and process must be respected by all participants.

In a historic vote on September 13, 2007, the UN General Assembly overwhelmingly adopted the UN Declaration on the Rights of Indigenous Peoples. Of the 35 States in the Americas, only Canada and the United States voted against.

The UN Declaration is a universal human rights instrument. Article 43 affirms that the “rights recognized herein constitute the minimum standards for the survival, dignity and well-being of the indigenous peoples of the world”. This Article was accepted for provisional adoption by all States and Indigenous peoples in the UN standard-setting process, including Canada and the United States.

At the OAS Meeting of Reflection in November 2007 in Washington, D.C., Canada stated that the “Government of Canada cannot accept the UN Declaration text as the starting point or minimum outcome for these negotiations [on a draft American Declaration]. Trying to impose the UN Declaration text will doom these negotiations to failure.” Notwithstanding this statement, most other American States at the November Meeting chose to reaffirm their international commitments and take further consistent steps in negotiating a draft American Declaration.

In its April 14, 2008 Statement to the Working Group, Canada expressed a similar objection. Canada went further, however, and indicated that it would attempt to block consensus, unless the following two conditions were met: “the document adopted clearly indicated that Canada did not give its support” and the Declaration included “an explicit understanding that the Declaration text therefore did not apply to Canada.”

These conditions are inconsistent with the rule of law, international practice and domestic precedent within Canada and are, therefore, inappropriate, unacceptable and discriminatory. In interpreting human rights, Canadian courts are free to invoke and often rely upon a wide range of international instruments, including declarations. In effect, Canada is requesting the OAS to alter the rule of law within a member State.

In addition, Canada is seeking to create a dangerous precedent within the OAS. That is, any State that chooses to oppose the adoption of any declaration within the Inter-American system could simply opt to oppose it and prevent its domestic application. This would severely undermine the principle of international cooperation that is a crucial element of the UN Charter and the OAS Charter. It would also undermine the progressive development of human rights within the Hemisphere.

Within the OAS, the quest for consensus is the preferred course of action. However, consensus cannot be used as a veto by any member State to insist on regressive measures. It would be an abuse for a State to prevent consensus on a draft American Declaration, in an attempt to compel other States to abandon their solemn commitments in upholding the “minimum standards” in the UN Declaration.

Notably, the minority government of Canada is defying a Motion adopted on April 8, 2008 in the Canadian Parliament. This Motion states:

That the government endorse the United Nations Declaration on the Rights of Indigenous Peoples as adopted by the United Nations General Assembly on 13 September 2007 and that Parliament and Government of Canada fully implement the standards contained therein.

We respectfully urge the OAS and its member States to reject the undemocratic actions of the Canadian government. As affirmed in the Inter-American Democratic Charter: “The peoples of the Americas have a right to democracy and their governments have an obligation to promote and defend it.”

The Indigenous Peoples’ Caucus also notes that the United States’ position has deteriorated from the general reservation which it took at the tenth negotiation session in April 2007 in Bolivia. The US indicated there that it would later inform the Working Group whether the US could accept the results of that session. This was never done.

Today, the United States made a statement on the floor that it would “not join in any text that might be approved or otherwise appear in the Chair’s rolling text” as a result of this 11th negotiation session and it would reserve its position on the final text. The refusal of the United States to constructively engage in this negotiations process violates its duty to consult with sovereign Indigenous nations and to uphold its obligations under treaties it has made with Indigenous nations.

The Indigenous Peoples’ Caucus of the Americas regrets that Canada and the United States are continuing to disrespect this process and the human rights of Indigenous peoples, which places what we have achieved to date in this process at great risk. These two States with their positions of “reservations” constitute a pre-emptive veto on the consensus that we are building with the great majority of States and representatives of Indigenous peoples for a draft American Declaration that is consistent with the UN Declaration on the Rights of Indigenous Peoples.

The Indigenous peoples participating in this process call upon Canada and the United States to withdraw their reservations, to not block consensus, and adopt a constructive attitude to ensure the timely adoption of the American Declaration that reflects in a true and effective manner our human rights. They must respect the principles of international cooperation and solidarity that underlie the Organization of American States.

We look forward to working with all States and adopt a strong and effective Declaration that responds to the aspirations and needs of the Indigenous peoples of the Americas.