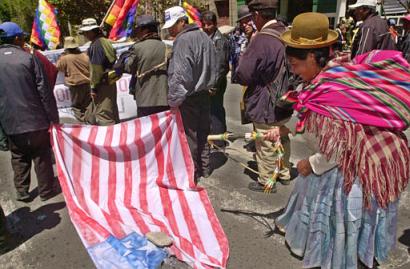 Impunity Watch has just published a report confirming that right-wing opposition groups in Bolivia have been receiving US Tax Dollars.

According to the report, the US quietly led a “USAID political party reform project” that ultimately sought to strengthen the opposition so that they could “serve as a counterweight” to the so-called “radical” MAS (Movimiento al Socialismo) party, currently led by President Evo Morales.

As you may recall, this ‘counterweight’ was behind the September 11, 2008 Massacre in Porvenir and the wave of violence that surrounded it.

See below for the full report, or read it on the impunity watch website.

LA PAZ, Bolivia – Bolivian opposition has been receiving US Tax dollars with the purpose of serving the interests of the United States in the southern hemisphere. Mark Weisbrot, Co-Director of the Center for Economic and Policy Research, said that Washington has kept its ties to the Bolivian Opposition in Secrecy.

A declassified message from the U.S. embassy in Bolivia to Washington from July 2002 said, “A planned USAID political party reform project aims at implementing an existing Bolivian law that would … over the long run, help build moderate, pro-democracy political parties that can serve as a counterweight to the radical MAS or its successors.”

Jeremy Bigwood, independent researcher and journalist has made five different attempts since 2005, to find details about the US spending in Bolivia under the Freedom of Information Act, without success.

Another petition revealed that the National Endowment for Democracy (NED) brought 13 “emerging leaders” from Bolivia between 2002, and 2004 to strengthen their right-wing political parties. NED, also provided over US$ 128,825 to the Chamber of Industry, Commerce, Services and Turism of Santa Cruz.

Santa Cruz is one of the main separatist cities in Bolivia, and the money was used to finance various seminars, that allegedly, developed a defense campaign for the social population to support separatist initiatives. Other seminaries were promoted by USAID and NED to promote separatism in the region.

The US ambassador Phillip Goldberg was considered “persona non grata” by the Bolivian government after accusing him of aiding right-wing opposition groups. These groups massacred a group of pro-Morales indigenous and peasants on September 11th this year. The Governor of Tarija, was arrested in connection to the massacre, and later, he admitted connection to the events.

The Union of South American Nations (UNASUR), has organized efforts to investigate further the events of the massacre. At the same time, the region is distancing from the US controlled Organization of American States.

The financial support sent to the opposition has fueled five out of Bolivia’s nine provinces against the democratically elected government of Evo Morales. The US, feels threatened by the Morale’s attempt to rewrite the country’s constitution, while bringing economic and social reforms in favor of the majority of the Bolivians and indigenous.

Over the last months, reports have announced disappearances and killings of government supporters in the right-wing controlled opposition provinces. Jeremy Bigwood, further argued that the techniques used by the US Department of State with USAID and NED were also used in Vietnam, where the tribe Hmong received financial support that only destroyed their way of live, without changing the regime.

“USAID is not supposed to be a clandestine organisation,” said Weisbrot. “But by providing clandestine aid to opposition groups, it gives the impression that the U.S. is contributing to efforts to destabilize the Bolivian government.” The US might be crossing a blurry line defining state sponsored terrorism.