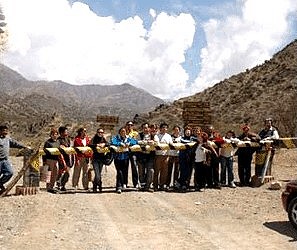 On April 14, a group of Argentine government officials and employees of Barrick Gold Corporation, carried out a violent assault against Women at the Famatina mining camp in the province of La Rioja, where a road blockade has stood for the past two years.

When the officials arrived, a group of Women from the “Self-Organized (Autoconvocados) Neighbors of Famatina for Life,” gathered at site and lowered a metal bar they installed to deny the company’s passage to the mine site.

The officials and Barrick employees then began to ram their trucks against the barrier, but “without any success,” explains an April 14 media alert.

The officials then exited their vehicles and carried out a violent assault against a handful of women, who had peacefully sat down in front the vehicles – first shoving them, and then kicking and striking the women with their fists.

“When the women did not budge,” the Barrick and government officials decided to leave the mining camp, and set out to the Famatina police station masquerading as victims with a plan to file charges against the Women.

However, “upon entering the police station, the aggressors encountered Famatina residents who had been alerted to what was taking place,” the alert states. “The Barrick and government officials then continued to verbally assault the community members in an arrogant manner, self-assured of their impunity.”

“This attitude did not fall well upon the community: Practically the entire population of Famatina immediately turned out in force, and has gathered to surround the police station. As of this moment, the Barrick and mining officials are now ‘trapped’ inside, afraid to exit the police station.”

Police forces from the city of Chilecito have since been contacted to support the Famatina police and the agressors.

Further updates (in Spanish) will be posted at http://www.noalamina.org/