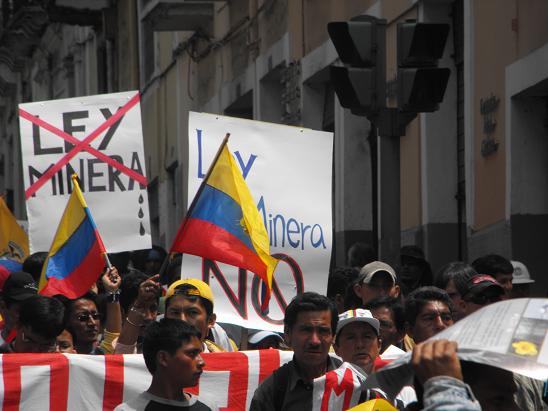 In Ecuador, more than 10,000 indigenous people mobilized last week to protest a new water law introduced by government of President Rafael Correa, which they say could lead to privatization, pollution and depletion of this most precious resource.

The protest took place on November 19, “two days after thousands of campesinos and coastal fishers staged nation wide protests and road blockades against Correa’s draft Mining Law and support for large-scale shrimp farms”, says Daniel Denvir, an independent journalist in Quito. “Activists contend that the law would allow companies to undertake damaging large-scale and open pit mining in ecologically sensitive areas, contaminating the water supply with heavy metals. Fishers demanded that Correa overturn Decree 1391, passed on October 15th, which handed thousands of marine hectares over to large-scale shrimp farmers. This will lead to the further destruction of mangrove forests, critical habitat for the area’s fish, crabs and conchs.”

During the protest, indigenous people converged on the Pan-American Highway, “blocking the country’s central artery for over six hours.”

For the Transformation of Ecuador

More importantly the protest marked the beginning a definitive change in Ecuador.

It was organized by CONAIE, the Confederation of Indigenous Nationalities of Ecuador, who has suffered many setbacks due to internal divisions and various political losses.

Needless to say, the protest marked an end to all of that, and the beginning of a renewed CONAIE.

This can only mean change. After all, CONAIE has played a major role in “overthrowing three presidents in the past decade,” as Duroyan Fertl notes for the Green Left. “Their renewed strength means they are likely to demand meaningful change” — and, if need be, bring it themselves.

The mobilization also marked something important — “growing social movement unity and independence from the government of President Rafael Correa,” says Denvir. “Activists say that this week’s mobilizations are the beginning of a larger movement to confront Correa’s environmental policies. Correa scored a huge political victory in September when voters overwhelmingly approved a new constitution, weakening the traditional political parties and business elites. Social movements, and the indigenous movement in particular, were instrumental in mobilizing their members to vote ‘yes.'”

It’s an irony heard ’round the world, since Correa says indigenous people aren’t a part of any ‘real’ political body–a view he holds for anti-mining activists as well.

As far as he’s concerned, they’re all just a bunch of irrational troublemakers, or, to be more precise: lunatics, terrorists, extortionists, foreigners, romantic environmentalists, and “childish leftists who want to destabilize the government.”

Somebody should tell him the meaning of democracy. His job may very well depend on him knowing it.