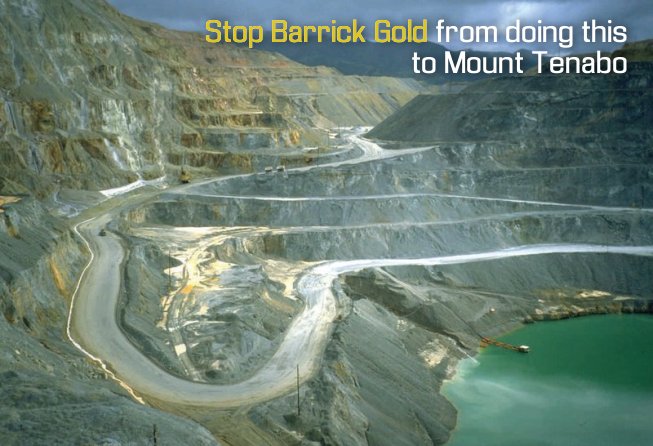 Mount Tenabo, an area of major cultural and Spiritual importance to the Western Shoshone People, is now facing imminent destruction. Last week the U.S. Department of Interior gave the Canadian mining company Barrick Gold approval to go ahead with its massive cyanide heap leach gold mine known as the Cortez Hills Expansion Project.

As Explained in an action alert (reproduced below) that was just sent out by the Western Shoshone Defense Project, the company plans to blast a 900-acre pit into the side of the Mountain, and construct several waste disposal and processing plants that will handle millions of tons of waste.

In the end, the mine will destroy an est. 6,800 acres of land, fracturing along with it the spiritual life and cultural practices of the Shoshone People. This is despite years of objections from the Shoshone and countless supporters around the world.

According to the action alert, Barrick may get started on the project as soon as next week. There’s a small chance it will be delayed, however. On November 20, the South Fork Band Council of Western Shoshone, the Timbisha Shoshone Tribe, the Western Shoshone Defense Project, and Great Basin Resource Watch filed a complaint with the Reno Federal District Court that seeks declaratory and injunctive relief to stop the mine.

Hopefully the court will choose on the side of justice and block the company from proceeding. If it does not, then the Shoshone may have no choice but to come together to protect their land and way of life. In other words, to themselves become a mountain.

For more information on Project and the legal challenge, please visit www.gbrw.org and www.wsdp.org

November 20, 2008 Reno and Crescent Valley, NV – Last week, after years of determined opposition from Western Shoshone, the U.S. Department of Interior, through its Bureau of Land Management (BLM), approved one of the largest open pit cyanide heap leach gold mines in the United States on the flank of Mount Tenabo – an area well-known for its spiritual and cultural importance to the Western Shoshone. The area is home to local Shoshone creation stories, spirit life, medicinal, food and ceremonial plants and items and continues to be used to this day by Shoshone for spiritual and cultural practices. Over the years, tens of thousands of individuals and organizations from across the United States and around the world have joined with the Shoshone and voiced their opposition to this mine. The mine has been referred to as one of the most opposed mines in the world and indeed the level of public opposition is unprecedented for the BLM. With the threat of mine construction beginning as early as this week, the South Fork Band Council of Western Shoshone, the Timbisha Shoshone Tribe, the Western Shoshone Defense Project, and Great Basin Resource Watch, today filed a complaint in the Reno Federal District Court seeking declaratory and injunctive relief to stop the mine.

Barrick Gold Corporation, the world’s largest gold mining company, headquartered in Toronto, Canada, plans to construct and operate the mine, known as the Cortez Hills Expansion Project. The Project area is located entirely within the territory of the Western Shoshone Nation, recognized in the 1863 Treaty of Ruby Valley. The Mine would blast and excavate a new massive open pit on Mount Tenabo over 900 acres in size, with a depth of over 2,000 feet. It would include several new waste disposal and processing facilities (including a cyanide heap-leaching facility), consisting of approximately 1,577 million tons of waste rock, 53 million tons of tailings material, and 112 million tons of spent heap leach material. The Mine would include an extensive groundwater pumping system to dewater Mount Tenabo (in order to keep the open pit and mine workings dry during mining) and associated water pipelines that will transport the pumped water away from Mount Tenabo. In total, the mine would permanently destroy approximately 6,800 acres land on and around Mount Tenabo, over 90% of which is classified as federal “public” land.

“How are we, as a nation, showing our values, if we allow a transnational corporation to destroy this ‘church’ for all time, just to get 10 years worth of gold.” Says Larson Bill, Vice-Chairman of the South Fork Band Council. “There are dozens of active gold mines on Western Shoshone lands already, there is no need for this one, which is clearly immoral and irresponsible. The public should be aware that Nevada is not a waste land, but is the home of ranchers, sportsmen, fishermen and homesteaders that have enjoyed the lands alongside the Shoshone people for generations. We have been clear in our opposition to this mine and while Barrick tries to cloud the real issues with gifts and money, we continue to oppose this project – they have not bought our people, the traditions nor the lands of the Shoshone.” he adds.

The proposed mine area has been found by the BLM, in repeated ethnographic studies, as being of extreme spiritual and cultural importance to the Western Shoshone. One report says: “Mt. Tenabo is … considered a traditional locus of power and source of life, and figures in creation stories and world renewal. As the tallest mountain in the area – the most likely to capture snow and generate water to grow piñon and nourish life – it is literally a life-giver. Water is to earth what blood is to the body, and these subterranean waterways are likened to the earth’s arteries and veins.”

Carrie Dann, a world renowned Western Shoshone elder, and recipient of the Right Livelihood Award (known as the “alternative Nobel Peace Prize”) has been among those to lead the fight to protect Mount Tenabo from mining for over 15 years. “Mount Tenabo should be left alone – no further disturbance. This mine will drain the water from Mount Tenabo. They will be sucking the water out of the mountain forever. The destruction of the water is like the destruction of the blood of the earth; you are destroying life of the earth and the people and wildlife that depend on it. Dewatering is taking the life of future generations. Water is sacred, all life depends on it,” says Carrie Dann.

“Next week we celebrate Thanksgiving – The question that the courts and the people of this country need to ask themselves is will we continue to tolerate these violations against the First Peoples of this land or will we finally turn the tide of injustice and protect these sacred areas?” Says Julie Cavanaugh-Bill, Consultant to the Western Shoshone Defense Project.

“None of us are opposed to mining, if it is done responsibly, however this project is as irresponsible as it gets. The BLM has a legal responsibility to protect the air, water, and ecological values of the area as well as the religious freedom of Western Shoshone, and to fully analyze the impacts of a proposed project. In each case, this mine would clearly violate the law.” Says Dan Randolph, Executive Director of Great Basin Resource Watch. “This is an example of how the Bush Administration is rushing to protect their corporate friends in their last few months in power. The BLM denied requests to extend the comment period on the Environmental Impact Statement not only from us, but also from several Western Shoshone tribal governments. Therefore, we are forced to now turn to the courts to stop this project. We know that Barrick will begin work on the mine as soon as they can, to cause enough harm in an attempt to make the religious rights arguments moot, and the BLM and Bush Administration appear to be more than willing to help them in every way possible.”

The plaintiffs are being represented in court by Roger Flynn of the non-profit legal firm, the Western Mining Action Project, which specializes in mining, public land, and environmental law.

For more information on the Cortez Hills Project, Mount Tenabo, and the legal challenge go to www.gbrw.org and www.wsdp.org