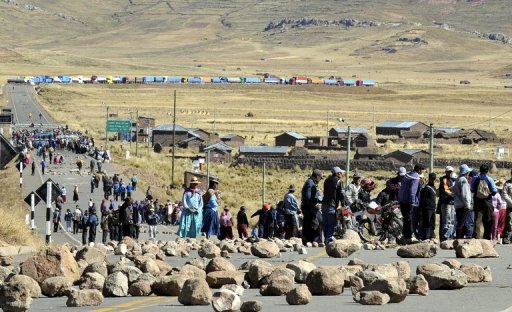 More than 10,000 Aymaras are saying "NO" to a Canadian-owned silver mine. Photo servindi.org
Support our journalism. Become a Patron!

In this video, Al Jazeera’s Craig Mauro reports on a massive, ongoing protest against a new Canadian mine in southeast Peru.

For the past three weeks, more than 10,000 Indigenous People, mostly Aymaras, have been protesting against the oncoming Santa Ana silver mine in southeastern Peru near the border with Bolivia.

The Indigenous people are concerned that pollution from the new mine would threaten their livelihoods and contaminate local rivers and lakes. For those reasons, the protesters want to see the Peruvian government revoke the mining license it granted to the company behind the mining project, Canada’s Bear Creek Mining Corporation. The protesters are also calling for a definite ban on all mining in the region.

The massive protest, for which the Aymara and some Quechua have set up a sequence of blockades along a 300km stretch of road on both sides of border, was facing a media blackout until this past weekend.

On May 27, a number of government buildings in the Peruvian border town of Puno were looted and set ablaze.

That seemed to give the media what they needed; however, the organizers of the protests are insisting that they aren’t responsible for the violent lash out. Rather, they say, it was brought on by individuals who have infiltrated the protests.

In hand with the lack of media coverage, the police and military presence throughout the protest has been almost non-existent. On May 28, Reuters reported that President Garcia has indeed authorized the military to “maintain order”, but so far they haven’t tried do so.

That’s partly because of the sheer scale of the protest; but moreso because of the upcoming presidential election in Peru, which is set for June 5. According to Reuters, Garcia has stated that he won’t give the order to stop the protests until after the election concludes.

There was, however, at least one violent confrontation before the protest was in full swing. As noted on the WW4 Report,

At least one is reported dead in Peru’s southern region of Puno after the National Police fired on protesters April 26, the second day of a 48-hour civil strike or paro called by campesino groups to demand a halt to local mining and petroleum leases. The deceased, identified as María Choque Limache, 61, died after inhaling tear gas as police broke up a protest at the village of Yohoroco, in Huacullani district of Chucuito province, according to Walter Aduviri Calisaya, president of the Puno Front for the Defense of Natural Resources. National Police commander Jaime Cordero Ayala denied this version of events, insisting she had not been at the protest and had died of natural causes.

Most recently, on May 29, the protesters rejected a deal to stand down in exchange for a 12-month moratorium on mining. Negotiators for the protesters initially agreed with the offer, but the protesters themselves said they won’t settle for anything less than a definitive ban on mining which must be ratified through a presidential decree.